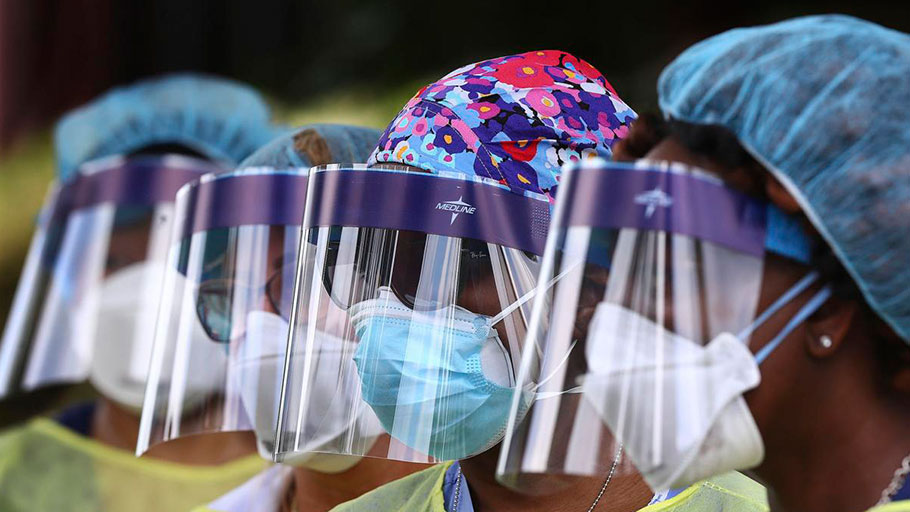 In clamor to reopen, many black people feel overlooked

You Are Here: Home » Blog » COVID-19 (Coronavirus) » In clamor to reopen, many black people feel overlooked

May 4, 2020 – Volunteers line up to begin taking hundreds of free COVID-19 tests at a pop-up site at the House of Hope in Decatur, Ga. Many African Americans watching protests calling for easing restrictions meant to slow the spread of the new coronavirus see them as one more example of how their health, their safety and their rights just don’t seem to matter. Photo by Curtis Compton

BIRMINGHAM, Ala. (AP) — Many African Americans watching protests calling for easing restrictions meant to slow the spread of the new coronavirus see them as one more example of how their health, their safety and their rights just don’t seem to matter.

To many, it seems that the people protesting — who have been predominantly white — are agitating for reopening because they won’t be the ones to suffer the consequences. So far, the facts are proving them right: The consequences of keeping some businesses open have been falling disproportionately on the shoulders of black people and other marginalized groups.

“There has always been a small, white ruling class that has been OK with seeing certain populations as disposable,” said LaTosha Brown, founder of the Black Voters Matter Fund, a power-building organization based in the South.

The pandemic has highlighted — and often deepened — gaping inequalities in the United States and around the world.

Black people are dying in disproportionate numbers from COVID-19 in the United States; people of color are especially exposed because they are more likely to hold many of the jobs that were deemed essential; and, as the reopening starts, they are likely to be among those whose workplaces open first. For instance, in New York City, the epicenter of the U.S. outbreak, black people make up just under 25% of the population, but more than 40% of public transit workers.

Delmonte Jefferson, a black public health professional in Atlanta, said African Americans and other people of color want to mitigate the economic damage as much as anyone else — especially since those groups are among the ones who are suffering the most from the downturn. But they don’t want a return at all costs, he said.

“Even the thought of opening the country back up shows that African Americans aren’t being valued,” said Jefferson, executive director of the Atlanta-based National African American Tobacco Prevention Network.

Some “reopen” protests have included black speakers, and a handful of black people have attended. But images of the rallies and Facebook pages dedicated to the movement indicate the vast majority of supporters are white.

Demonstrators from Alabama to Michigan haven’t focused on race. Instead, they advocate preserving constitutional freedoms and talk about the catastrophic toll on small businesses. The protesters have included organized groups like anti-vaccine advocates, gun-rights supporters and even a militia, and many have expressed support for President Donald Trump, reflecting the way the discussion has become partisan.

But many African Americans say the fact that protesters are advocating a riskier path reveals a privileged position — as does their ability to flout social-distancing rules and even brandish weapons.

The complaints from protesters that their rights are being trampled, for instance, comes across as misinformed and misguided to racial minorities who have been oppressed for generations, said Nadia Richardson, who heads No More Martyrs, a nonprofit focused on the mental health of black women.

“It looks like from that perspective (it’s) a group of people who don’t really understand what it is to have your rights violated,” said Richardson.

Groups including the NAACP, meanwhile, have called for greater government action to prevent the virus’ spread in response to statistics showing that COVID-19 is killing disproportionate numbers of black people.

An Associated Press analysis of available state and local data shows that nearly one-third of those who have died are African American, with black people representing about 14% of the population in the areas covered in the analysis.

The toll in black communities, leaders say, reflects systemic policies that have made many African Americans far more vulnerable to the virus, including unequal access to health care and economic opportunity. That means many will face an untenable choice: go back to work or face unemployment with no benefits, said Antonio Lightfoot, an organizer for the Workers Center for Racial Justice in Chicago.

The Rev. William J. Barber, who advocates for groups that often perform front-line jobs, said black people aren’t the only ones being devalued.

“The issue is not what these protests are saying to just black people but what they are saying to poor and low-income people who are the most impacted,” said Barber. “Invitations to open up society and encourage people to return to their routines is an invitation to death.”

Nearly 70,000 people have died from the coronavirus in the United States, according to a tally compiled by Johns Hopkins University from official government numbers, although the true figure is likely higher. Most people who get infected suffer only mild or moderate symptoms, but some, especially the elderly and those with other health problems, become seriously ill.

As the debate over reopening has become increasingly heated, some have used racist language or symbols.

Democratic Atlanta Mayor Keisha Lance Bottoms, who is black and has been an outspoken critic of Republican Georgia Gov. Brian Kemp’s decision to allow some businesses to reopen, recently tweeted an image of a text message that demanded she reopen Atlanta and called her a racial slur. Confederate flags have been visible at some demonstrations, but far more American flags are evident.

Although Americans remain overwhelmingly in favor of stay-at-home orders and other restrictions, a survey conducted in mid-April from The Associated Press-NORC Center for Public Affairs Research revealed a partisan divide.

The survey showed that while majorities of Democrats and Republicans thought restrictions where they lived were about right, Republicans were roughly four times as likely to think they went too far — 22% versus 5%. The largely white protest attendance might simply reflect that divide since black voters are more likely to be Democrats.

Deanna Reed, who is black, has helped her church set up drive-thru virus testing and has personal reasons for wanting to maintain social distancing: Her mother works in a shipping facility where she has to provide her own masks and gloves.

“Just having to see my mom go out is tough,” said Reed. “I pray for her safety daily.”

Associated Press writer Aaron Morrison contributed to this report from New York. Morrison and Reeves are members of the AP’s Race and Ethnicity team. Follow Reeves on Twitter at https://twitter.com/Jay—Reeves. Follow Morrison at http://twitter.com/aaronlmorrison.