For many cautious African Americans, the move to reopen America is not a ‘black friendly’ campaign

You Are Here: Home » Blog » News & Current Affairs » For many cautious African Americans, the move to reopen America is not a ‘black friendly’ campaign 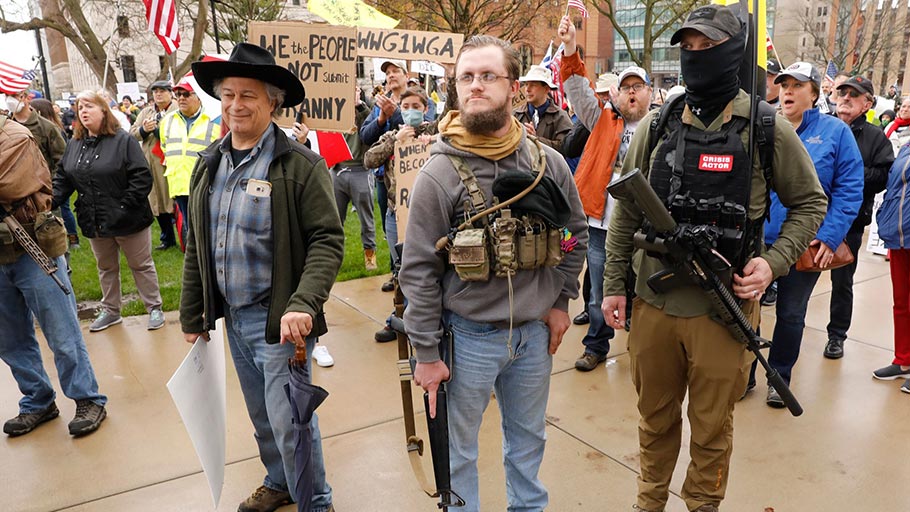 Armed protesters provide security as demonstrators take part in an “American Patriot Rally,” on the steps of the Michigan State Capitol in Lansing, on April 30, 2020. Jeff Kowalsky, AF, Getty

“Nothing about this movement is really black friendly.”

As protests erupt over stay-at-home orders and the clamor to reopen the economy becomes louder, the coalition of people storming state Capitols — some armed with semi-automatic weapons and most not wearing masks or observing social distancing guidelines — have had one thing in common: Almost all of them are white.

African Americans, for the most part, are not joining the crowds in California, Michigan, Georgia, Wisconsin and other parts of the country to demand that local governments reopen their cities.

For many black Americans, the general perception is that the throngs of white protesters are steeped in racism, white supremacy and anti-black sentiments. And so many black Americans would feel unwelcome — and perhaps afraid — given the presence of Confederate flags, swastikas and hangman’s nooses. 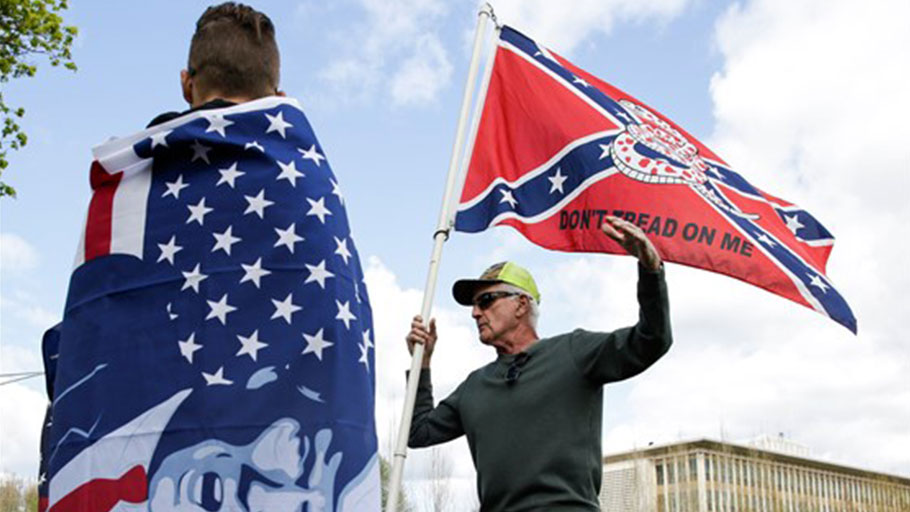 A protester holds a flag that combines a Gadsden flag from the American Revolution with a Confederate flag during a demonstration against Washington state’s stay-home order at the state capitol in Olympia, Wash., on April 19, 2020. Jason Redmond, AFP, Getty

“This is identity politics, this is not COVID-19 as an actual issue, said Dr. Samuel K. Roberts, director of Columbia University’s Institute for Research in African American Studies and an epidemiologist. “First of all, if you look at who these people are, I don’t know many black folks of any political stripe that would want to be in that crowd.”

“These are the same people who called Obama all sorts of names, racist epithets, a lot of them overlap with the Tea Party, which was a very racially charged movement,” Roberts said. “Nothing about this movement is really black friendly.”

Black Americans are dying in disproportionate numbers from COVID-19 in the United States; people of color are especially exposed because they are more likely to hold many of the jobs that were deemed essential; and, as the reopening starts, they are likely to be among those whose workplaces open first. For instance, in New York City, the epicenter of the U.S. outbreak, African Americans make up just under 25% of the population, but more than 40% of public transit workers.

Delmonte Jefferson, a black public health professional in Atlanta, said African Americans and other people of color want to mitigate the economic damage as much as anyone else — especially since those groups are among the ones who are suffering the most from the downturn. But they don’t want a return at all costs, he said.

“Even the thought of opening the country back up shows that African Americans aren’t being valued,” said Jefferson, executive director of the Atlanta-based National African American Tobacco Prevention Network.

Despite the ongoing protests and willingness of some states to reopen aspects of their economies, some black leaders have been adamant that communities of color stay at home given that COVID-19 is disproportionately affecting African Americans, Latinos and Native Americans.

“We, the undersigned, have joined together to state our unequivocal and firm opposition to the premature effort of governors to willfully reopen their states,” read a statement signed by among others, Sherrilyn Ifill, president and director-counsel of the NAACP’s Legal Defense and Education Fund;, the Rev. Al Sharpton, head of the National Action Network; and Marc Morial, president of the National Urban League. “We regard this pandemic as a grave threat to the health and life of our people.”

Officials who have been critical of the demonstrations have also been careful to downplay them, even as they acknowledge that race and racism is a factor.

Michigan Gov. Gretchen Whitmer told Politico that while the protests at the state Capitol evidenced “some of the worst racism and awful parts of our history in this country” she was quick to say that it was “a small group of people” and “not representative of who we are in Michigan.”

In contrast to Whitmer, President Donald Trump, who has been agitating for the country to reopen the economy, referred to the protesters as “very responsible” and “very good people.”

That echoed his comments about white nationalists and white supremacists who precipitated the violence in Charlottesville, Virginia, during a march in August 2017 that left one woman dead.

Trump advised Whitmer to “make a deal” with the protesters. Others in his administration have been more circumspect and addressed the protests in narrow terms.

Dr. Deborah Birx, coordinator of the White House’s coronavirus response team, said the protests were “devastatingly worrisome,” not because of the hate symbols on parade, but because protesters were not practicing social distancing.

The protests across the nation have not been uniform. Some are seemingly spontaneous and large, like those in Southern California that popped up around the closure of beaches by Gov. Gavin Newsom. Others, like those in Michigan, Kentucky and Wisconsin that attracted white supremacists and militias, were smaller but more organized, and were targeted and funded by a coalition of well-heeled right-leaning organizations.

Some black activists have said that these are not really in service to any broad-based communities, but to the president himself. And others say that for many African Americans deciding whether to join the protesters all boils down to trust.

“They are distrustful of the government in service of Trump, and that is a very distinctive political identity,” said Jessica Byrd, an electoral organizer and member of M4BL (Movement For Black Lives).

“Trump has had a clear vision of dismantling the government in service of himself and white nationalism from the beginning, and his supporters have rallied around him because of that vision,” she said.

“There is a level of skepticism that we as black people have always had about the government even as we were organizing for access to democracy and access to services,” Byrd added. “But black people are in their communities, holding each other accountable, and saying, yea, we might be skeptical, but not enough to risk our families. We can agitate but that doesn’t mean we are not in deep service to each other.”

Roberts, author of “Infectious Fear: Politics, Disease and the Health Effects of Segregation” (UNC Press, 2009), acknowledged that while the hard-core protesters may number only in the hundreds or thousands, dismissing them as fringe would be foolhardy.

Coronavirus Is Making the Case for Black Reparations Clearer Than Ever

Coronavirus Is Making the Case for Black Reparations Clearer Than Ever
We Need Your Support — Donate, Share, Sign-Up Ways to Support