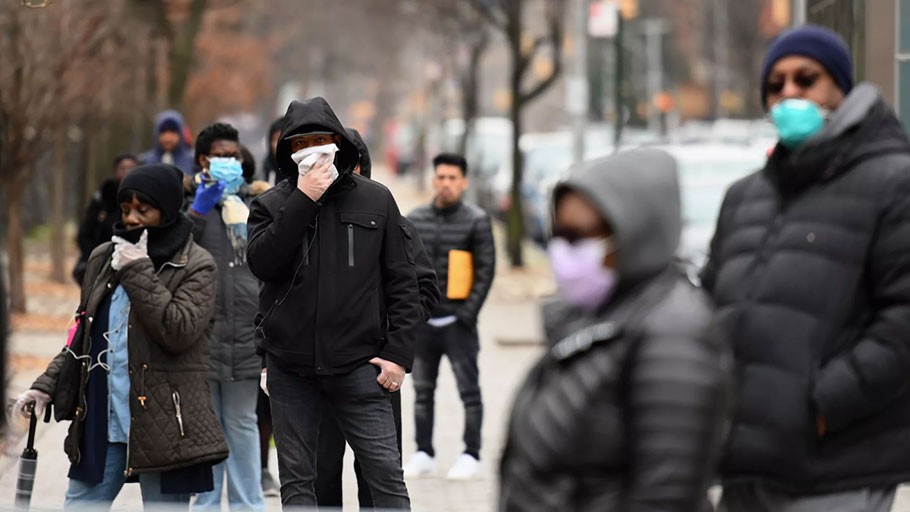 Coronavirus Is Making the Case for Black Reparations Clearer Than Ever

You Are Here: Home » Blog » Commentaries/Opinions » Coronavirus Is Making the Case for Black Reparations Clearer Than Ever

People who believe they have COVID-19, and who meet the criteria, wait in line to be pre-screened for the coronavirus outside of the Brooklyn Hospital Center on March 20 in Brooklyn, New York. Photo Angela Weiss, AFP, Getty.

By William A. Darity Jr. and A. Kirsten Mullen, Newsweek —

The COVID-19 crisis only heightens the urgency of black reparations. Long overdue, they are now more essential than ever.

So what explains these disproportionately large numbers of black people dying of the coronavirus?

Black people are overrepresented in jobs designated as socially essential but paying low wages in transportation, food and health services, as well as child and elder care. These are jobs where the physical distancing now needed for health safety is not possible. Consequently, African Americans are reduced to a Hobson’s choice: either having a greater risk of outright job loss or continuing employment in unsafe occupations. Horrifying as these deprivations are, they are not new. They are just the latest example of how racism and discrimination play out in America.

There have been numerous historic moments when America could have eliminated racial inequality and granted blacks access to the same opportunities as whites. When the nascent republic was formed in 1776, it could have embraced black people as full citizens. At the end of the Civil War, when newly emancipated African Americans were promised 40-acre land grants, the country could have reversed many of the economic effects of enslavement. Black enfranchisement could have been protected during the Reconstruction era, and anti-lynching laws could have been passed, reversing the trajectory of racial injustice. The New Deal and the GI Bill, had they been administered equitably, could have given African Americans the kind of financial cushion so desperately needed now. And when, nearly 60 years ago, civil rights legislation was passed, the legislation was weakly enforced, and with it the nation lost another chance to become a true democracy.

The denial of the promised 40-acre land grants for newly emancipated blacks at the end of the Civil War was accompanied by the award of large tracts of land to whites. These awards are what Neel Kashkari calls “free equity.” In this case, one group is provided a gift of a lucrative asset. Kashkari, the Federal Reserve Bank of Minneapolis president, defines free equity as unearned or unmerited gifts that provide a substantial boost toward economic security and well-being.

Kashkari is referring to the 1862 Homestead Act and the Southern Homestead Act of 1866. These initiatives made grants of 160 acres to heads of household, for a minimal filing fee, with the goal of occupying the western territories. These outright gifts of real estate and its use privileges, to encourage settlements and farms, could be handed down to subsequent generations. With extremely rare exceptions, black people were systematically excluded from these programs, leaving them without any subsequent margin of protection, including the current economic collapse.

So, what, exactly, do we mean by black reparations?

Black reparations refer to America’s denial of the promised 40-acre land grants to newly emancipated black people at the end of the Civil War. The long-term effect is black American descendants of persons enslaved in the United States constitute 13 percent of the nation’s population but possess less than 3 percent of the nation’s wealth. At the household level, the gap constitutes a black deficit of $800,000 in average net worth. To bring the native black share of the nation’s wealth at least into equivalence with its share of the population would require $10 trillion to $12 trillion.

A suitably crafted reparations initiative can erase the racial wealth gap by raising the black level to equal the existing white level. Indeed, as we write in our new book, From Here to Equality: Reparations for Black Americans in the Twenty-First Century, “We view the racial wealth gap as the most robust indicator of the cumulative economic effects of white supremacy in the United States.”

Without the cushion of wealth, black families are exposed to greater vulnerabilities. The hard realities of the pandemic make this painfully clear. Wealthier families can better negotiate unpredicted losses of income due to unemployment, vehicle breakdown or catastrophic illnesses. Typically, black workers toil in low-wage jobs, living from paycheck to paycheck. The black unemployment rate generally is double the white unemployment rate; the implications are ominous when the overall unemployment rate is projected to reach 30 percent.

hy does the pandemic intensify the urgency of a reparations program?

The black-white mortality disparity can be attributed, in part, to the disproportionate presence of pre-existing conditions, including asthma, diabetes, heart disease and hypertension. This is aggravated by inequitable medical treatment.

The deeper root of black susceptibility to COVID-19 is greater black financial peril, indexed by the gulf in black and white wealth. Four white American billionaires—Jeff Bezos, Bill Gates, Warren Buffett, Mark Zuckerberg—have about as much wealth as 90 percent of black Americans.

The federal government can pay for reparations. The rapid enactment of the legislation of a $2.2 trillion economic rescue package proves Congress can find the needed money when motivated to do so. We know, now, the debt can be paid. We only need the will to do it.

William A. Darity Jr. is the Samuel DuBois Cook Professor of Public Policy, African and African American Studies and Economics at Duke University. A. Kirsten Mullen, the founder of Artefactual, is a folklorist, museum consultant and lecturer whose work focuses on race, art, history and politics. Their book, From Here to Equality: Reparations for Black Americans in the Twenty-First Century, is newly available from the University of North Carolina Press.