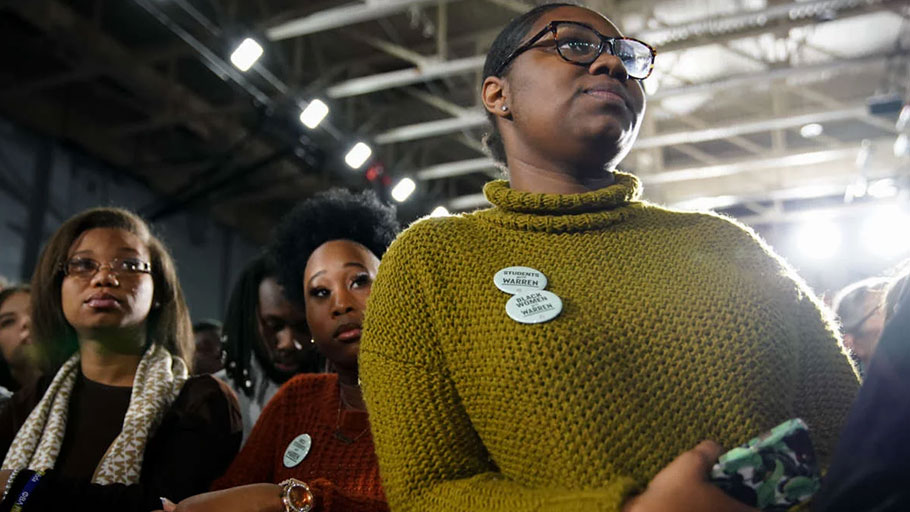 Black America May Decide the Fate of the Democratic Party

You Are Here: Home » Blog » Editors' Choice » Black America May Decide the Fate of the Democratic Party

“There are seven white people on this stage talking about racial justice,” said former South Bend Mayor Pete Buttigieg last night at the Democratic debate in South Carolina. The debate in Charleston quickly became a rhetorical tug-of-war between presidential candidates vying for Black votes. They fought over stop and frisk, loyalty to Obama and redlining.

The high–stakes backdrop of the February 25 debate was the collapse of neoliberal politics in the face of a rising progressive wing led by Sen. Bernie Sanders. Sanders won the Nevada caucus. If he sweeps Super Tuesday, he wins the nomination. Centrist Democrats desperately hope Black voters will save them. During the debate, former Vice President Joe Biden repeated a story that has been echoed nonstop in mainstream media — the idea that Black voters will revive his campaign long enough for him to stop Sanders.

The racial paternalism of Biden and the Democrats has made them miss how savvy the Black electorate is to shifting political winds. First, working–class people of color — and working-class Black people specifically — endure higher economic anxiety than white workers; it is a mistake to assume that arguments grounded in economic justice don’t resonate with voters of color. Second, a generational split has opened up: Youth of color are open to a Democratic Socialism that speaks to debt, climate change and heath care. Those fault lines have broken the centrist hold on our political imagination. They are why Sanders runs neck to neck with Biden in South Carolina and leads his rivals in polls nationwide. Black voters want to win not just an election but our future.

“The people know me,” Biden said in the debate. “My entire career has been wrapped up in dealing with civil rights and civil liberties … I will win the African-American vote here in South Carolina.”

Biden fancies himself the expert on race in the U.S. His bona fides are being the only white lifeguard at a Black swimming pool, squaring off with a Black gang leader named Corn Pop (I’m not making this up), championing legislation in the Senate to stop busing in the late ‘70s, championing a 1994 crime bill that increased mass incarceration, and being chosen as the white vice president sidekick to the first Black president in order to ease voters’ racial anxiety.

How can someone with this track record speak so confidently about getting the Black vote? Biden’s ease rests upon a violent history that left an imprint on Black voting patterns. After the Civil War, the 14th and 15th Amendments granted former slaves citizenship. Ex-Confederates passed the 1865 Black Codes, and Ku Klux Klan mobs attacked Black neighborhoods leaving dead people and burnt churches. In 1866, Radical Republicans sent federal troops into the South to guard Black lives, property and rights. President Rutherford Hayes pulled them out in 1877, and white supremacist “Redeemers” came to power. Eighty-seven years later, the Civil Rights Act of 1964 restored Black voting rights. The legacy of that violence made the Black electorate a cautious voting bloc. The foremost goal for many Black voters was to protect civil rights against racial conservatives, who have now coalesced in the Republican Party.

The debate in Charleston quickly became a rhetorical tug-of-war between presidential candidates vying for Black votes.

In this light, Black voters often valuing electability and loyalty over progressive policy and identity can be understood. It began in 1960, when John Kennedy called Judge J. Oscar Mitchell to get Martin Luther King Jr. released on bond. Kennedy won a hairline victory due to Black voters. His vice president, Lyndon B. Johnson, cemented that coalition with the Civil Rights Act.

Each Democratic president that followed — be it Jimmy Carter, Bill Clinton or Barack Obama — used the Black voting block to build a winning coalition. In turn, African Americans in states like South Carolina had a preeminent place to decide who advanced to nomination. Neither progressivism nor identity was enough: In 2004 they largely did not support Howard Dean despite his liberal policies. In 2008 they did not trust then–candidate Obama, despite a shared identity, until he won nearly all–white New Hampshire. In 2016, former Secretary of State Hillary Rodham Clinton knocked Senator Sanders out in South Carolina, despite his more left policies.

Here is the contradiction. Black America needs left policies to alleviate chronic poverty, reverse voter suppression and expand social services. Yet, from Carter to Obama, the Democratic Party has repeatedly taken neoliberal positions but counted on cautious Black voters to be a centrist bottleneck to stop challenges to the status quo. The Democratic Party counts on Black fear. This strategy implicitly invokes a tradition of racial paternalism that began as a safeguard against white supremacist terror to stop a worker’s movement.

Challenges to the Racial Paternalism of the Democratic Party

By the 1990s, a cycle had been set in place. Black voters showed up for Democrats at the polls but got little in return. It was tokenism, not systemic change.

“Double unemployment in Black communities, we’re four times more likely to go to jail for the same crime, and we cannot get Democrats to deal with it,” Rev. Al Sharpton said in the 2004 presidential debate. “We helped take you to the dance and you leave with right wingers, you leave with … swing voters.”

After Obama’s 2008 and 2012 victories were secured by a high Black turnout that balanced out the loss of some white voters, the parties have become even more racially polarized.

This week, in February 2020, 16 years after Sharpton said Black voters were taken for granted, Democratic presidential hopefuls gathered on stage in South Carolina and competitively pandered to Black voters. At the debate in South Carolina, Biden criticized Sanders for being disloyal to Obama. Bloomberg and Buttigieg rhapsodized on racism’s pain. Bloomberg apologized for stop and frisk. Sen. Elizabeth Warren called Bloomberg out for redlining. She even supports reparations. They all know they need Black voters to win the primary and ultimately, the presidency.

The question that is left is what do Black voters need? The era of centrist Democratic racial paternalism has come to a close. It is a time of change. In a CBS This Morning segment, reporter Gayle King interviewed elderly Black voters called “The Reckoning Crew” who are all in for Biden, and in the next segment, three youths of color — one for Buttigieg, one for Warren and one for Sanders.

The fault lines were visible. They reflect the complex and dynamic state of Black voting today. The youth have split from the old. The upper and middle classes are split from the poor. More importantly, what it means to be liberal or conservative has shifted. According to The Washington Post, citing a Pew Research Center report, nearly 70 percent of Black Democrats consider themselves moderate or even conservative. They can be socially conservative on issues like gay rights or hold that personal responsibility matters more than systemic discrimination. Or a third believe abortion should be illegal. And yet, on economic questions, Black voters can be very liberal, specifically on the need for good–paying work. Many are a part of a “precariat” working class who work in service, retail or care. Many are women. Many are drowning in debt. Many are caring for children alone and have scant help. Many had homes that were foreclosed upon. All this stress is toxic to the body. Many have medical bills they can’t pay.

The era of centrist Democratic racial paternalism has come to a close. It is a time of change.

Black America is in a position to decide the fate of the Democratic Party. The future cannot be found in the liberal center. Biden’s support among Black voters is circling the drain. We might witness a sizable part of the Black electorate break away from liberal paternalism and join the multiracial worker’s movement of the Sanders campaign.

Rapper and activist Killer Mike has crisscrossed the nation as a Sanders surrogate. In a recent ad, he quoted James Baldwin, who asked rhetorically, “You asked my father to wait, my brother to wait. How long must I wait for freedom?”