Black-ish Embraces the Urgency of History

You Are Here: Home » Editors' Choice » Black-ish Embraces the Urgency of History 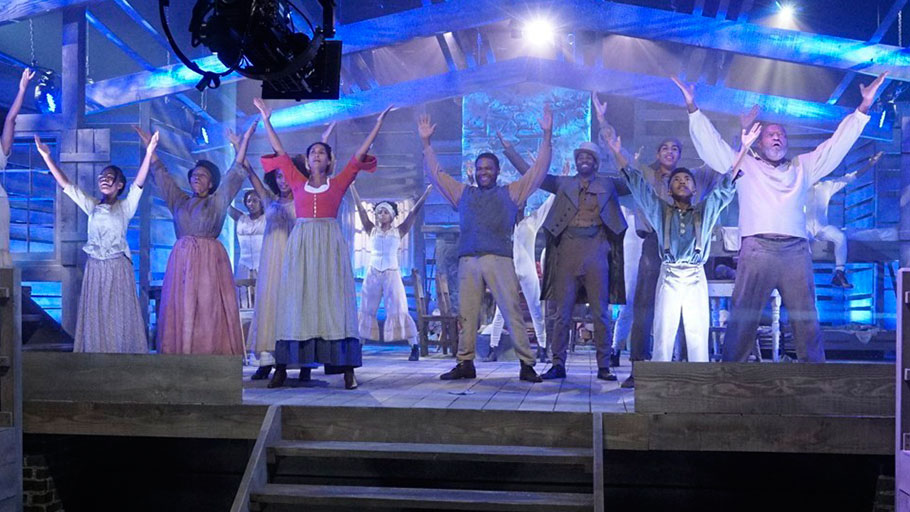 The show’s fourth-season premiere, “Juneteenth: The Musical,” is a comedy. And a work of education. And an indictment.

By Megan Garber, The Atlantic —

This post contains spoilers for Season 4, Episode 1 of Black-ish.

The sitcom, traditionally, is a form that revels in insularity. The small collection of close-knit characters; the settings—the office, the kitchen, the living-room couch—that remain relatively unchanged over weeks and months and years; the repeating jokes; the knowing call-backs. The familiarity, the reliability, the stasis. The constraints are part of the emotional contract sitcoms generally make with their audiences: easy laughs, low demands, situations that may vary but comedy that will not.

Every once in a while, though, a show will break out of the comfortable paradigm to engage in something much more productive than comfort alone—every once in a while, a primetime network sitcom will double as an urgent argument about the way we live now and the way we might live better. Black-ish, on ABC, offers episodes like that as a matter of course, and the show’s Season 4 premiere, “Juneteenth: The Musical,” is the most powerful breakout so far. Tuesday evening’s Black-ish is, as its title suggests, largely a musical episode, inspired in turns by Hamilton and Schoolhouse Rock! It is also, as its title further suggests, a consideration of a holiday that is not (yet) nationally celebrated—and, in that, also a meditation on cultural memory and national apology and monuments and flags and kneeling and history as something that is both shared among all Americans and extremely biased in its vision.

“Juneteenth: The Musical” begins in that classic sitcomic situation: the school play. The performance, in this case, is celebrating Columbus Day, and the show includes the familiar incantations (“in fourteen-hundred ninety-two, Columbus sailed the ocean blue … ”). Dre, from the audience, gazes on this childishly sanitized treatment of the past: “Fake history,” he mutters to Pops. He points out the irony involved when a nation gives Christopher Columbus his own holiday but does not mark the day that slavery, officially, ended. “We celebrate a horrible man,” Dre points out, “when we don’t even acknowledge important moments in our own history—like Juneteenth.”

From there, things expand—beyond Columbus, beyond the Johnsons, beyond the confines of the show itself, to offer a sweeping, and corrective, lesson in history. Dre, with the help of Aloe Blacc, who is ostensibly at Stevens & Lido to help with an unrelated ad campaign, creates a musical number that explains the significance of Juneteenth (in this case, to Dre’s bumbling white co-workers, gathered around the civic space that is the office conference table). The song, animated and set to the tune of Schoolhouse Rock!’s “I’m Just a Bill,” is performed by The Roots—Questlove is animated in the video—and its recitation of history is made all the more cutting against the tune of that familiar primer of American democracy: “I am a slave, yes I’m only a slave, they’ll place my body in an unmarked grave.”

Things expand again, as Dre—initially only passingly familiar with the history of Juneteenth—himself learns more about the holiday. And his education on the matter finally culminates in another musical interlude, this one Hamilton-esque, set in the 1800s, featuring all of the Johnsons as they likely would have been at the time: enslaved. The songs, “We Built This” and “Juneteenth,” are gospel-inflected, and their lyrics, in the manner of the ones created by Lin-Manuel Miranda, are by turns rousing and gutting. (As the Johnsons of the 1800s dream of a better future: “I’m gonna take a vacation, and when I’m gone / They won’t burn crosses on my lawn.”) The choreography features both freestyle dancing and coordinated gestures of bondage. In the final scene from the 19th century, Dre rips off his vest to reveal a decidedly modern T-shirt underneath. “I am my ancestors’ wildest dreams,” it reads.

“Juneteenth: The Musical” in one way follows the tradition of “Lemons,” “The Word,” “Please Don’t Ask, Please Don’t Tell,” and “Hope”—other Black-ish episodes that have abandoned the traditional insularity of the sitcom to grapple directly with the issues affecting viewers’ lives. “Juneteenth: The Musical,” however, is the show’s most ambitious yet—its most powerful reminder of what television can do when it chooses explicit argument over soft escapism.

Kenya Barris, Black-ish’s creator and showrunner, recently described his show’s upcoming season premiere as a “historically significant think-piece” that, in ways both strident and subtle, highlights the hypocrisy of American memory. “If that was the last day when slavery ended in the United States,” Barris said of Juneteenth, “isn’t that really Independence Day? How can we honestly have independence before everyone’s independent, everyone’s free?”

That question is repeated, almost verbatim, by Dre, in the fourth-season premiere. It’s an idea that infuses the episode as it moves from the school auditorium to the office conference room to the cotton fields—an education about, and an indictment of, American history contained within 22 minutes of primetime television comedy. What does “honestly” really mean, the episode asks, when applied to history? What does “independence” really mean? “Even when we were free, we weren’t free,” Dre tells his co-worker, and the rest of the episode proves his point.

The episode ends with a meaningful twist—another way Black-ish has chosen to forego soothing comedy in favor of making a point. As an image of an American flag, red, white, and blue, fades to black and white, a voiceover reminds viewers that it wasn’t until 2009 that the United States officially apologized for slavery. S.Con.Res. 26—Black-ish’s camera pans across the document’s text—acknowledged that “the system of slavery and the visceral racism against people of African descent upon which it depended became enmeshed in the social fabric of the United States.” It called “on all people of the United States to work toward eliminating racial prejudices, injustices, and discrimination from our society.”

The Mounting Attack on Organized Labor and What it Means for African-Americans
We Need Your Support — Donate, Share, Sign-Up Ways to Support