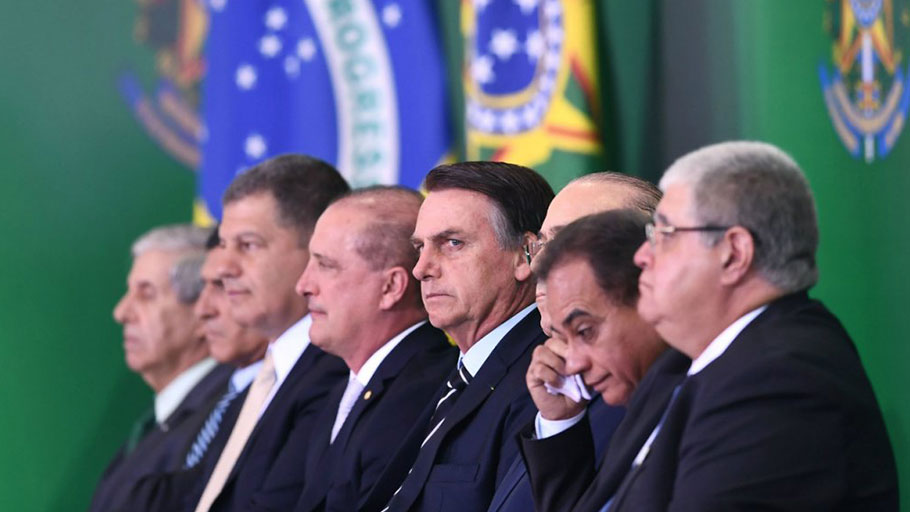 Evaristo Sa, AFP | Brazil’s President Jair Bolsonaro (centre) pictured with some of his ministers in Brasilia on January 2, 2019.

The government of newly inaugurated President Jair Bolsonaro set to work quickly on Wednesday, issuing decrees that lift protections for minorities and reward his allies in agribusiness, while forging closer political ties with the US.

Bolsonaro, a former army captain and seven-term congressman, won elections in October and was sworn in on Tuesday as Brazil’s first far-right president since a military dictatorship gave way to civilian rule in 1985.

In his first order since taking over, Brazil’s new leader stripped the agency in charge of indigenous affairs of the responsibility to demarcate native lands, handing those powers over to the agriculture ministry.

The gift to the powerful agribusiness sector enraged environmentalists already worried by Bolsonaro’s plans to loosen protections of the Amazon rainforest and remove Brazil’s support for the Paris Agreement on climate change.

Areas set aside for “Quilombolas”, as descendants of former slaves are known, will also be affected by Bolsonaro’s decision.

All the president’s men: generals and hardliners to pack cabinet

Another order removed the concerns of the LGBT community from consideration by the new human rights ministry, headed by an ultraconservative evangelical pastor.

Damares Alves, the new human rights minister, did not discuss the LGBT order in her first address on the job, but the evangelical pastor has insisted over the years that “the Brazilian family is being threatened”.

On Wednesday, she said: “The state is lay, but this minister is terribly Christian.”

Bolsonaro has strongly criticised what he calls “gender-based ideology”, describing it is a threat to Brazil’s Christian values.

The newspaper Folha de S.Paulo said Bolsonaro was later expected to announce the closing of an agency within the education ministry that has been aimed at promoting diversity in public schools and universities.

Bolsonaro’s rise to power culminates a swing to conservative rule in Latin America that has isolated leftist-ruled countries such as Venezuela, Cuba and Nicaragua.

A fan of US President Donald Trump, Brazil’s new president on Wednesday met with Secretary of State Mike Pompeo, who said the two countries would jointly defend democratic values in the region.

“We have an opportunity to work alongside each other against authoritarian regimes,” he added after discussing Venezuela with Araujo.

Bolsonaro was elected on a platform to clean up Brazilian politics, and he put the country’s top anti-corruption figure, Sergio Moro, in charge of a justice ministry beefed up to fight graft and battle organised crime.

Moro, a former federal judge who spearheaded the “Car Wash” corruption trials that put former leftist President Luiz Inacio Lula da Silva and other high-profile politicians in jail, said on Wednesday he would help usher in a new era of law and order.

“The top mission given to me by the president was clear: end impunity for corruption cases and combat organised crime to reduce violent crimes,” Moro said after being sworn in.

The administration would propose an ambitious anti-crime bill to Congress next month that would stiffen prison sentences, Moro said.

While Bolsonaro surprised Brazil’s political establishment by surging to victory over a leftist coalition led by Lula’s Workers Party, he takes office with the lowest approval rating of any new Brazilian president, according to a Datafolha poll Tuesday.

That suggests he will have an uphill battle to enact his agenda of austerity measures to bring down a budget deficit of about 180 billion reais ($47.31 billion) that has investors worried.

To pass legislation, he is expected to rely on lobbies in Congress representing the interests of agribusiness and a burgeoning evangelical movement, instead of reaching out to the leaders of other parties.

‘Bolsonaro will have to build coalitions in Congress’

Markets are optimistic that Bolsonaro’s economic team, led by former investment banker Paulo Guedes, will succeed in passing reforms needed to reduce the deficit and restore confidence and growth to a slow-moving economy.

One of Bolsonaro’s first steps was to decree a lower-than-expected increase to the minimum wage for this year, to 998 reais ($260) a month from 954 reais.

Laying out his priorities as finance minister, Guedes singled out pension reform as the most pressing issue facing Brazil.

The University of Chicago-trained economist vowed to slash the state’s outsize role in the economy, cut taxes, carry out privatisations and tame what he said was excessive government spending.

Shares in the country’s largest utility Centrais Eletricas Brasileiras jumped over 10% after Bento Albuquerque, the new energy minister, said the company would be partially privatised.

Doing even better was gun manufacturer Forjas Taurus, whose shares rose 27% on Bolsonaro’s plan to ease gun controls, to help Brazilians arm themselves in self-defence against crime.