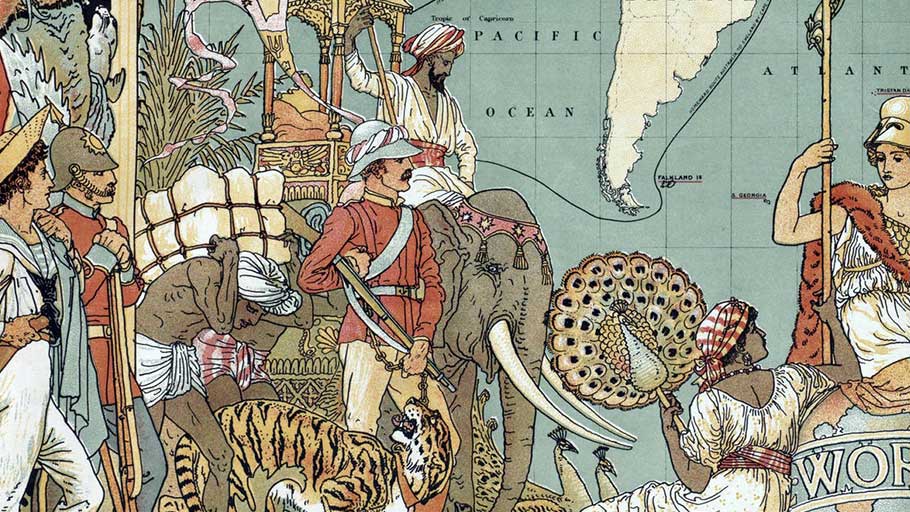 You Are Here: Home » Blog » Editors' Choice » British Empire is still being whitewashed by the school curriculum – historian on why this must change

Imperial Federation Map of the World showing the extent of the British Empire. The Empire in red in 1886, by Walter Crane

By Deana Heath, The Conversation —

Jeremy Corbyn has recently proposed that British school children should be taught about the history of the realities of British imperialism and colonialism. This would include the history of people of colour as components of, and contributors to, the British nation-state – rather than simply as enslaved victims of it. As Corbyn rightly noted: “Black history is British history” – and hence its study should be part of the national curriculum, not segregated in a single month each year.

This is a welcome proposal because, as an academic who teaches modules on South Asian, imperial, colonial and global history, I face an uphill struggle at the start of each new academic year. Many of the undergraduates who greet me know virtually nothing about any of the subjects I teach.

These are students who are educated through a school history curriculum that focuses almost entirely on English political and religious history – with bits of 20th-century European history thrown in. These are the bits with figures who can easily be cast as “evil” – Hitler or Stalin, for example. The students who I encounter know very little about Britain’s past, let alone Britain’s connections with the wider world or the history of the world outside Europe.

They therefore know practically nothing about empire and its legacies – including in Britain. The histories they have studied and texts they have read were virtually all about or by white men, so they also know nothing about the history of women or the histories of people of colour, either. This includes those who have played important roles in shaping Britain’s past.

Corbyn’s proposals would not only begin to redress the phenomenal gulf between academic history and the English school curriculum. They would also help students to see people of colour as historical agents. The proposals may also help to challenge the exclusivist and essentialist ways in which students are taught to view both Britain and the wider world.

These proposals, however, have been met with the type of outrage many have come to expect from white, middle-aged, right-wing conservatives. According to the “bullish” Brexiteer and Conservative MP Tom Loughton, Corbyn’s proposals demonstrated he was “ashamed” of his own country – and was more interested in “talking down” Britain rather than celebrating “the immense amount of good we have done in the world over many centuries”.

“Bad things”, according to Loughton, undoubtedly happened in the name of empire, but Britain should be proud of its many legacies – including its role in abolishing the global slave trade. Not to be outdone, the equally bullish Brexiteer Jacob Rees Mogg trotted out Britain’s abolition of the slave trade on Nick Ferrari’s LBC show. He also noted that while there were “blots” on Britain’s colonial history it had some “good bits” that were “really wonderful”.

Such responses demonstrate a profound ignorance about British imperial and colonial history, particularly about the impact of empire on not only the colonised but also the colonisers as well. But it is a state of denial about empire that makes views like those of Loughton and Rees Mogg possible. To say that empire had “good bits” is to deny what empire entailed – namely the conquest, subjugation and exploitation of millions of people.

It is to erase the tremendous structural and symbolic violence that empire unleashed. To praise Britain’s role in abolishing the slave trade is only possible if we deny the various forms of economic, political, social and cultural violence that enabled the perpetuation of such a trade – in Britain and its empire – as well as the ongoing legacies of such forms of violence. To view empire as having “good” and “bad” bits also entails viewing the past in simplistic terms. And to claim students should only study the “good bits” of the past also begs the question: whose “good bits”, exactly?

It also assumes that to teach schoolchildren the “bad” bits is to make them ashamed of their country’s past. Yet as Germany has demonstrated, teaching children to interrogate difficult histories does not make them hate their country. It can serve, instead, to promote an “anti-nationalist nationalism”, in which the very tenets of nationalist thinking – including viewing the past in nationalistic terms – are critiqued.

As my own students have told me, being able to interrogate difficult histories such as the history of empire, to explore the myriad connections between people in different parts of the planet, or to study the writings of Indian thinkers and actors has given them a much better understanding of themselves and their place in the world. Or, as one student put it, it has enabled them to “grow as a person”. And that, surely, is what education is supposed to do.