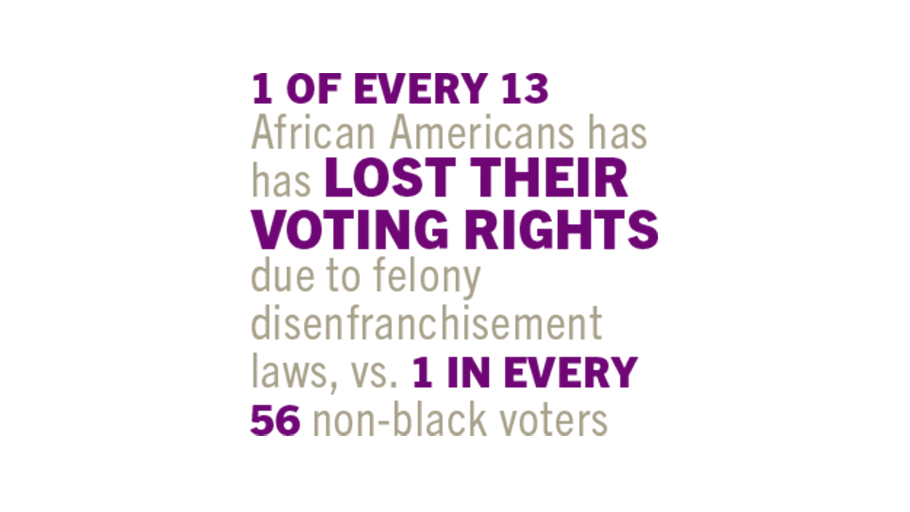 The Brutal Truth: The Felon Voting Ban is a Black Ban

You Are Here: Home » Blog » Editors' Choice » The Brutal Truth: The Felon Voting Ban is a Black Ban

During the 2004 presidential campaign then Democratic presidential candidate John Kerry mildly protested the towering hurdles to ex-felon voting in dozens of states. Kerry raised the issue for a good reason. He was trying to unseat Republican incumbent President George Bush. He remembered what happened with the last Democratic candidate, Al Gore, in the 2000 presidential contest. Gore disputedly and arguably lost Florida to Bush by a few hundred votes. That cost him the White House.

Those few hundred votes almost certainly could have been easily swamped by thousands of Democratic votes in the state. A big portion of those Democratic votes would have come from Black voters. But thousands of those black voters weren’t there because they were permanently banned from the polls. They were among the thousands of ex-felons that Florida bars from the polls for life. It makes no difference if the ex-felon is imprisoned for petty drug use or murder. If it’s a felony conviction they’re out. A handful can and do appeal to the Governor and do win their appeal to have the permanent ban lifted. However, the loops they must go through are tortuous, totally arbitrary, and humiliating. Nearly two decades later, Florida is back in the news again with a voter initiative, Voting Restoration Amendment, to lift the ex-felon voting lifetime ban.

It’s going to be tough sledding. The ban has nothing to do with protecting society, preserving order, or punishment. It has everything to do with politics and race. They can’t be separated. It’s no accident that the states that impose the medieval lifetime or close to lifetime bans on ex-felons, like Florida, are mostly Deep South states.

The bans are a naked, blatant, 21st Century update of the old Jim Crow disenfranchisement ploys the South has used for decades to dilute the Black vote. The arsenal of racially abusive tactics has included poll taxes, literacy laws and political gerrymandering to drive Blacks from the voting booths. The states are all GOP controlled. The resistance from the GOP governors and state legislatures to modifying, let alone scrapping the harsh bans, has been fierce.

This thinly disguised relic of the South’s Jim Crow past also has done much to drastically dilute black political strength. In the 2016 presidential election, if the 1 million black men in prison, on parole, or probation that were disenfranchised because of their criminal record had been added to the total their vote might have made a crucial difference in deciding the White House as well as close statewide contests. Black ex-felon disenfranchisement will probably get worse. Blacks still make up nearly half of the more than 2 million prisoners in the nation’s jails. The continued entrenchment of racially biased drug laws, racial profiling, and chronic poverty in many black communities means that more black men will be arrested, prosecuted, convicted and serve longer prison sentences than white men. This virtually guarantees that the number of blacks behind bars will swell. The Sentencing Project estimates that at the present rate of black incarceration upwards of 40 percent of black men could be permanently barred from the polls in the vote restricted states in the next few years. Many conservatives passionately defend the policy of ex-felon disenfranchisement. They claim that in barring criminals from voting society sends the strong message that if you break the law you should pay, and continue to pay dearly. The argument might make sense if all or most of the disenfranchised ex-felons were convicted murderers, rapists or robbers. And they were denied the vote because of a court-imposed sentence. This is not the case. None of the states that bar felons from voting in near perpetuity require that judges strip them of their voting rights as part of their sentence based on the seriousness of the crime or the severity of the punishment. The majority of ex-felons are jailed for non-violent crimes such as drug possession, passing bad checks, or auto theft. In most instances they fully served their sentence and in theory paid their debt to society. Most of the convicted felons were young men when they committed their crime. The odds are that most of them won’t become career criminals, but will hold steady jobs, raise families and become responsible members of the community. Yet imprinting these ex-felons with the legal and social stigma of “hereditary criminals” and banning them from voting until death makes politicians and many Americans seem like the worst kind of hypocrites when they say they believe in giving prisoners a second chance in life. Civil liberties groups and civil rights organizations must fight harder against the bans. That means filing court challenges and mounting a sustained lobbying campaign in Congress or state legislatures to get the discriminatory voting laws changed. The denial of voting rights to thousands of blacks, decades after the end of slavery and legal segregation is a travesty of justice, and a blot on the democratic process. If Florida GOP officials, as well as those in other states, and Trump have their way the travesty will continue.

Earl Ofari Hutchinson is an author and political analyst. He is the author of the forthcoming 50 Years Later: Why the Murder of Dr. King Still Hurts (Middle Passage Press). He is a weekly co-host of the Al Sharpton Show on Radio One. He is the host of the weekly Hutchinson Report on KPFK 90.7 FM Los Angeles and the Pacifica Network.