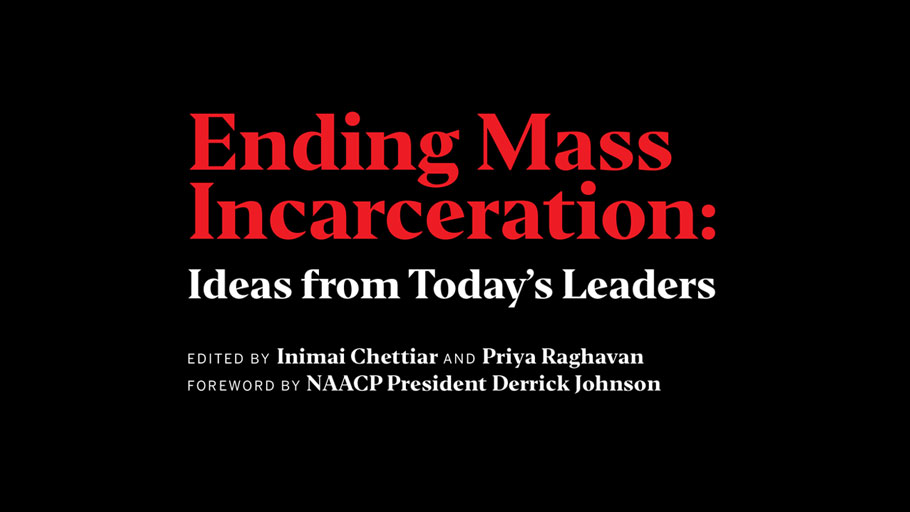 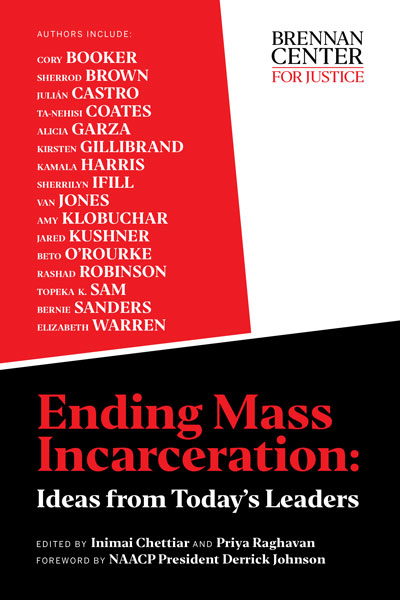 The American public has decisively concluded that our approach to criminal justice isn’t working.

Mass incarceration is the civil rights crisis of our time. The racial disparities pervasive in our justice system compound at every juncture: African Americans are more likely to be stopped by police, arrested, detained before trial, and given harsher sentences than whites. Worse, the disparities in our justice system perpetuate racial inequity in our society more broadly.

In this remarkable collaboration, the country’s most prominent lawmakers and activists join together to propose ideas for transformative change. In these essays, they lay out their proposals to reduce the prison population and challenge our very conception of justice reform, paving the way for far-reaching political and cultural change. Marking a clear shift from the draconian rhetoric of the past, these essays take on the web of harmful policies that fuel mass incarceration and diminish opportunities for communities of color.

How do we achieve change? From eliminating prison for lower-level crimes to incentivizing states to decarcerate, from ending money bail to abolishing private prisons, from reforming housing and employment laws to changing the public perception of the justice system and cultivating respect for all lives, the ideas in this book offer a path forward: one rooted in fairness, equality, and humanity. The second volume in the series, Ending Mass Incarceration: Ideas from Today’s Leaders aims to further the momentum needed to achieve that vision. It builds on the 2015 Brennan Center publication profiling the Voices of national leaders, Solutions: American Leaders Speak Out on Criminal Justice.

How can we end mass incarceration in America? By now, the debate is over: our nation grossly over-incarcerates its people. The United States has less than five percent of the world’s population and nearly one-quarter of its prisoners. Astonishingly, if the 2.3 million incarcerated Americans were a state, it would be more populous than 16 other states. All told, one in three people in the United States has some type of criminal record. No other industrialized country comes close. This system grew over decades in plain sight, and only a broad and bold national response will end it.

Mass incarceration has crushing consequences: racial, social, and economic. We spend around $270 billion per year on our criminal justice system. In California it costs more than $75,000 per year to house each prisoner — more than it would cost to send them to Harvard. Mass incarceration exacerbates poverty and inequality, serving as an economic ball and chain that holds back millions, making it harder to find a job, access public benefits, and reintegrate into the community.

Most disturbingly, the system profoundly discriminates against people of color at every juncture. African Americans are more likely to be stopped by police, arrested, detained before trial, and given harsher sentences than whites. As a result, they are imprisoned at more than five times the rate of whites. In some states, this disparity is more than ten to one. For too long, we have tolerated this civil rights crisis.

And mass incarceration simply is not necessary to keep our communities safe. Today, crime and murder rates remain near record lows nationwide. Our cities — many of which suffered under a wave of violent crime in the early 1990s — are largely safer than they have been in years. No one is entirely sure what caused the steady crime decline of the past two and a half decades. But it is clear that it owes little to harsh policies and the resulting increase in incarceration. In fact, 27 states have reduced both imprisonment and crime together from 2006 to 2014. It is increasingly clear that reform and safety go together.

For all these reasons, the politics of crime and punishment have changed fundamentally, in ways hard to imagine in an earlier era. Today, polls show widespread support for a less punitive approach. Once incendiary moves such as marijuana legalization or an end to the death penalty are finding political success and rising popularity. In red, blue, and purple states, lawmakers are beginning to respond and act.

At long last, a vibrant public conversation is underway. A 2015 Brennan Center publication, Solutions: American Leaders Speak Out on Criminal Justice, offered proposals from a bipartisan array of elected officials and advocates and helped move criminal justice reform to the center of the 2016 election. Since then, the nationwide consensus in favor of a new direction has only hardened. For the first time, the opportunity for truly transformative change is in view.

Last year, Congress took a step forward by overwhelmingly passing the bipartisan First Step Act. It shortened some of the most extreme federal drug sentences and expanded programming for incarcerated people. But in recent years, we’ve also seen the country’s leadership take grave steps back, from expanding immigration detention to reinstituting draconian federal charging policies. The First Step Act — which needs to be fully funded and implemented — will not fix our deeply broken system. But with both Democrats and Republicans committed to reform, it represents a new baseline. This breakthrough shows it is possible to make even bigger changes — and that the politics can align.

And federal policy matters. While the vast majority of the nation’s prison population is held in state facilities, what happens at the federal level sets the stage for the rest of the nation. Federal reforms can spur national culture change to end mass incarceration, and federal incentive funding can help states to decarcerate and provide support for innovative new ideas.

So, now, what’s the next step?

We need stronger, more comprehensive, and more far-reaching solutions from our nation’s leaders to address mass incarceration. It would be a missed opportunity to aim for anything less than fundamental change.

That’s why, in advance of the 2020 presidential election, we have again asked leaders representing communities most harmed by mass incarceration, as well as top policymakers, to offer their solutions. And we’ve urged them to think big. Each author has contributed an essay highlighting their own ideas for reform. Neither the Brennan Center nor I agree with all the content of the essays in this book, and each author would likely say the same. The Center sought to create a nonpartisan forum for sorely needed ideas to be publicly shared.

Over the past few years, the Brennan Center has outlined some key steps toward ending mass incarceration in the United States. To start, if the federal government and every state ended imprisonment for lower-level crimes and reduced overly long sentences for other crimes, we could safely cut the nation’s prison population by 40 percent. Second, if Congress passed a “reverse” of the 1994 Crime Bill to incentivize states through federal grants to decarcerate rather than incarcerate, it could spur nationwide change. Finally, federal lawmakers could transform how prosecutors operate by rewarding U.S. Attorneys’ offices that reduce incarceration and recidivism in their districts. These policies would bring down the federal prison population while encouraging states to do the same.

Reform, of course, goes beyond criminal law and the justice system itself. Unwinding the system of mass incarceration requires a new focus on spurring economic growth in low-income communities, addressing systemic racism, building a better system to address mental health, and more. In the essays that follow, authors lay out thoughtful paths for holistic reform.

Mass incarceration grew over decades. It may seem a permanent fact. But public awareness, public anger, and public commitment have begun to change that. All of us must ensure that we do not subject another generation of young people of color to a destructive cycle of incarceration and poverty. We need solutions as far-reaching as the problem they address. Only then can we build a more equal, more democratic, and more united America. Few tasks could be more urgent.

Originally posted by The Brennan Center for Justice –  brennancenter.org , May 16, 2019