You Are Here: Home » Editors' Choice » Ilhan Omar is Fighting for the White Working Class-Even as They Chant ‘Send Her Back’ 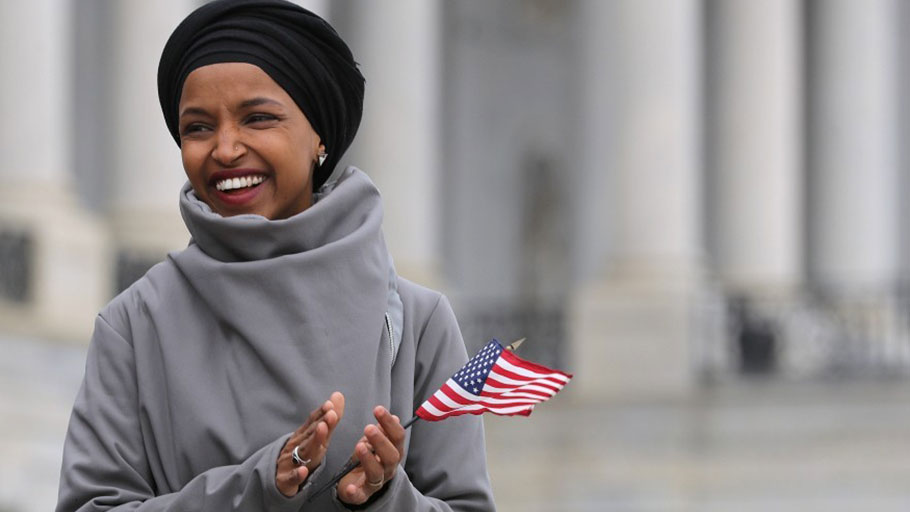 Over the last month I have watched in awe as Rep. Ilhan Omar has responded to hate with not just grace, but policy.

As a Muslim American woman myself, it’s hard to imagine being in her position, with the president of the United States leading a mob chanting “send her back.” Yet Omar is continuing not only to do her job but to overperform at it— including on behalf of the very working white people Trump himself claims to represent.

Let’s take a look at Omar’s work in just the last few months.

In May, the congresswoman introduced the Frank Adelmann Manufactured Housing Community Sustainability Act, a bill to stop people from being evicted from their mobile homes. One in 10 people under the poverty line in the U.S. lives in a mobile home, and the median income of mobile home residents is 43 percent lower than other households.

In June, Omar introduced the No Shame at School Act, which would make school lunches more affordable and stop efforts to shame kids whose families can’t afford their food, like publicly naming kids behind on payments or making them wear wristbands. Data from the National School Lunch Program shows that white students are just as likely as any other group to receive reduced-price meals.

She’s also advocated for Medicare for All, canceling student debt, and raising the minimum wage, and called for an investigation into Amazon’s workplace abuses.

Across the board, Omar has been a stalwart champion of policies to improve life for the working classes, including the white working class often considered Trump’s base — and, perhaps, a few of those folks who were chanting for her removal.

There’s no denying that this is all quite remarkable. But it’s mostly my white, non-Muslim friends who can’t wrap their head around how, still, she carries on in full force.

I’d direct them to a Buzzfeed essay by poet Tiana Clark, who talks about how black millennials — and black women in particular — experience burnout differently. Perhaps “white upper-middle-class millennials aren’t accustomed to being tired all the time,” she muses. But women of color learn to move forward with their plans and deal with the mental and physical effects of daily oppressions later.-

I’m not black. But as a Muslim, Arab American, woman I can understand that beleaguered drive to carry on.

Like racism, Islamophobia doesn’t allow much room for burnout to take over. If my productivity ground to a halt every time I felt othered by an angry stare, a Facebook comment, or even a new federal policy, I’d never accomplish a single thing. And the daily aggressions multiply exponentially for a public, active, black refugee Muslim woman like Omar.

So, we carry on because the only other option is to be what they want us to be: silent and complicit in the face of injustice—and my reading of the Quran tells me that’s really not an option.

At a recent congressional hearing on poverty, Omar rebuked her fellow lawmakers for resisting policies to provide health care, housing, childcare, and more to the 140 million poor or low-income people in the United States. Providing these basic human rights is “the Godly thing to do,” she said at the hearing.

Would Trump supporters prefer the guy who tried to kick 26 million Americans off their health insurance, gave a $2 trillion tax break to his rich friends, and just released a plan to throw 55,000 children in subsidized housing out of their homes?

Maybe—but only if demagogues like Trump deceive them that people who look like Ilhan, or me, are the real threat.

Racist chants, Islamophobic rhetoric, false charges of anti-Semitism, and even death threats aren’t going to stop Omar from fighting for all of our rights. She takes her lead from a religion with a Prophet who was known for his forgiveness, pardoning people who assaulted him and even those who killed members of his family.

So when I see Omar return to her home state to a cheering crowd, and fit in a game of soccer with the local kids, I remember that her signature policies are backed by the majority of Americans. The nausea in my stomach that was formed from “send her back” chants starts to dissipate, and I get back into the fight more determined than before to pursue a world that doesn’t leave us both so tired all of the time.

Domenica Ghanem is the media manager at the Institute for Policy Studies.

Alarm over voter purges as 17m Americans removed from rolls in two years
We Need Your Support — Donate, Share, Sign-Up Ways to Support