You Are Here: Home » News & Current Affairs » Alarm over voter purges as 17m Americans removed from rolls in two years 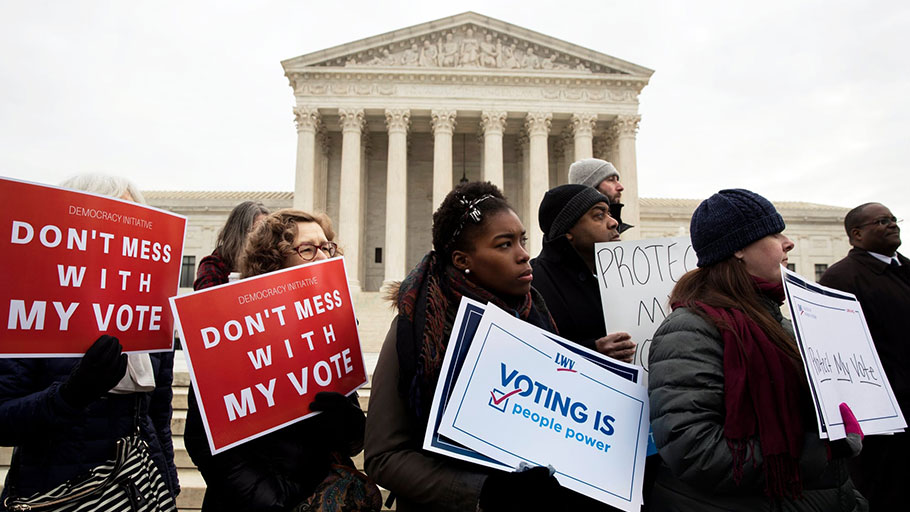 The disproportionate purging of voters has resulted in an estimated 1.1 million fewer voters between 2016 and 2018, the Brennan Center said. Photograph: Michael Reynolds/EPA

By Tom McCarthy, The Guardian —

US election jurisdictions with histories of egregious voter discrimination have been purging voter rolls at a rate 40% beyond the national average, according to a watchdog report released on Thursday.

At least 17 million voters were purged nationwide between 2016 and 2018, according to a study by the Brennan Center for Justice. The number was basically unchanged from the previous two-year period.

While the rate of voter purges elsewhere has declined slowly, jurisdictions released from federal oversight by a watershed 2013 supreme court ruling had purge rates “significantly higher” than jurisdictions not previously subjected to oversight, the Brennan Center found in a previous report.

That trend has continued, the watchdog said, with the disproportionate purging of voters resulting in an estimated 1.1 million fewer voters between 2016 and 2018.

Voter purges accelerated in the United States with the 2013 Shelby County v Holder ruling, which released counties with histories of voter discrimination from federal oversight imposed by the 1965 Voting Rights Act.

The Voting Rights Act barred jurisdictions with “evidence of actual voting discrimination” – for example, registration tests and a voter rate at least 12% below the national average – from changing their voting procedures without “pre-clearance” from federal authorities.

In Shelby county, the supreme court declared that “nearly 50 years later, things have changed dramatically” and released the so-called section 5 jurisdictions from oversight. Chief justice John Roberts wrote that “the tests and devices that blocked ballot access have been forbidden nationwide for over 40 years”.

A federal court for North Dakota on Wednesday upheld a law requiring voters to have a residential street address, rejecting a complaint by a Native American group that the law amounted to voter suppression, because many of its members had no such address.

Voter roll purges are regularly undertaken to account for voters who move or die. But critics say that aggressive and unfair purges of voter rolls in recent years – such as a purge of 107,000 voters in Georgia in 2017 by the then secretary of state, Brian Kemp, who was subsequently elected governor by the electorate he had culled – have warped democracy.

“As the country prepares for the 2020 election, election administrators should take steps to ensure that every eligible American can cast a ballot next November,” the Brennan Center said in a statement. “Election day is often too late to discover that a person has been wrongfully purged.”

Historic Memorandum of Understanding signed between The University of the West Indies and the University of Glasgow
We Need Your Support — Donate, Share, Sign-Up Ways to Support