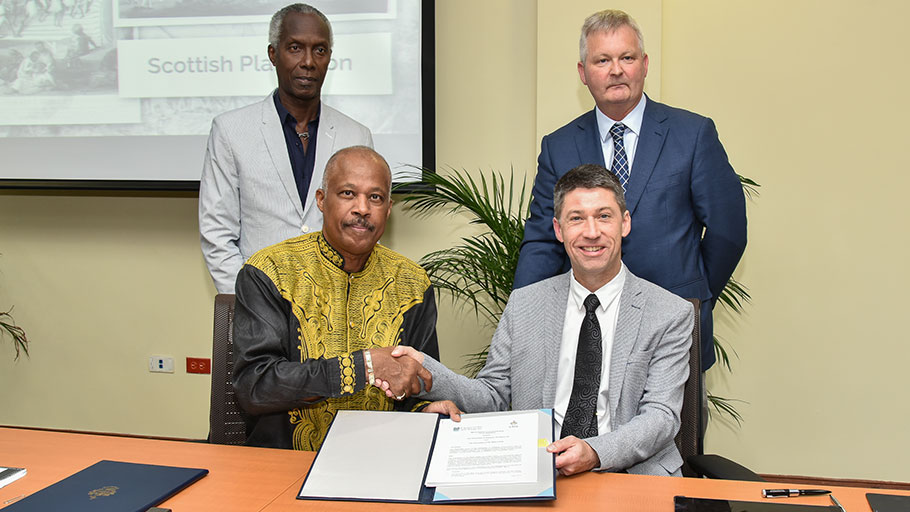 Professor Sir Hilary Beckles (seated left), Vice-Chancellor of The University of the West Indies (The UWI) and Dr. David Duncan, Chief Operating Officer & University Secretary, University of Glasgow, shake hands following the signing of the Memorandum of Understanding at The UWI Regional Headquarters, Kingston, Jamaica on July 31, 2019, to partner in a reparations strategy including the establishment of the Glasgow-Caribbean Centre for Development Research. Witnessing the event are C. William Iton (left), University Registrar, The UWI and Peter Aitchison, Director of Communications & Public Affairs, University of Glasgow.

The document, framed as a “Reparatory Justice” initiative, acknowledges that while the University of Glasgow lent support to efforts to abolish the trade in enslaved Africans and to end slavery, it also received significant financial support from people whose wealth was derived from African enslavement. The evidence of this history of financial benefitting from enslavement, particularly in the Caribbean context, was presented by a research team commissioned by the University’s Vice-Chancellor, Professor Sir Anton Muscatelli.

The two universities have agreed to partner in a reparations strategy that focuses on how best to use this historical knowledge in order to fashion reparatory justice tools and research for Caribbean development. Acknowledging that universities have a duty to be at once excellent and ethical, the MoU will enable the University of Glasgow to make specific and general contributions to Caribbean problem-solving development.

Under the terms of the MoU the two universities agreed to establish the Glasgow-Caribbean Centre for Development Research. The Centre, through reparatory-oriented policy research, will address the legacies of slavery and colonialism, such as persistent poverty and extreme inequality in economic relations, chronic disease proliferation, educational inadequacies, and related inhibiting factors adversely impacting economic growth and social justice in the region.

Over the next two decades, UoG commits to spending £20 million as part of its program of reparative justice, including seed funding, benefactions and research grant income raised from grant-giving bodies. UoG will allocate resources to support the running of the Centre, scholarships, research, public engagement, and related initiatives. UoG and The UWI will work together to attract external funding for mutually agreed projects that will benefit the communities of the Caribbean islands and other parts of the world affected by the slave trade.

Speaking at the signing ceremony, Professor Sir Hilary Beckles commented that he “was proud of the decision of the University of Glasgow to take this bold, moral, historic step in recognizing the slavery aspect of its past and to rise as an advocate of reparatory justice, and an example of 21st century university enlightenment.” Shortly after he became Vice-Chancellor, Sir Hilary received an Honorary Doctor of Letters from the University of Glasgow for his work as a historian and was invited to advise the university on how best to address its historical links to slavery.

Another commemorative signing of the MoU is scheduled at the University of Glasgow on August 23, 2019, coinciding with UNESCO’s International Day of Remembrance of the Slave Trade. It will include the unveiling of a commemorative plaque in honor of the enslaved.

About the University of Glasgow

Founded in 1451, the University of Glasgow is the fourth oldest university in the English-speaking world, delivering world-class, world-changing research and education with impact. A member of the prestigious Russell Group of leading UK Universities, Glasgow is ranked 67th in the world (QS World University Rankings 2020) and joint 93rd in the world by the Times Higher Education World University Rankings 2019. We welcome students from more than 140 countries worldwide and have around 28,000 undergraduate and postgraduate students. For more, visit www.glasgow.ac.uk

For over 70 years The University of the West Indies (The UWI) has provided service and leadership to the Caribbean region and wider world. The UWI has evolved from a university college of London in Jamaica with 33 medical students in 1948 to an internationally respected, regional university with near 50,000 students and four campuses: Mona in Jamaica, St. Augustine in Trinidad and Tobago, Cave Hill in Barbados, and an Open Campus. As part of its robust globalization agenda, The UWI has established partnering centres with universities in North America, Latin America, Asia, and Africa including the State University of New York (SUNY)-UWI Center for Leadership and Sustainable Development; the Canada-Caribbean Studies Institute with Brock University; the Strategic Alliance for Hemispheric Development with Universidad de los Andes (UNIANDES); the UWI-China Institute of Information Technology, the University of Lagos (UNILAG)-UWI Institute of African and Diaspora Studies and the Institute for Global African Affairs with the University of Johannesburg (UJ). The UWI offers over 800 certificate, diploma, undergraduate and postgraduate degree options in Food & Agriculture, Engineering, Humanities & Education, Law, Medical Sciences, Science & Technology, Social Sciences, and Sport.

As the region’s premier research academy, The UWI’s foremost objective is driving the growth and development of the regional economy. Times Higher Education ranked The UWI among the top 1,258 universities in the world for 2019, and the 40 best universities in its Latin America Rankings for 2018. The UWI was the only Caribbean-based university to make the prestigious lists.

For more, visit www.uwi.edu. (Please note that the proper name of the university is The University of the West Indies, inclusive of the “The”, hence The UWI.)

Long Before Trump’s Tweets, Baltimore Had Become a ‘Target.’ Here’s How Segregation Helped Create Its Problems

Long Before Trump’s Tweets, Baltimore Had Become a ‘Target.’ Here’s How Segregation Helped Create Its Problems
We Need Your Support — Donate, Share, Sign-Up Ways to Support