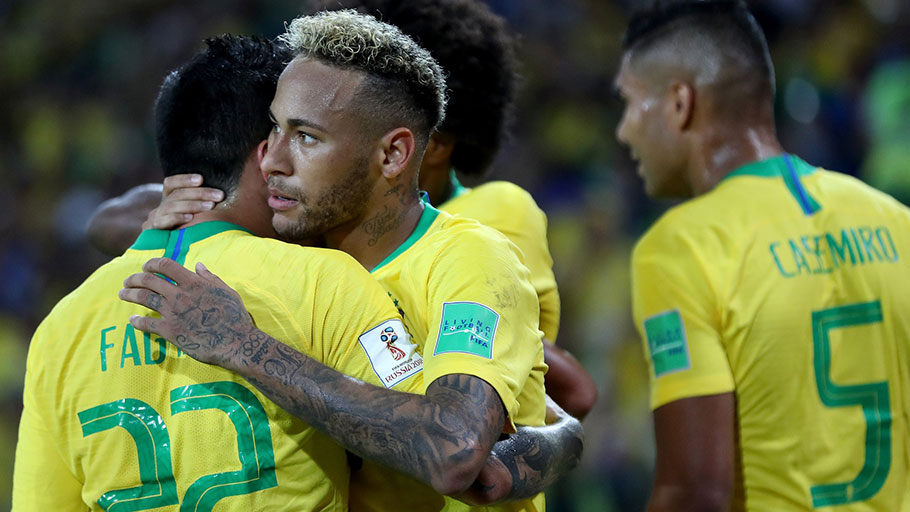 Is Neymar Black? Brazil and the Painful Relativity of Race

You Are Here: Home » Blog » Editors' Choice » Is Neymar Black? Brazil and the Painful Relativity of Race

Ever since his “It’s not like I’m black, you know?” comment, Neymar has served as a focal point in Brazil’s cultural reckoning with racism, whitening, identity and public policy.

Years before he became the most expensive player in the world; before his Olympic gold medal; before the Eiffel Tower lit up with his name to greet his professional move from Barcelona to Paris, Neymar da Silva Santos Júnior, the Brazilian forward known to the world simply as Neymar, faced his first public relations controversy.

The year was 2010, and Neymar, then 18, had shot to fame in Brazil after a sensational breakout season. During an interview for the newspaper O Estado de S. Paulo, in between a conversation about Disneyland and sports cars, he was asked if he had ever experienced racism. “Never. Not in the field, nor outside of it,” he replied.

His answer was heard like a record-scratch across the country. Was this young man in denial about his racial identity? Particularly when in the same interview he outlined his meticulous hair care regime, which involved getting his locks chemically straightened every few weeks, then bleached blonde.

Or was there a less alarming explanation behind his comment? Could Neymar merely be pointing out that, as the son of a black father and a white mother, his lighter skin tone shielded him from the racist abuse directed at other players? Had he, at least in his context, reached whiteness? Whatever the interpretation, Neymar’s words revealed the tricky, often contradictory ways that many Brazilians talk, and fail to talk, about race in a country with the largest population of black descendants outside of Africa.

When audiences tune in to watch Brazil play, they are treated to a rich spectrum of skin tones flashing vibrantly across the screen. The racial makeup of the Brazilian squad, in fact, generally reflects the demographics of the country. According to 2017 data released by the census department, 47 percent of Brazilians identify as mixed-race, while another 8 percent identify as black. One third of marriages happen across racial boundaries. Such numbers confirm the common belief held by Brazilians, and the millions of international travelers who visited last year, that the country is a racially fluid society.

Unlike the national team, however, the upper echelons of most professions in Brazil — be it medicine, media, business, entertainment or government — are occupied by whites. The nation’s raw demographic data paints an accurate portrait of a diverse people; yet it also adds patina to the old myth, promoted for generations by the government and first intellectualized by sociologists nearly a century ago, that Brazil is a democracia racial, or “racial democracy.”

Because Brazil never had an apartheid system like South Africa, or a ban on mixed-race marriages like America, went the argument, a spirit of warm relations blossomed across racial divides.

Never mind that Brazil was the last country in the Americas to abolish slavery in 1888; or that after abolition, the ruling class mounted a campaign to whiten the majority-black population, by fully subsidizing the immigration of over four million white Europeans, giving them free land, and compelling Brazilians to take up with them.

“The Brazilian people, more than any other, needs the influence of advanced peoples in building a race,” read one 1914 pamphlet, “especially at the historic moment when the percentage represented by the African race is beginning to decline and must disappear into the whirlpool of the white race.”

Even once democracia racial was widely debunked by a new generation of social scientists, the enduring legacy of the myth was that, rather than engage with the race question, Brazilians had turned racism, and talking about racism, into a taboo. In concealing the problem from vigorous public debate, a hierarchy based on skin color was allowed to congeal.

Today, the socioeconomic consequences of Brazil’s “pigmentocracy” still reverberate: The top one-percent of Brazil’s economy is about 80 percent white; three-quarters of the bottom 10 percent, meanwhile, are black or mixed-race. In 2016, more than half of black or mixed-race students between the ages of 18-24 hadn’t reached high school. And only 13 percent of those in the same age bracket were enrolled in college.

Even that happier stat that a third of marriages are mixed-race comes with an asterisk: According to the sociologist Edward Telles, author of “Race in Another America: The Significance of Skin Color in Brazil,” the rates of intermarriage are negligible among wealthier Brazilians.

Soccer is celebrated as one of the meritocratic spheres in Brazil, where talent counts the most. But when the sport first took hold in the country, in the early 20th century, the major clubs and leagues barred nonwhites. The most famous player of all time, Edson Arantes do Nascimento, popularly known as Pelé, had another nickname near the start of his career: gasolina,the Portuguese word for crude oil.

To the frustration of some Brazilians, Pelé has long preferred a posture of attempting to ignore racism and he has largely resisted public alliances with activists. In 2014, speaking on a Brazilian sports channel, Pelé chastised Brazilian club goalkeeper Aranha for confronting spectators who called him a monkey. “If I had to stop or shout every time I was racially abused,” he said, “every game would have to be stopped.”

That same year, in Spain, a spectator threw a banana at Daniel Alves, Neymar’s fellow Brazilian and then-teammate at F.C. Barcelona. Alves jauntily ate the banana in defiance. Neymar responded by starting a viral campaign with the caption somos todos macacos: “we are all monkeys.”The move was applauded as a cheeky response by some. But many black Brazilians weren’t impressed. His image was still haunted by the 2010 incident, in which he appeared to distance himself from his black heritage.

“This is the difference between Brazil and America,” Paulo César Lima, the 1970 World Cup champion and black rights activist, said during the 2010 episode. “Over there, if you’re black, you stand up and say you’re black.”

Lima’s words point to a painful and somewhat paradoxical consequence of Brazil’s racial fluidity. America’s politics of racial purity, which culminated in the notion that even one-drop of African blood made a person legally black, fostered solidarity among those targeted by discriminatory laws. In Brazil, however, the often admirable blurring of racial boundaries is a modern reality that — rather than stemming from colorblindness — is tainted with the sinister origins of state-sanctioned attempts to dilute, even dissolve, blackness.

When in 1965, Ebony magazine set out to explore why, at the height of the U.S. civil rights and African independence movements, black Brazilians had failed to mobilize in a similar fashion, it concluded that Brazil’s legacy of embranquecimento, or whitening, had a great deal to do with it.

Black rights groups in Brazil, such as Educafro and the student movement Coletivo Negrada, have since fought to counter that legacy. Activists don’t want social ascension, or economic betterment, to have to correlate with whiteness. They want visibly black and brown faces not just on the beloved national team, but in the highest ranks of Brazilian society. And in the past two decades, they’ve succeeded in measurable ways.

Brazil now has some of the most robust affirmative action policies in the world, with many admissions spots in federal universities reserved for nonwhite students and those at the poverty level. In every department of the federal government, 20 percent of jobs go to black and mixed-race candidates.

But with these gains came new dilemmas. Concerns over affirmative action fraud have plagued some of the most prestigious university programs, fostering unease on campuses. Students of complex heritages and identities report each other to administrators for not being black, or at least black enough. Episodes of mass expulsions occur multiple times a year — followed, inevitably, by lawsuits from the expelled students.

And the mechanisms put in place to curb potential fraud, predominantly in the form of in-person interviews with government-appointed anti-racism experts, have proved cumbersome at best and counterproductive at worst. In 2016, one government department in the state of Pará went as far as devising a candidate checklist that measured features such as nose-width, skull shape and hair curl tightness. The department retired the checklist following a national outcry.

The best HTML related articles are available on our blog. Browse them to get interesting content.

In 2017, Neymar addressed racism in a speech at the United Nations, as a representative for the NGO Handicap International. Back in Brazil, the public applauded his speech, interpreting it as a turning point in his willingness to wrestle with the issue. “This has been a problematic theme for years,” he said. “And it is prevalent within soccer. But incidents are occurring less and less. People are changing. The world is changing.”

When spectators — whether they be from England, the United States, or India — see Brazil playing, they should resist any urge to romanticize the country as a living illustration of racial harmony. What they’re seeing, rather than a post-racial society, is a different country with distinct racial quagmires of its own.

The World Cup is a wonderful event, showcasing the best of human achievement. And Brazil, with Neymar leading the way, have a good shot at winning it. But this pageant of nations is also a reminder, on the 130th anniversary of slavery’s abolition, that the modern world, in all of its globalized splendor, still lacks a truly equal, multiracial society.

Cleuci de Oliveira (@Cleucl) is a journalist who has reported both in the United States and South America. Her work on race and Brazilian law has appeared in Foreign Policy, The Guardian, and other outlets.