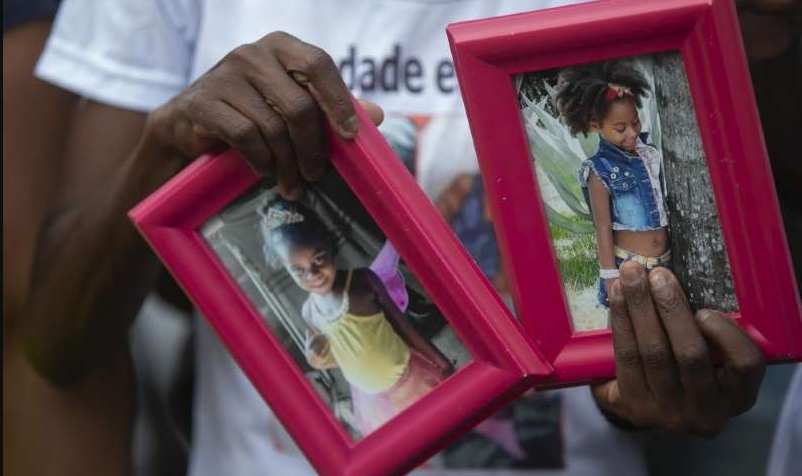 The shooting of two young black girls – who had between them enjoyed fewer than 11 years of life – has sparked outrage in Brazil and intensified the debate over police violence and structural racism in a country still grappling with the legacy of slavery.

Witnesses claimed they had seen a police officer shoot into the community at about 8.30pm that night, although Rio’s military police has denied its agents opened fire.

“It’s because they’re cowards,” the victim’s uncle, André da Silva Moreira, fumed as he and his sister relived the crime on Monday morning in a plaza near their home in the city of Duque de Caxias. 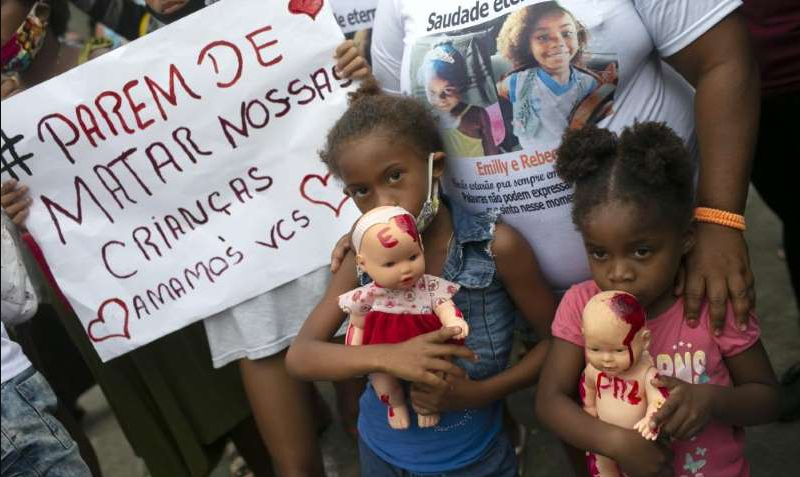 Children holding dolls covered with fake blood stand next to a sign that reads in Portuguese ‘Stop killing our children’. Photograph: Bruna Prado/AP

“And because we’re black too,” Ana Lúcia, a 38-year-old street hawker, cut in.

“You know what rights we have in this country?” asked André, 45. “The right to become a slab of meat in the hands of our governors.” The shootings, part of a remorseless wave of infant deaths in a city awash with high-calibre rifles, sparked an immediate outcry.

Former president Dilma Rousseff slammed the “veritable carnage” being unleashed on Rio’s poorest communities by the police’s “utter lack of control”. The black philosopher Djamila Ribeiro declared: “This is a genocidal country.”

One of the most moving protests came from Thiago Amparo, a black public intellectual. “There comes a point where tears can no longer express our pain,” he wrote in the Folha de São Paulo, demanding: “Who will answer for the genocide that is under way?”

Rio’s acting governor, Cláudio Castro, promised a “rigorous” inquiry into the deaths and said he favoured a security policy that was based on intelligence and sought to protect lives.

Cecília Olliveira, a public security specialist and journalist, said the killings captured perfectly the futility and racial bias of Brazil’s unceasing “war on drugs” which claims thousands of mostly black lives each year.

“What happened to these two children, in a predominantly black and poor neighbourhood far from the centre of Rio, is the synthesis of what Brazil chose as its public security policy: the extermination of invisible and quote-unquote ‘undesirable’ people,” Olliveira said. 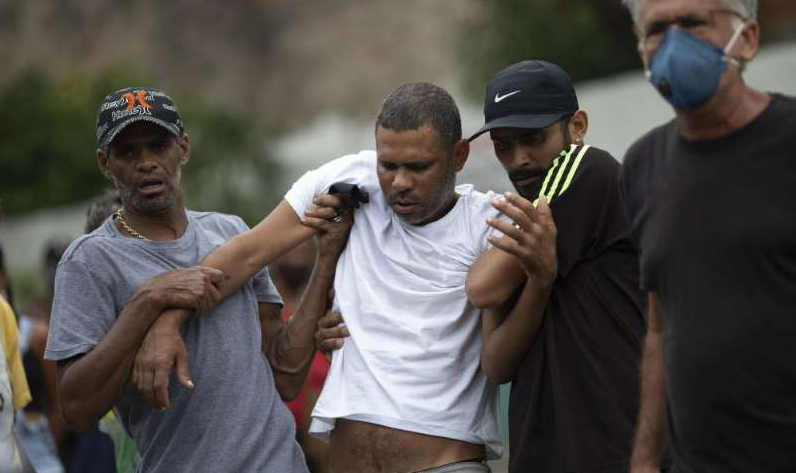 Fifty-six per cent of Brazil’s 211 million citizens identify as black or brown but last year nearly 80% of those killed by police and 75% of murder victims were black.

One of the most recent victims was João Alberto Silveira Freitas, a 40-year-old father-of-four who was beaten to death by security guards outside a Carrefour supermarket in Porto Alegre on the eve of Brazil’s black awareness day. That horrific attack, which was caught on camera, sparked street protests in several major cities and was compared to the killing of George Floyd in the US.

Flávia Oliveira, a prominent black broadcaster, called such killings part of “the toxic legacy of slavery” in a country that was the last western nation to abolish the practice, in May 1888.

Brazil’s failure to offer education, land or compensation to hundreds of thousands of newly emancipated slaves meant that more than 130 years later profound inequalities persisted, with black Brazilians earning less, living worse and being killed more often than their white counterparts. “Brazil remains a country that is built on the privileges of white people,” Oliveira said.

Olliveira, the security specialist, said she had no doubt about the racial dimension to the slayings of João Alberto, Emily and Rebeca.

“What these cases tell us, in such brazen, crystal-clear terms, is that black lives do not matter in Brazil,” Olliveira said, spurning recent claims from the country’s vice-president, Hamilton Mourão, that racism did not exist.

Relatives of Emily and Victoria also scoffed at Mourão’s remarks as they gathered to demand justice for the girls, who were shot in the head and chest and whose final moments are too horrifying to describe. 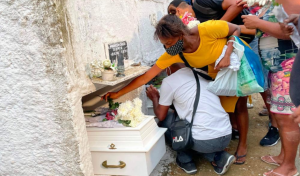 “She was going to turn five on 23 December,” Ana Lúcia Silva Moreira said of her daughter, recalling how she had bought Emily a Moana Disney princess costume for the party they had planned. Instead, she was buried in it on Saturday afternoon in a tatty concrete grave.

Rebeca’s grandmother, Lídia da Silva Moreira Santos, said she had just returned home from a 12-hour shift at the hospital where she cleans a Covid-19 ward when she heard gunfire she was adamant came from police.

“She was my only granddaughter … my flesh and blood – and they took her from me in the most ridiculous, cruel and brutish way possible. They didn’t have the right to do that,” the 51-year-old said. “It’s insane – just insane.”

The two girls smiled out from Santos’s white T-shirt, printed in memory of youngsters she considered her “princesses”. “Emily and Rebeca,” read the tribute below, “Words cannot express the sadness I feel right now.”