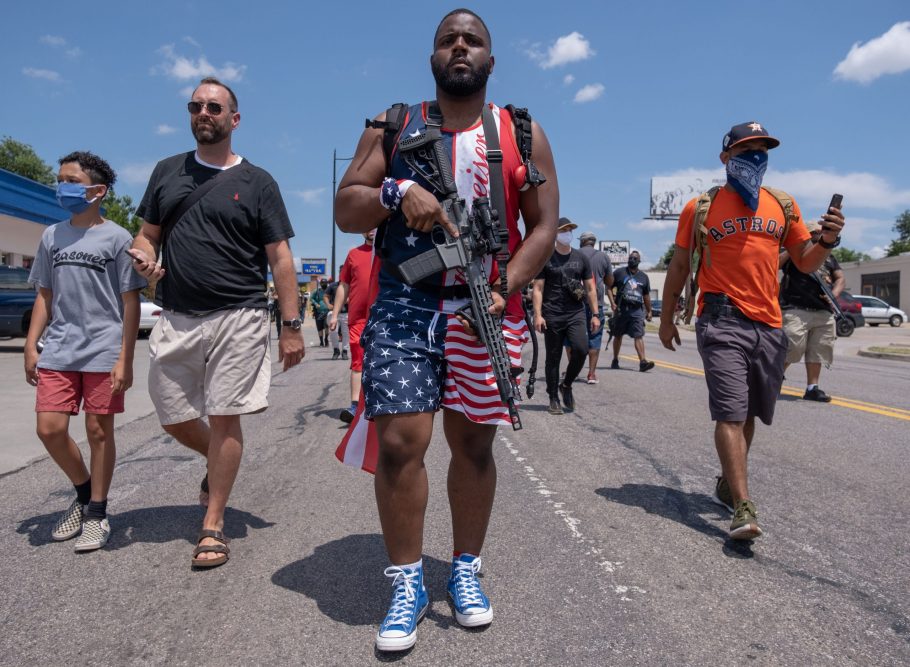 Racial Tensions in the U.S. Are Helping to Fuel a Rise in Black Gun Ownership

You Are Here: Home » Blog » Editors' Choice » Racial Tensions in the U.S. Are Helping to Fuel a Rise in Black Gun Ownership

Luther Thompson never thought he’d be a gun owner. But in April, the 41-year-old obtained a concealed carry license and bought his first firearm—a $400 Smith & Wesson pistol—after feeling, for the first time, that he was not safe raising a family in the South as a Black man.

“Down here, it’s totally different,” he says. “They’re bold with their racism.”

The purchase came two months after a white father and son fatally shot Ahmaud Arbery while the 25-year-old Black man was jogging. The killing stunned Thompson, a father of five, who lives in Cartersville, Ga., about 300 miles away from where Arbery was gunned down. “I never visualized that it would be this way,” he says.

Thompson’s concerns have only grown since the election, as President Donald Trump refuses to concede and as his supporters grow angrier over what they falsely believe was a stolen election. On Saturday, thousands of Trump voters protested the election results at a rally in Washington, D.C., where violent clashes with counter-protesters erupted into the night. On Monday, the FBI reported the highest number hate crimes in the U.S. in a decade in 2019, with Black people the most numerous targets of racially-motivated bias crimes.

“It makes you feel on higher alert,” Thompson says. “I have to be able to protect my family.”

Amid a record-breaking number of firearm sales, Thompson is among the nearly 6.9 million people in the U.S. who became first-time gun owners this year, according to estimates by the National Shooting Sports Foundation. The gun trade group said gun buyers were nearly 56% white males during the first six months of 2020, citing an industry survey of 104 retailers, which tracks with other national demographic surveys done on gun ownership trends. But there was a 58% jump in firearm purchases—the highest overall sales increase—among Black men and women, compared with the same period last year. The survey said 9% of new gun buyers were Black males and 5% were Black females.

So far in 2020, the FBI has conducted more firearm background checks than any year on record—about 16.5 million as of October, according to the agency’s latest figures. In October alone, there were an estimated 1.9 million firearm sales, a 65% jump from October 2019, according to Small Arms Analytics & Forecasting. Record sales have sparked ammunition shortages across the country. 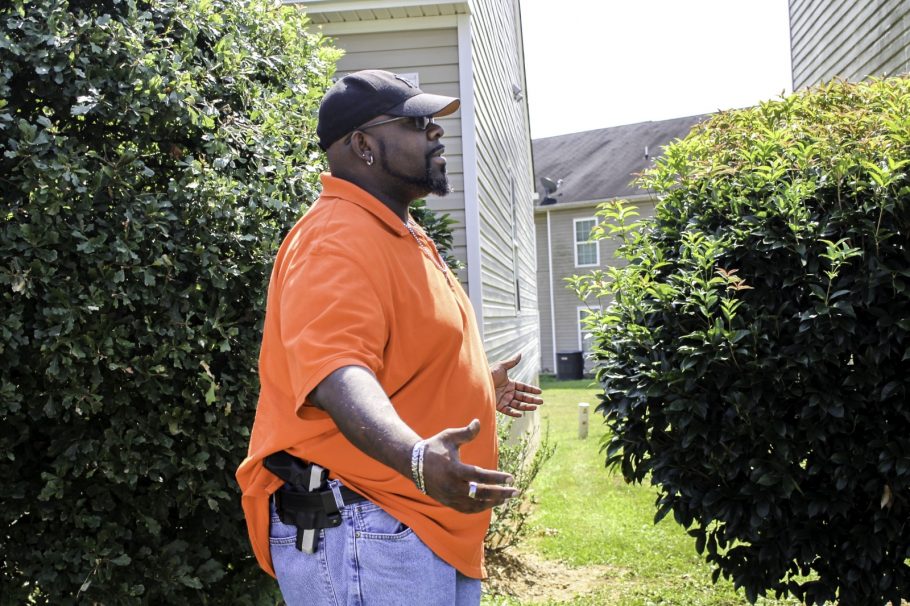 Luther Thompson, 41, poses with his firearm outside his Cartersville, Ga. home

Fear of the unknown has been a huge motivating factor. Retailers saw a growth in gun sales in March when the pandemic forced cities to shut down. Civil unrest and calls to defund the police following George Floyd’s death in May—coupled with tensions surrounding the presidential election—sustained the uptick.

“It’s been chaos outside,” says Maj Toure, who created the advocacy group Black Guns Matter in 2016 to encourage more Black people to educate themselves about guns and arm themselves for self-defense. “Black people are at the epicenter of all that.”

Gun ownership is most common among white men, particularly those who live in rural areas and those who describe themselves as conservative, according to the Pew Research Center and other surveys. According to a 2015 report by the non-partisan research group NORC at the University of Chicago, 39% of white adults said they lived in a household with a firearm while 18% of Black adults did. But Thompson says Black Americans in 2020 are being driven to gun shops for different reasons than white Americans—most of whom buy guns for more than one purpose, including for protection but also for hunting and sport shooting, according to the Pew survey. “How many white men are going to have guns pulled on them while they’re jogging?” Thompson says. “It’s a world of difference.”

Philip Smith, president of the National African American Gun Association, agrees. Shortly after Floyd’s death, about 3,800 new members joined the group, which already has about 35,000 active members, Smith says. His association has seen a 15% increase in membership since the same time last year, with an average of 1,000 new members joining each month. Smith says about 80% of its new members this year are first-time gun owners. “We’ve never had enrollment like that,” he says, adding that social unrest pushed people to the tipping point and is likely to continue doing so.

“Although the election is over, there’s still a lot of tension out there,” Smith says. “You can almost taste it out there, the friction.”

Like many of these new gun-owners, he worries about possible backlash from white supremacy groups who have been emboldened by Trump, who refused to directly disavow white supremacists and militia groups during the first presidential debate on Sept. 29. Instead, Trump told them to “stand back and stand by,” before shifting the conversation to issues surrounding far-left groups.

“One of the people that they use as a representative of their hopes and their aspirations is going to be taken down politically, and they’re angry about that,” Smith says. “We’re keeping our head on a swivel.”

Apart from election-related reasons, the booming gun business may grow even more in November and December, which are generally the biggest months for gun sales due to the holidays and hunting season. “We could see very well north of 20 million background checks before 2020 closes,” Oliva says. 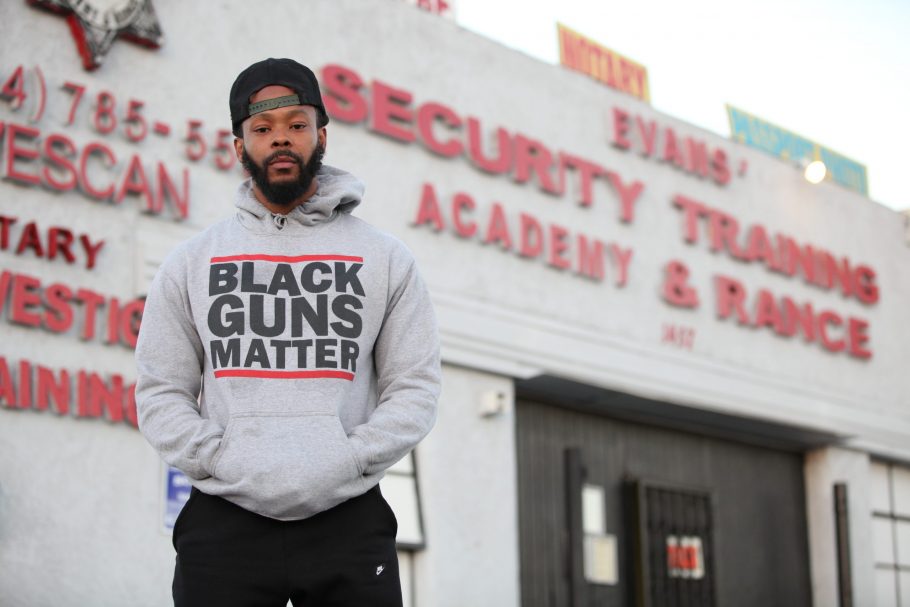 Gun-control advocates hope that’s not true, saying firearms largely cause more harm than good, despite so many people purchasing them for self-protection. “The irony of the whole thing is that the second you buy a gun, you are less safe,” says Robyn Thomas, executive director of the Giffords Law Center to Prevent Gun Violence.

There have been more than 36,800 gun deaths and about 33,500 gun injuries in the U.S. so far in 2020, compared to about 33,500 deaths and roughly 25,300 injuries during the same time last year, according to the Gun Violence Archive, which uses police and news reports and other government sources to tally daily gun-violence incidents.

According to Thomas, people are three times more likely to die by suicide and twice as likely to die by homicide when there’s a firearm in the home. She worries the gun industry is stoking public fear to sell more guns. “They’re saying you should be afraid of the world and buying this is going to make you safer, which is actually proven statistically untrue,” she says. “But people are not acting rationally right now. They’re acting emotionally.”

Meanwhile, gun violence is surging in major cities, even as overall violent crime falls. In New York City, shootings have spiked about 94% year-to-date, according to the city’s latest crime data, while rapes, robberies and felony assaults decreased. In Los Angeles, the number of shooting victims climbed 30% so far this year compared to the same time period last year, as total violent crimes went down. More than 750 guns have been stolen out of vehicles this year in Hillsborough County, Fla. and in Nashville, authorities said.

“It’s just city after city,” says Chuck Wexler, executive director of the Police Executive Research Forum. “Homicides and shootings are what police chiefs are talking about.”

When it comes to self-defense, Thompson believes his firearm serves as “more of a statement,” deterring attackers to a degree and making himself less of a target. He carries his first firearm with him everywhere, leaves two at home and has one in each of his three cars. He’s also become a collector, keeping some firearms more for hobby purposes than to carry as self-protection. Even with all these guns, he never feels fully comforted.

“You’re never going to feel relief, but you feel a small sense of security,” he says. “I know I at least attempted to protect myself.”