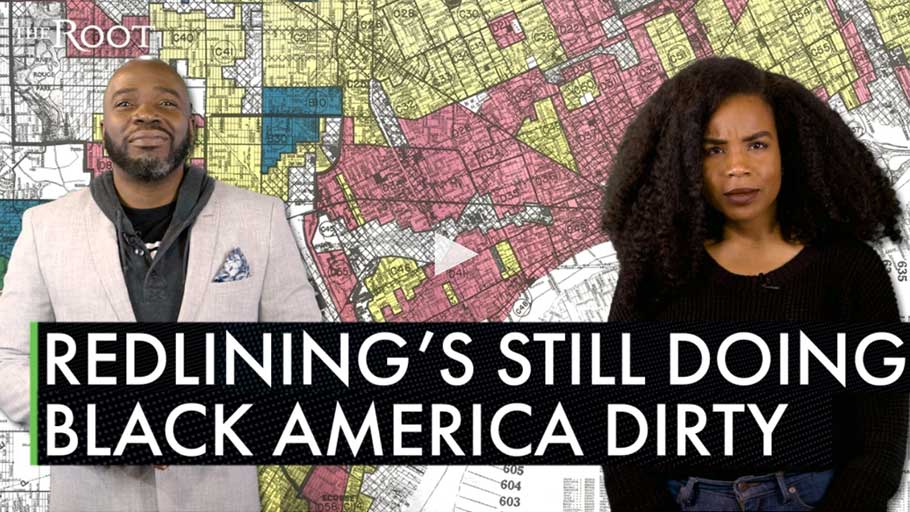 By Michael Harriot, The Root —

Money is a social construct. We accept the idea that a dollar issued by the U.S. government is worth more than Monopoly money. Even if our currency were backed by gold, the precious metal is only valuable because we have collectively agreed to its worth. The American idea of race, specifically whiteness, is an economic construct. From the beginning, it has existed in conjunction with trade, ownership and the laws of supply and demand.

To see how the government-sanctioned policy of redlining impacts America 80 years after it was instituted, one must first understand the era in which the policy originated. In the mid-193os, to lift America out of the Great Depression, the New Deal created huge economic programs sponsored by the federal government.

We must remember that, because everyone was poor during the Great Depression, these maps did not reflect economic status. In fact, upscale black neighborhoods like LaVilla and Sugar Hill in Jacksonville, Fla., home to Duke Ellington, Ella Fitzgerald, and Zora Neale Hurston, were deemed “too risky,” by the HOLC.

But instead of using these maps only for HOLC refinances, which would have been racist in and of itself, banks began using these maps for all home purchases and refinances. Again, with Jim Crow segregation in place, blacks couldn’t simply move to the non-redlined, white neighborhoods. So, because of this, as generations of Americans lifted themselves out of poverty, black people could not take part in the primary driver of wealth, homeownership.

Redlining was outlawed in 1968 by the Fair Housing Act, but it still affects almost every economic aspect of black communities to this day.

The University of Richmond has compiled high-resolution images of the original redlining maps, and it is startling to see how much they reflect the racial, economic and wealth disparities in cities across America.

Residents who live in redlined areas pay higher interest rates and are denied mortgages more often than whites with the same credit and income, according to reporting for the Center for Investigative Journalism. People in redlined areas pay higher auto insurance rates, ProPublica reports. Homes in black neighborhoods are valued, on average, $48,000 less than homes in white neighborhoods with similar crime rates and amenities.

According to the Lincoln Institute of Land Policy, about 36 percent of education funding comes from local property taxes. These lower home values, which are the direct result of redlining, means that schools in black neighborhoods receive less funding. This is why, according to a 2019 study by Edbuild, schools serving nonwhite students receive $23 billion less in funding than majority-white schools despite serving the same number of students. It’s why the average nonwhite school district receives $2,226 less per student than a white school district.

Because poverty, education, or lack thereof, and crime rates are interrelated, it makes sense that black children, who are more likely to live in undervalued homes inside underfunded school districts, are also more vulnerable to the criminal justice system. This is the real school-to-prison pipeline.

Even though blacks and whites use drugs at about the same rate, blacks are three times more likely to be arrested for possession of an illegal substance. This is partly because police patrol formerly redlined areas and make more drug arrests. In Baltimore, maps of poverty, drug arrests and police shootings are nearly identical and are almost totally contained within the boundaries of formerly redlined areas. A study by the state of Maryland Public Defenders Office also found that 13 of the 15 zip codes where suspects routinely receive higher bail amounts were in redlined areas.

These things are not a coincidence. They all stem from the fact that black people have been denied access to intergenerational wealth building by a government policy that is interwoven into the fabric of American society. This nation became an international economic superpower because it was built on the foundation of slavery.

But if the middle class is the lifeblood of this country, then racism is in America’s DNA.