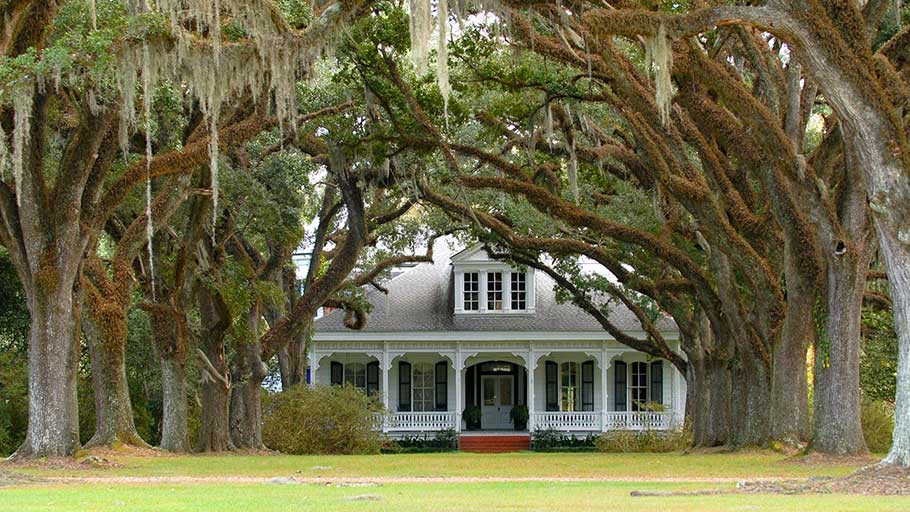 Stop Getting Married On Plantations

You Are Here: Home » Blog » Editors' Choice » Stop Getting Married On Plantations

Aesthetically, the antebellum plantations of the Old South are undeniably beautiful. But they’re built on human degradation.

By Patricia J. Williams, The Nation —

It was not a kind thought that flitted across my mind while I was waiting in the airport in Montreal. The weather was bad, my flight was late, and I was having lunch on the “American side” of the terminal, listening to a big, jovial man talking about his son’s wedding on a plantation in Charleston, South Carolina.

The man was discussing ordinary things—the weather, the bride, the wine served, what music they played. Everyone, he said, was dressed in antebellum clothing.

“Dancing on graves!” is what went through my mind.

Was I being uncharitable? I am the third generation in my family whose body is not legally owned by others—the carnal issue of a legal fiction and a political proof that reigned supreme in the not-so-distant past. My mind drags those details into the present involuntarily, for these feelings are deep in me. At the same time, this is the narrative by which I was protected, insulated, cautioned, and by some measures made paranoid: They might own your body, but they can never own you.

I am safest, I learned from my grandmother, when I discipline myself to leave the body behind. It is a mystery, a kind of magic, to be raised both within and without, to see and to see oneself seeing. Still, there is a certain traumatic remove in the distance required to surveil oneself from afar—the stress that W.E.B. Du Bois called “double consciousness.”

But back to the “American side” of the Canadian airport. The man and his companion seemed like good people—happy and racially innocent, swaddled in a kind of bubble of bliss, however radioactive it might have seemed to me. I wondered again if I was being uncharitable. This kind of self-consciousness is ingrained by now; more than one white friend has called me “too politically correct” to ever relax. It is not the man’s fault, I am made to understand. After all, it is not a mortal sin to marry one’s child off in the magnolia- scented bosom of a Confederate mansion built and serviced by the invisible slaves. How could they know? Is it really their responsibility?

Recently, The Washington Post published a story about the discomfort some white people experience during tours of antebellum mansions in the Deep South. “My husband and I were extremely disappointed in this tour,” wrote one online reviewer, noting that her family had never owned slaves. “We didn’t come to hear a lecture on how the white people treated slaves…. The tour guide was so radical about slave treatment we felt we were being lectured and bashed about the slavery…. I’ll go back to Louisiana and see some real plantations that are so much more enjoyable to tour.”

These thoughts upset me. I set aside the vexed question of “real plantations” for the moment, gently, so that I could better digest my soup.

My friends are right: I don’t relax. This history is too resonant in my body. It’s not easy for me to work up any kind of nostalgia for a style of life that depended on slaves, hierarchy, imperiousness, and pomp. And I frankly despise how the tourism industry has underwritten childish rituals of antebellum dress-up in crinoline and whalebone and marketed them as romantic, swoony, and gossamer.

But I continue to explore this affective power as worthy of serious thought. I try to acknowledge the deep pleasure of that parent at his child’s wedding and to place it in a different part of my heart from the resentment I feel about the choice of venue. I try to winnow the anger I feel about how much of that cruel history has been steamrollered into oblivion by deep-fried, honeysuckled symbolism. The winnowing is hard work. And I sometimes feel another kind of resentment about how the burden of such emotional assortment falls disproportionately on black people.

Some time ago, the artist Kevin Beasley was interviewed for a short film titled Kevin Beasley’s Raw Materials. In the film, produced by the Whitney Museum in New York City, he reflected on the legacy of the cotton industry in his family’s history and in the American South, asking himself, “Why am I so mad at this plant? This plant is not doing anything except growing and being beautiful.” I completely understood the paradox: We hate the traces of slavery; no matter their innocence, the symbols summon pain. They pull a perfumed scrim over atrocity. It is the same reductive euphemism of those who refer to slaves as “African immigrants” or “indentured servants.”

In February 2019, the legendary sportscaster Warner Wolf was arrested in Naples, Florida, after defacing a sign at the entrance of the gated community where he lives, which reads “Classics Plantation Estates.” He allegedly tore off the word “Plantation.” Without condoning the vandalism, I was nonetheless heartened. It is too rare to hear of a white person so powerfully overcome by the same historical associations that occur to most African Americans. I felt as though “my” history might be more generously shared as comprehensively “ours,” as a pan-racially American history, with plantation life seen for all its complex and divisive repercussions.

Aesthetically, the antebellum plantations of the Old South are undeniably beautiful—flowering, gracefully constructed, with seemingly benevolent stretches of fields and lawns. But they’re built on human degradation, and so they live on as icons of romance premised on the fragile privilege of racial innocence, historical oblivion, and educational denialism. American schools do not teach our own history. We write much of it out of the grand narrative, gussying up the bad bits, playing down the sorrow. And then, in the spacious vacuity of mutual misapprehension, we butt heads, we bleed.

We stumble in circles, so close to one another and yet so far apart, locked out of the homes and neighborhoods that we forget we built together.

Patricia J. Williams is University Professor of law and philosophy, and Director of Law, Technology and Ethics at Northeastern University.