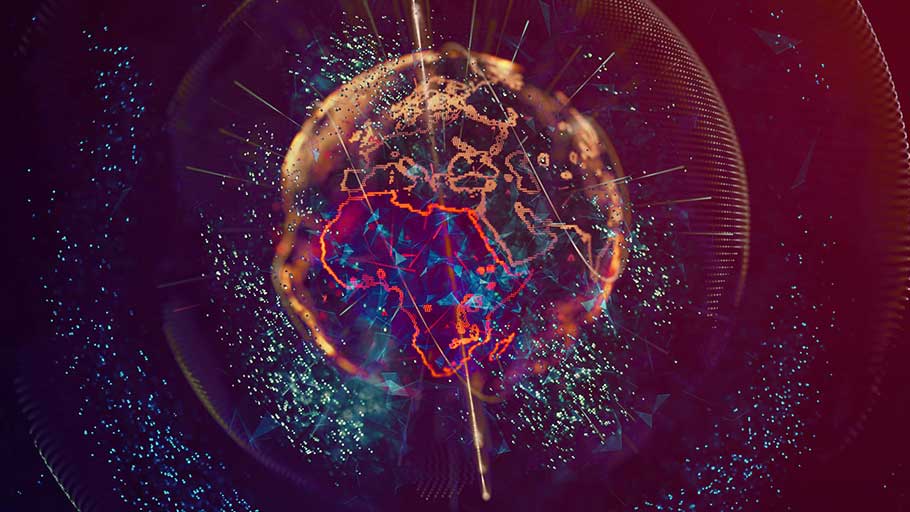 From Ethiopia to Tanzania and South Africa to Ghana, African nations are embracing this ledger technology to weed out graft.

On his first day in office as president of Tanzania in 2015, John Pombe Magufuli made a surprise visit to the Finance Ministry and berated officials who weren’t at work. It was the first in a series of steps Magufuli has taken that have won him popular support as an anti-corruption crusader even as his government clamps down on the media and critics. This November, his administration revealed that an unlikely partner had helped in cracking down on corruption.

By using blockchain technology, Tanzania’s government announced it had weeded out thousands of “ghost workers” from the public sector, ending the monthly outflow of 430 billion Tanzanian shillings ($195.4 million) in salaries to employees who existed only on paper. The country is far from alone. From South Africa to Nigeria, Ethiopia to Ghana, many of Africa’s largest economies that have long grappled with endemic corruption are turning to technology to curb financial crimes, target services to those in need and help crucial economic sectors.

In July, Nigeria’s customs service adopted blockchain technology — a digital ledger where financial transactions can be remotely stored and shared on multiple computer networks — confident that it will increase revenues by 50 percent by reducing corruption. In Ghana, where a majority of landowners are unregistered and lack title deeds, a local blockchain startup, Bitland, is working with local communities, using a digital ledger to build permanent and trackable land records. 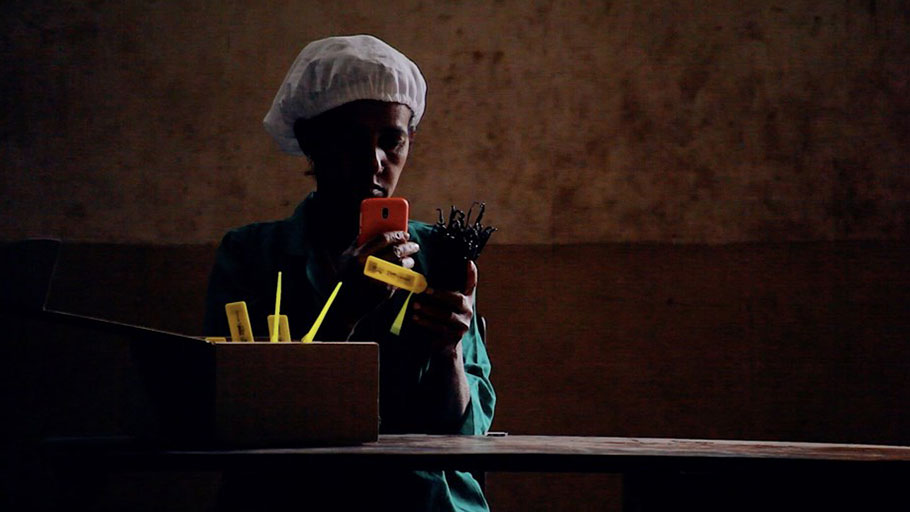 A worker scans the QR code on a bundle of vanilla pods in Madagascar. Source: Ambrosus

Across the continent, in Kenya, the government announced in June that it would use blockchain to monitor the construction and distribution of 500,000 homes for low-income citizens by 2022. The South African Reserve Bank is experimenting with an Ethereum-based ledger technology for bank-to-bank transfers. In Madagascar, Ambrosus, a public blockchain and internet of things platform, is partnering with Premium Goods, a French flavoring company, to provide quality assurance to the global supply chain of one of the world’s most precious commodities: bourbon vanilla. This is the first time the vanilla supply chain has been digitized.

And in May, Hong Kong-based blockchain research firm IOHK joined with the Ethiopian government to help the east African country better monitor the supply chain of its signature crop, coffee, to help farmers earn more. This isn’t a fad, say experts, but a nod to the transformative potential of a technology that many African nations believe can help them leapfrog earlier tech transitions they’ve missed.

“Blockchain creates an immutable trail of information, allowing for the full traceability of every transaction,” says Dalton Kisanga, a professor of informatics at Dar es Salaam Institute of Technology.

The use of blockchain to curb corruption is, of course, not restricted to Africa. The United Nations has started to advocate the technology at relief camps for refugees to reduce pilfering of food and other resources. In the coffee world, Starbucks started a pilot project in March that lets farmers in Costa Rica, Colombia and Rwanda track their beans.

But while previous waves of digital technology entered Africa either late or in unorganized, chaotic streams — dozens of little-regulated crytocurrency exchanges have cropped up in recent years — for once the continent is at the forefront of adopting a new technology and doing so in a planned manner. No other part of the world needs an unconventional fix to corruption the way Africa does, with repeated failures to end it. According to Transparency International, 36 out of the 80 countries perceived as most corrupt are in Africa.

The world’s fifth-largest coffee producer, Ethiopia depends on the sector to employ 15 million people out of 105 million. But 95 percent of the country’s coffee is produced in small rural farms. The unorganized nature of the industry has for years left farmers vulnerable to corrupt middlemen, while purchasers can’t guarantee the origins of the beans they’re buying. That’s what IOHK hopes to change through its partnership with the government, with each step of the process recorded in the digital ledger. Anyone with access can check where the beans originated and track all participants along the way. “Blockchain can be used to do some magical things to help coffee farmers enjoy the fruits of their labor,” says John O’Connor, IOHK’s director of African operations.

For many African tech entrepreneurs, what’s also exciting is that, in several cases, it’s locally developed blockchain technology — like Bitland — that countries are adopting. “What’s truly exciting is that Africa is building whole new stacks of technology, infrastructure and decentralized applications that fit the continent’s particular needs,” says Jason Eisen, founder and CEO of Utu, a Nairobi-based blockchain startup.

One increasing need across the continent is land registration, as farmers and communities battle land grab by governments and domestic and foreign corporations. That’s where companies like Bitland and Ambrosus come in. By “providing standardized and verifiable land registries,” blockchain can allow farmers, homeowners and land tenants “to utilize a trusted and decentralized ledger to demonstrate ownership of their property,” says Angel Versetti, co-founder and CEO of Ambrosus. In southern Ghana’s Kumasi metropolitan area, Bitland is working with 28 communities to register land titles to a public blockchain — and hopes to expand the project nationwide.

Not everyone is thrilled by the adoption of blockchain technology by governments. After all, the technology comes with privacy concerns. Where’s the guarantee, wonders Tomitho Anthony, a Dar es Salaam-based lawyer and human rights activist, that “information may not fall into the hands of humans, who are, by their very nature, skilled cheaters?” 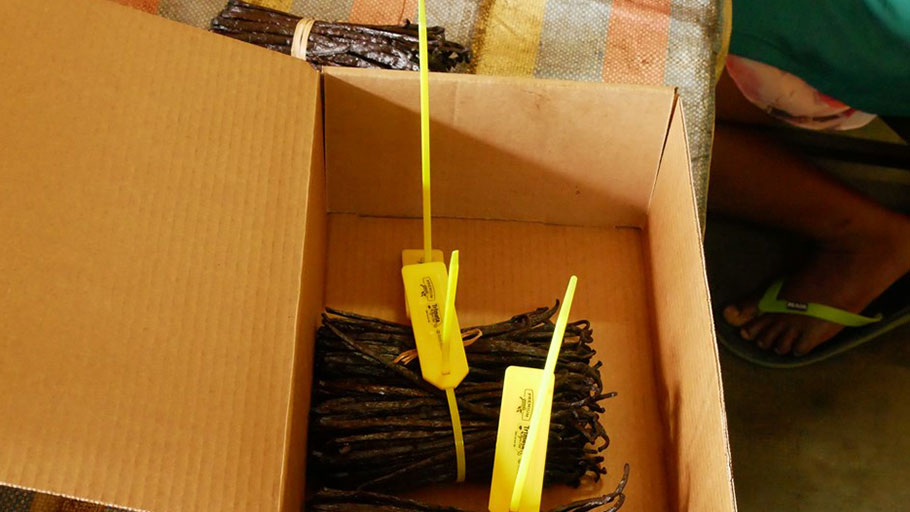 Bundles of vanilla pods with QR codes that can be scanned to digitize the supply chain. Source: Ambrosus

There’s also no guarantee that governments won’t withdraw from their embrace of the technology if increased transparency starts producing revelations about political leaders. Jim Yonazi, Tanzania’s deputy permanent secretary minister for works, transport and communications, says the government is “still researching to know its potential and its risks,” before it decides to roll out blockchain across sectors.

But other arms of the Tanzanian government are looking to blockchain as a savior, without waiting for a central command. The state-run electricity utility firm Tanesco is exploring the use of blockchain to track electricity production and distribution, hoping to enhance network transparency and reduce costs. “Blockchain is capable of breaking our existing value chain and making power generation and distribution even smarter,” says Esau Mwinuka, Tanesco’s managing director.

For leaders like Magufuli, whose street cred hinges on anti-corruption campaigns, turning back time won’t be easy. And by the time they do, digital ledgers might have recorded enough to embarrass the wrongdoers among them.