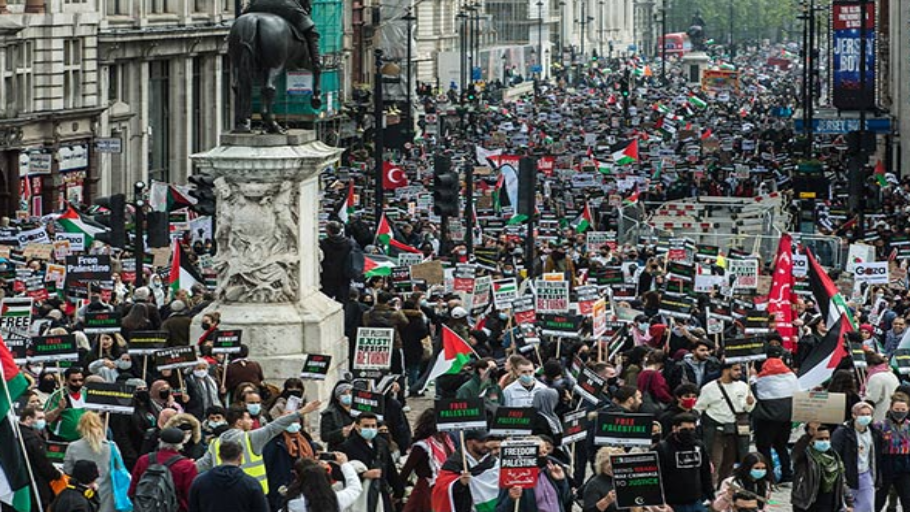 180,000 demand freedom for Palestine on streets of London

You Are Here: Home » Blog » News & Current Affairs » 180,000 demand freedom for Palestine on streets of London

By Isabel Ringrose and Nick Clark —

Around 180,000 people marched in central London on Saturday to demand freedom for Palestine.

Protesters carried Palestinian flags and flares and brought anger to the streets.

Crowds assembled at Embankment and marched passed parliament to Hyde Park. The march was militant and had many young Muslim women on it.

Protesters Marie, Nadia and Miriam said it was “amazing” that so many people took to the streets. “I didn’t think so many people would be out,” Nadia said.

Marie said “it’s very important” that so many people are protesting.

“The media shows one side,” she said. “We need to show the other side.”

Another protester said that, thanks to social media, the world can now see what’s happening in Palestine. “And we can show that we support them here,” she added.

“Seeing our support helps gets them through.”

Hayat is a Palestinian living inside Israel’s official borders in Tel Aviv. She can’t get a flight home because of the Israeli attacks. “I’m worried for my friends and family,” she told Socialist Worker.

“Israeli settlers are marking out Arab houses and incite violence on the people who live there.

“They’re trying to kill everyone who looks like an Arab. My mum wears a hijab and she needed to go to the hospital. I had to tell her not to leave the house because it isn’t safe.” 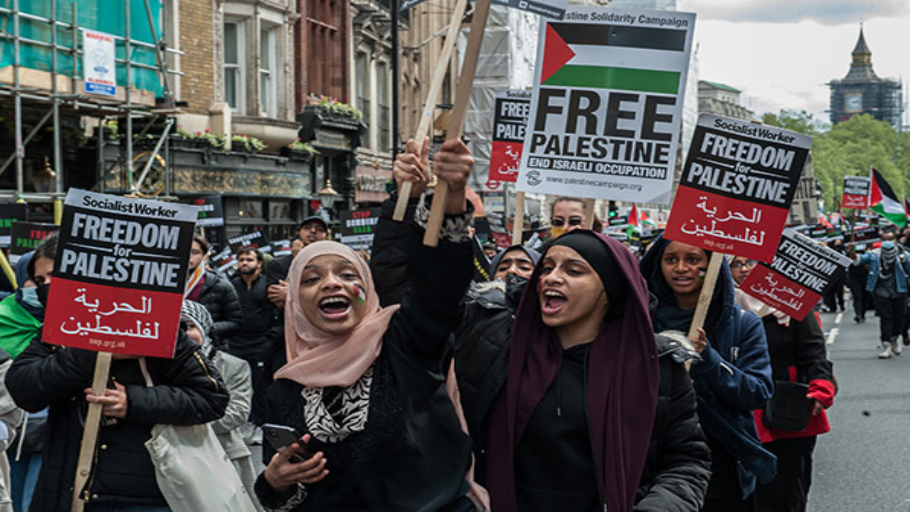 There were many young Muslim women on the march (Pic: Guy Smallman)

Hayat explained that inside official Israel Palestinians receive worse education, have no democracy and “are second class citizens”. “Not one Arab has been given land, but the settlers get ours,” she said.

“Israel always wants more and Palestinians can’t build houses. They built a village on my family’s land but we’re only allowed a small bit to farm on.”

On the demonstration protesters chanted, “Free, free Palestine,” and, “Israel is a terror state.”

Others chanted, “End the aggression, stop the crimes, Israel out of Palestine.”

Jackie and Eva said they’re here to defend “human rights”. “Innocent kids are being bombed,” one of them said. “This has been happening for years.

“But now people are realising they have to do something. We’re all shocked at what’s happening.

“It was Palestinian land to begin with—give them back their land. The whole area was Palestine and it should be again.”

Zein told Socialist Worker she “wholeheartedly supports the liberation of Palestine”. “Britain and the US need to cut funding to Israel,” she added. “The way to make that happen is protest and to boycott—that’s what has the most impact.”

Zein said the way to free Palestine is a “one state solution”.

“Before 1948 Palestinians, Arabs, Christians, Muslims, and Jews lived together. That’s the make up of the Middle East.”

The demonstration this week was twice the size of the week before. And it had a feeling of wanting to do more than simply go through the motions of protest.

The anger and militancy need to be channeled into concerted pressure on the Israeli regime and its backers, not least Boris Johnson’s Tories.

Protests also took place in as many as 63 cities and towns across Britain. They showed that even though Israel’s bombing has stopped, people are still angry at Israel’s ongoing crimes against Palestinians.

As many as 4,000 people joined a march in Manchester city centre. The protest gathered in Piccadilly Gardens in the city centre and marched around the city before returning for a rally.

Martin, who joined the protest, told Socialist Worker, “It was very young and angry, with lots of people from Palestine and the Middle East.

“People were focussed on what Israel has done to Palestinians over the years. A lot of the anger from speakers was about the way police attacked the Al Aqsa mosque in Jerusalem even after the ceasefire.

“There was a lot of anger at the role of Israel and its history of persecuting the Palestinians.”

One speaker at College Green said, “In solidarity with the people of Palestine, we stand in admiration with the bravery of the Palestinians at the face of the brutality of the Israeli forces.

“And we are going to continue to do so, until these brutal-savage-crimes end.

“We watched the scenes unfolding on our screens while peaceful worshipers in their lines of prayers are being bombarded with stun grenades, tear gas and rubber coated bullets.”

There were as many as 1,500 people on the march in Birmingham. Hope, an activist, said, “It was super young and super militant.

“We went marching all around Birmingham, and shut down the roads.”

Hope added the ceasefire had “If anything made people more determined. What they didn’t want to happen was what happened other times when Palestinians get screwed over again.

“So there was an element of celebration that it had ended, but also determination.”

There was similar anger in protests across Britain, including in Newcastle, Lancaster, Nottingham, Bristol and Cardiff.

Nathan, who joined the protest in Newcastle, told Socialist Worker, “The march was quite angry, and continued after the official protest had ended.”

He said Palestinians took to the steps of Grey’s Monument, chanting and letting off green and red smoke flares. “The protest was bigger than we expected after the ceasefire,” he said.

“There was about 600-750 people. People were angry about Gaza, but they didn’t want to stop protesting against the whole apartheid regime.”

Some 500 people joined a protest in Lancaster, organised by activists from the university’s Friends of Palestine society. They gathered at Dalton Square in the centre of Lancaster, then took to the road for an impromptu march around the city.

Audrey from Lancaster told Socialist Worker, “A lot of the speeches were about Israel’s long-term abuse of Palestinians. People knew that Israel had already invaded the Al-Aqsa mosque since the ceasefire.”

And in Nottingham, where another 500 people marched, Richard said, “The anger is not over just because there’s been a ceasefire. It doesn’t change anything—and that was the gist of a lot of the speeches.” 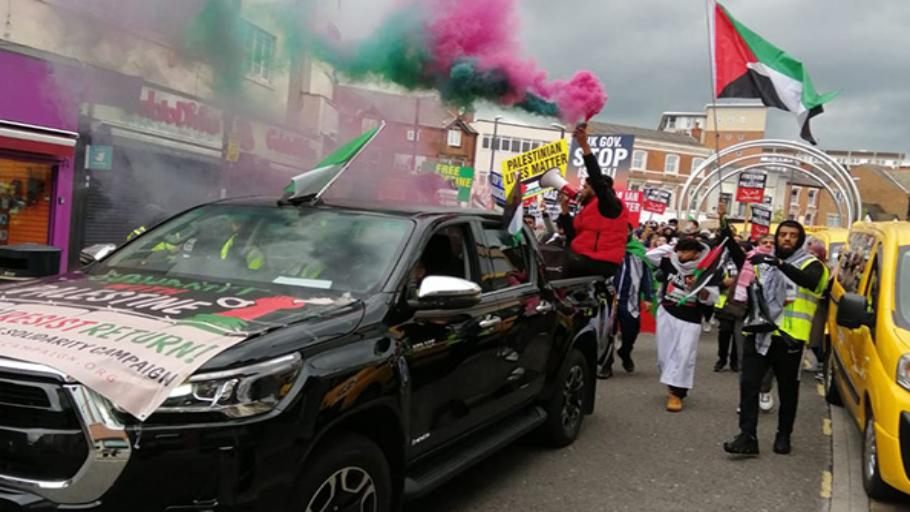 Local news website Nottingham Live reported that one speaker said, “We are sending a message to Palestine and leaders all over the world that we will not remain quiet.

“We must not return to violence, oppression and apartheid.”

In Cardiff, some protesters began with a rally outside BBC Wales headquarters, which cops had stopped them marching to the previous week.

Protesters were angry at how media such as the BBC has portrayed Israel’s assault on Gaza as a war between two equal sides.

The protesters marched through the city to Cardiff Central library, where they sat down for a minute’s silence.

Mohammed Hadia, one of the organisers, read out the names of the Palestinian children who died in the airstrikes. He said, “This was not a war on terrorism. This was a war on children, on human rights, on justice.”