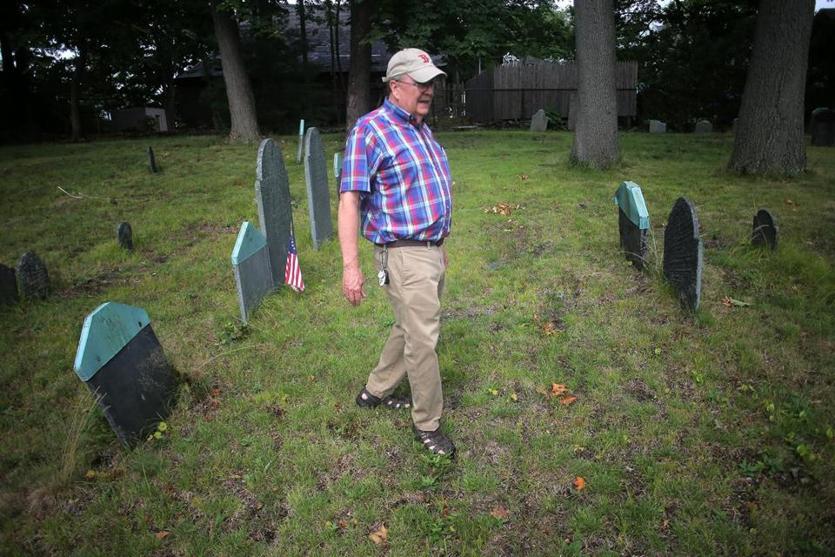 A reckoning over the North’s role in slavery

You Are Here: Home » Blog » News & Current Affairs » A reckoning over the North’s role in slavery

Ben Jacques walks among the unmarked graves of slaves at the Old Burying Ground in Stoneham. Photo by Lane Turner, Globe Staff

The Old Burying Ground in Stoneham is one of those classic New England cemeteries with markers honoring the memory of Colonial settlers as well as activists in the abolition movement.

For much of the year, sections of the nearly 300-year-old cemetery are closed to the public. But every so often, the Stoneham Historical Commission opens up the space for guided tours of the tombstones of prominent community members, and the unmarked graves of the slaves who served them.

Ben Jacques had just started learning about his town’s early history when he went on a tour of the graveyard. It made him wonder, who were these unnamed people that helped to build Stoneham?

The retired Massachusetts College Of Liberal Arts English professor wrote a book, “In Graves Unmarked: Slavery and Abolition in Stoneham, Massachusetts,” in hopes of finding the answer to that question.

“Whenever we think of those who came before us we think of our town ancestors, the rich white men that we put up plaques for,” said Jacques. “But it’s important for us to know about the slaves and free African families who worked and bled in our towns. We have to take ownership of that history, too.”

For most, the picture of slavery in the United States is that of sprawling Southern plantations, but American slavery has many roots in the North.

Massachusetts was the first colony to legalize slavery in 1641, and by 1754, there were nearly 4,500 slaves here, according to a census from the time. This history is often overshadowed by the state’s later role in the abolition movement, but some believe it’s time for a fuller examination of the past and a conversation about what it means for the future.

Virtually every prominent community in Massachusetts — from Brookline to Salem to Plymouth — had slaves, according to historian Kerri Greenidge, co-director of the African American Freedom Trail Project at Tufts University.

“The idea that any major town in the state, especially those with seaports, doesn’t have a history with slavery is ahistorical,” said Greenidge, a senior lecturer who specializes in 17th- and early 18th-century African-American history. “For many slaves who arrived in America, New England was among their first destinations, particularly during the early 18th century.”

In Stoneham, wealthier families had an average of two slaves, according to Jacques. They were most likely maintaining farmland, caring for the home, and doing craftwork such as shoemaking and weaving.

This was reflective of the kind of slavery that existed across Massachusetts. The economy and climate didn’t lend themselves to the kind of large-scale slavery that was developing in Southern colonies, but many prominent families kept slaves both for free labor, and as a sign of their wealth.

Captain Jonathan Green, the fourth generation of a prominent Stoneham family, was a town selectman, treasurer, and served in the Revolutionary War. He was also a slave owner, according to Jacques’ research. A 1738 entry in his diary states, “Bought our Negro.”

“Slavery was ubiquitous up here despite even the earliest ideas of freedom and justice,” Jacques said. “Somehow people found a way to justify it in their minds.” 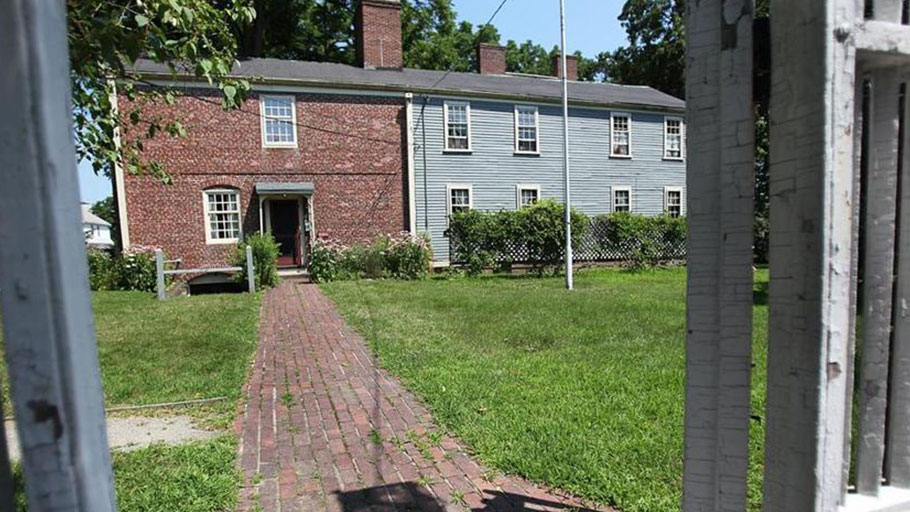 A slave dwelling behind the Russell Library on North Street in Plymouth is part of the African-American history tour. Photo – Plymouth Antiquarian Society

One of the most noteworthy slave owners in Massachusetts was Isaac Royall Sr., the owner of a sugar plantation in Antigua, who moved to Medford in 1737 and brought with him 27 enslaved people.

The number of slaves he owned fluctuated while he lived in Medford because he continued to buy and sell them after his arrival. His home and slave quarters still stand as one of the most prominent reminders of slavery in the state.

The Royall House Association was formed in 1906 to designate the house as a historical site, but it wasn’t until 2005 that the decision was made to acknowledge and advertise the slave quarters as part of the home’s history.

“Visitors used to challenge me on the historical, well-documented fact that slaves existed here, but I’ve found that an evolution has taken place,” said Penny Outlaw, the co-president of the Royall House Association, who has served on the board for 12 years. “Many people say they feel they need to come and learn more about this.” 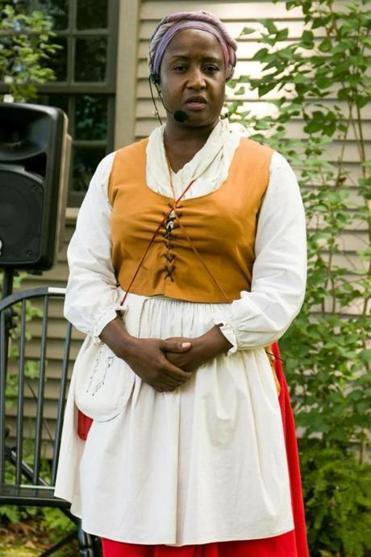 Actor and living historian Tammy Denease portrays a slave owned by the Royalls. “I find that this kind of education is especially necessary in the North where the history of its role in slavery is so limited,” she said.

Actor and living historian Tammy Denease has worked with the Royall House & Slave Quarters to bring life to Belinda Sutton, an African-born woman who was enslaved by the Royalls. Much of what is known about her comes from a 1783 petition to the Massachusetts General Court, in which she recounted her life story and claimed a pension that was promised to her in the estate of Isaac Royall Jr.

Her request was approved and signed by John Hancock, but Sutton would have to petition the court again at least two more times to get her promised yearly sum. Using these records, Denease has created a portrayal of Sutton for programs at the Royall House.

“I bring historical women to life and I become a representation of the person,” said Denease. “I find that this kind of education is especially necessary in the North where the history of its role in slavery is so limited.”

Denease lived much of her childhood in Columbus, Miss., where she said the remnants of slavery were too prominent to ignore. As the great-granddaughter of a former slave, she was surprised to learn how little Northerners knew about slavery outside of figures such as Harriet Tubman and Frederick Douglass.

“The North tries to downplay its slavery and its role in the slave trade. In a lot of places, people don’t realize that it even existed here,” said Denease. “But when they do learn, the response is typically positive. There’s a desire to learn more.”

In Plymouth, known as “America’s Hometown,” efforts to shed light on this piece of early history has drawn public interest.

Donna Curtin, executive director of the Pilgrim Hall Museum, is leading an effort to incorporate the stories of slaves and free African-Americans into its programs.

The museum is currently working on an exhibit about prominent women in every century of the town’s history, including the story of Hester Winslow, who lived there as a slave during the Revolutionary era.

It also offers several African-American history tours, including a walking tour of the back side of Plymouth’s Burial Hill cemetery that was designated for Negroes. The museum also provides information about slavery in the area on its website, pilgrimhallmuseum.org.

“One of the goals is to help people connect what is sometimes taught as a national history more locally,” said Curtin. “And we have been happily surprised to find a very mixed group of people of different backgrounds looking to learn more.” 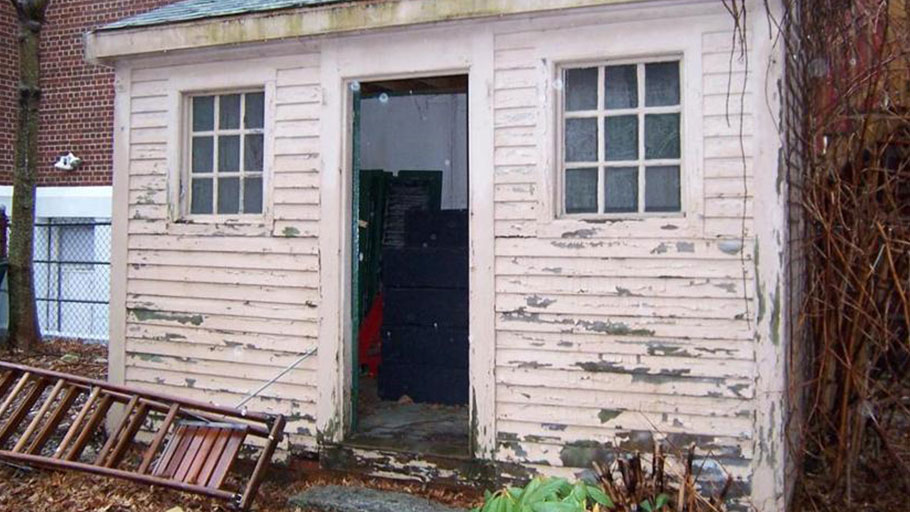 A slave dwelling behind the Russell Library on North Street in Plymouth is part of the African-American history tour. Photo – Plymouth Antiquarian Society

But as people begin to face their history, there are questions of how to move forward. In Brookline, residents grappled with the discovery that Edward Devotion, the namesake of the Edward Devotion School, was a slave owner. Some residents felt the name should be changed, but others were reluctant.

In May, Brookline Town Meeting voted to rename the school. Two advocates for the change, residents Deborah Brown and Anne Greenwald, said there are still people who don’t understand why it needed to be be done.

“There’s still a lot of reluctance to change,” said Greenwald. “Those who have this idea of holding onto tradition don’t realize that the tradition is just one perspective on what’s happened historically, and it’s the perspective of oppressors.”

Brown and Greenwald have proposed the creation of a wall in the school building that conveys the history of the name and why it was changed.

In 1780, when the Massachusetts Constitution went into effect, slavery was legal in the Commonwealth. However, by 1783, it was abolished with rulings by the state Supreme Judicial Court.

Massachusetts would go on to be such a hotbed of abolitionist activity that its slaveholding past was largely forgotten, but reminders of the role it played in building the state remain.

“An acknowledgment of slavery in most communities is a source of collective embarrassment as well as personal embarrassment,” Brown said. “In Massachusetts, there are families who directly benefited from slavery and are wealthy because of it. These discussions are forcing many to learn about slavery and reckon with it in a way we’ve been able to avoid for so long.”