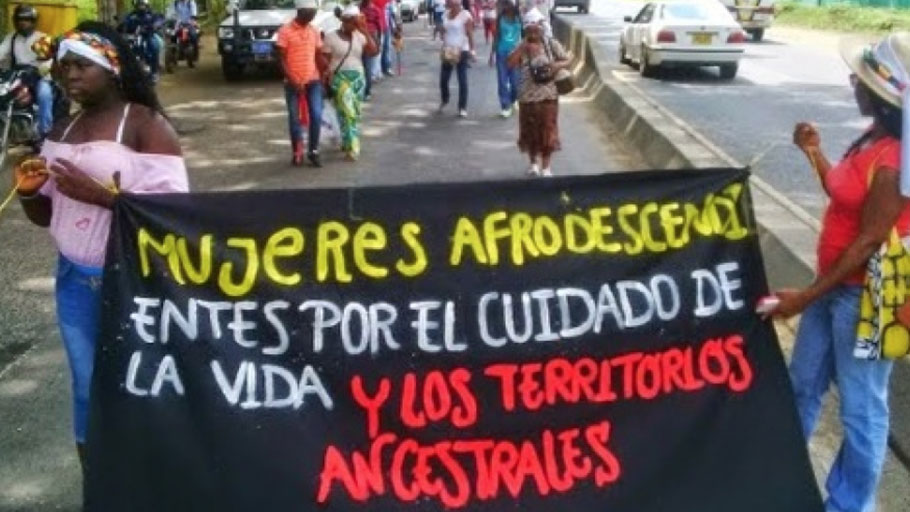 At a time when Colombia’s peace implementation is threatened in part by government failures to fulfill obligations under its peace accord with the FARC, global advocates are encouraging international solidarity with women who are struggling for a peace that includes their human rights. (Photo: darioadn.co)

In Colombia, women are demanding an end to the impunity, silence and invisibility that fuel attacks on female human rights defenders

Tumaco – Afro-descendant women’s organizations in Colombia are marking International Women’s Day by highlighting Black women’s role in peacebuilding and calling for reparations for conflict-related gender-based violence and other human rights violations. As members of communities that have long suffered governmental neglect, Afro-Colombian women and girls have faced disproportionate rates of conflict-related human rights violations with minimal access to justice or services. Ongoing violence in the wake of Colombia’s peace accord with the FARC, including killings of human rights defenders and displacement of entire communities, has especially impacted Afro-Colombian and Indigenous Peoples.

Today, in Tumaco, Nariño several organizations, including Caminos de Mujer and Palenque Tumaco will hold film forums in local neighborhoods, and will march for justice and reparations for Afro-Colombian victims of conflict-related gender-based violence. They will call for action to prevent ongoing gender-based violence, and to end the impunity, silence and invisibility that fuel attacks on women human rights defenders. Tumaco is among areas that have witnessed deepening insecurity as armed actors filled the post-FARC security vacuum that resulted in part from the government’s failure to consult with Afro-descendant and Indigenous authorities in security planning. The march aims to counter the fear and silence that ongoing violence imposes in Tumaco.

Proceso de Comunidades Negras (PCN), or Black Communities Process, a national network of Afro-descendant organizations and activists, will publish interviews with Afro-Colombian women activists who have struggled tirelessly for meaningful peace, inclusive of racial and gender justice in Colombia. The interviews serve to memorialize the role of Black women leadership in peacebuilding, including the successful struggle for inclusion of a chapter in Colombia’s Peace Accord devoted to ethnic and racial justice. They also document direct participation of Black women in decision-making during implementation of the Peace Accord.

“Black women in Colombia have been at the center of the struggle for Black people’s self-determination and they are today significantly leading this process; that is why Black women have been directly targeted in the last decade by violent forces looking to take or maintain control of their territories and bodies to halt the resistance and the power that comes from that leadership,” said Charo Mina-Rojas of Proceso de Comunidades Negras.

March 8th will also witness the launching of a report analyzing the economic roots of violence against Afro-descendant women. It focuses on the port city of Buenaventura and the Northern Cauca region, as exemplifying the harmful impacts of neoliberal policies and projects on Afro-descendant ancestral and traditional territories, and on the physical, cultural and spiritual integrity of Black women. In the majority Black city of Buenaventura, for example, port activity contributes significantly to Colombia’s economy, but local residents lack regular running water, hospitals, and adequate education. The report finds the economic system to be a major perpetrator of violence against Black women in Colombia, and Black women to be “victims of capitalist development.” It suggests that meaningful peace in Colombia requires addressing the systemic neglect and discrimination undergirding the extreme inequality that fuels conflict in Colombia and leaves Black women disproportionately in poverty and vulnerable to additional human rights violations.

“They [government and armed forces] have tried for centuries to take everything from us, but it has been impossible to take away our dignity and our sense of who we are, where we belong and where we want to be; that is, our vision. That is why their mission is to annihilate us, as people, as women, as a political and economic force and power,” said Danelly Estupiñan, of Palenque Kongal, Proceso de Comunidades Negras. She added, “it is proven that they won’t succeed,”

At a time when Colombia’s peace implementation is threatened in part by government failures to fulfill obligations under its peace accord with the FARC, global advocates are encouraging international solidarity with women who are struggling for a peace that includes their human rights. “Afro-descendant and Indigenous grassroots women leaders in Colombia provide an example for how to organize for meaningful and inclusive peace,” said Yifat Susskind, Executive Director of MADRE, an international women’s human rights and humanitarian organization. “On this International Women’s Day, we stand with them in their call for Colombia’s government to uphold its commitment under the Peace Accord to meaningfully consult with Afro-Colombian and Indigenous authorities and organizations, including women’s groups, in peace implementation.”

J.M. Kirby, Esq. is director of campaigns for the human rights group MADRE, where she provides strategic advocacy services and support for grassroots women’s organizations in Latin America and the Middle East. Before joining MADRE as staff, Kirby dedicated her time to human rights advocacy in support of communities fighting for social and economic justice in the U.S., and consulted for domestic and international organizations focused on gender justice. She has represented gender, racial and economic justice causes in local, national and international policy settings.