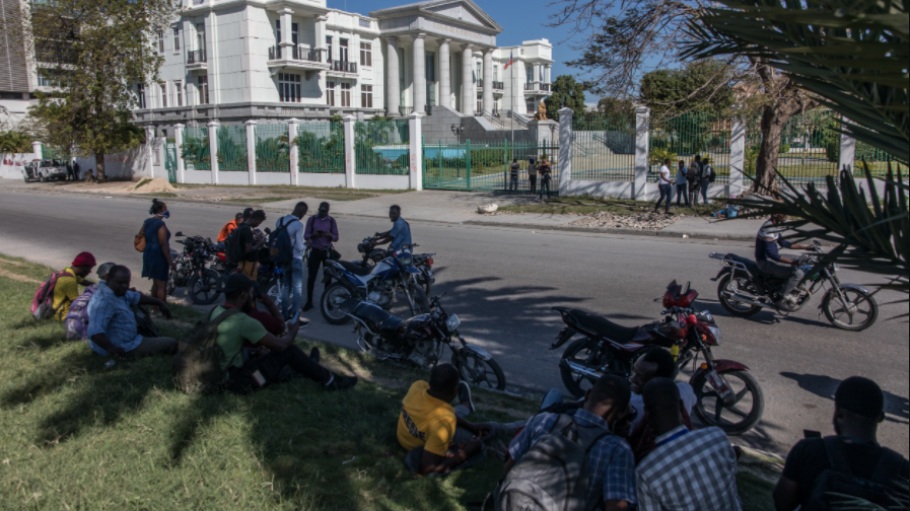 Haitians awoke Monday to empty streets, a tightened police presence and a deeper political crisis: Now there are two men who claim to be the nation’s president.

In a video shared on social media, Jean-Louis, sitting next to a Haitian flag, said he accepts “the choice of the opposition and civil society to be able to serve my country as provisional president of the ruptured transition.”

The installation was immediately condemned by Haitian Justice Minister Rockefeller Vincent, who called it an “illegal and unconstitutional” move “under the manipulation of anti-democratic and putschist forces.” Undeterred opposition leaders began referring to Moïse as the “ex-president” and “defacto” chief of state. But some analysts believe Haitians, disillusioned by decades of bad governance and cynical about politics, are unlikely to back the judge in his claim.

He was in hiding Monday and Moïse still ruling from the National Palace.

“I don’t know if he is strong. The opposition is weak,” Robert Fatton, a longtime Haiti watcher and political science professor at the University of Virginia, said about Moïse. “The opposition doesn’t really generate a credible alternative and the international community is afraid of massive instability. In that vacuum, Jovenel remains the main guy.”

The attempt at creating a parallel government came after government officials announced the arrest of 23 people, including Supreme Court Judge Yvickel Dabrésil, on Sunday, in what authorities are calling an attempted murder and coup against Moïse. The president’s detractors and civil society groups contend the embattled leader’s term ended Feb. 7. Moïse, a 52-year-old entrepreneur, disagrees and has said he still has a year left in office.

Haitian opposition leaders contend the arrests are the government’s way of cracking down on dissent and part of a larger pattern of harassment against detractors. Late Monday, Moïse issued a decree removing three Supreme Court judges who were on an opposition list of potential replacements to the president. Civil society leaders condemned the move as illegal, noting Article 177 of the constitution, which states Supreme Court judges are “irremovable.”

Earlier in the day, Haiti National Police also posted a wanted poster on its Facebook page for the arrest of former Port-au-Prince Mayor Youri Chevry, a critic of Moïse, accusing him of several crimes, including attempted assassination, though no details were provided.

Legal experts, including the head of a judges’ association, believe Sunday’s detentions were illegal because the law forbids the arrests of anyone between the hours of 6 p.m. and 6 a.m. unless in the commission of a crime. Police have not addressed the matter and a spokesperson did not respond to request for comment.

The escalating showdown between Moïse and the opposition risks plunging Haiti into an even deeper crisis at a time when the country is already facing a worsening spate of gang-driven crime, an alarming uptick in kidnappings and a crumbling economy.

“I think what you’re going to get is instability,” Fatton said. “We don’t know if the next crisis is going to be even nastier than the previous crisis.”

The U.S. State Department and the United Nations both held off on condemning the arrests Monday. In similarly worded statements, their respective press teams said they were aware of the detentions and awaiting the police investigation. Both have recognized Moïse’s claim that his term ends February 7, 2022.

“The situation remains murky and we await the results of the police investigation,” a State Department spokesperson told the Miami Herald, adding that both sides should focus on ensuring legislative and presidential elections “as soon as technically feasible.”

“The remarkable lack of popular response to calls for mass protests in recent weeks indicates that Haitian people are tired of endless lockdowns and squabbling over power,” the spokesperson added.

The United Nations echoed the same sentiment over the arrests and putting an end to the crisis, with Secretary-General António Guterres’ spokesman, Stéphane Dujarric, stating they were following the situation “with worry and with concern.”

“I think it’s very important that all stakeholders address their differences through peaceful means,” he added.

But neither side is showing any sign of budging. The Armed Forces of Haiti affirmed Monday that they are backing Moïse, releasing a statement in which they announced plans to fully assume their responsibilities “to assume national security, to defend territorial integrity, democratic order and the rule of law.”

Prior to the press note being published, local journalists reported two individuals were shot by soldiers. The two men, Alvarez Destiné and Meus Jeanril, were described as journalists shot while covering protests on the Champ de Mars across from the grounds of the National Palace. Jeanril was reportedly in critical condition.

“Clearly, Jovenel Moïse has ceased to be the constitutional president of Haiti,” opposition leader André Michel said. “It is up to the population to continue to mobilize, to induce them to step down from power in view of the installation of Judge Joseph Mécène Jean-Louis. We ask the international community to take into account the decision of the Haitian judiciary, which noted the end of the constitutional mandate of Jovenel Moïse. It must help Haiti to make the transition a success.”

Georges Fauriol, a senior associate at the Center for Strategic and International Studies think tank, characterized the U.S. and the U.N.’s response as an over simplistic reading of what’s unraveling in Haiti.

Last week, a constitutional committee mounted by Moïse published a draft of his new constitution, which is scheduled to be voted on by referendum in April. Among the proposed changes, the new magna carta eliminates the Senate, strengthens the presidency, mandates military service and programs all elections for every five years. It is only after the referendum vote that Haitians, according to Moïse’s plan, will get a chance to select a new Parliament and his successor in September.

Ruling by decree since January of 2020, Moise has so far resisted calls to practice restraint in issuing executive orders, or speed up the timetable on elections.

Fauriol said Washington appears to be taking a passive approach to the standoff that could backfire.

“To me, there is a brewing, bigger problem now which the international community is going to be stuck with, which is the process that Moïse has set in motion,” he said. “It’s sort of a three wheel vehicle that is falling apart, that can’t function.”

Fauriol said that because Moïse unilaterally appointed members to an elections council and drafted a new constitution without any political consensus, should the referendum and elections take place, they will be “built on a very suspicious foundation.”

“It’s going to be almost too easy for anyone who is elected from this process to be viewed by a portion of the electorate in Haiti, for starters, and a portion of the international community, as not really credible,” he said.

Fauriol added: “People need to realize the situation and that the cycle of events from the last couple of days is really on a slippery slope.”

That impending crisis has now gone beyond the opposition and includes the judiciary. Judge Jean Wilner Morin, president of the National Association of Haitian Magistrates, said more than 50 police officers were circling the Supreme Court Monday. The locks were changed and justices had no access. Later, judges were shut out from a school where they had planned to hold a press conference to condemn Dabrésil’s arrest.

“They locked the gates,” Morin said. “They said the minister didn’t give permission for us to enter.”

Instead the press conference took place on the street.

“We understand clearly that today, there is only one power— the executive power,” Morin said. “Now if someone gets arrested, it’s the executive doing the arrest and the executive who will execute judgment.”

Judge Wendell Coq, a member of the Supreme Court, also criticized Dabrésil’s arrest, calling it an attack on the court. She told Haiti’s daily, Le Nouvelliste, it was an “illegal, arbitrary, political arrest” and that he benefits from immunity from prosecution because of his position.

While Moïse remained in control Monday, experts said the question is what will happen next and can he hold on until February 2022.

Even if he does, a crisis seems unavoidable given Haiti’s history with contested elections, Fatton said. The last thing the Biden administration wants is a crisis in Haiti, given the political climate in Washington, he added, commenting that the U.S. is unlikely to do much unless Moïse finds himself in real trouble.

“I don’t see any fundamental change in American policy or the international community unless there is such massive protests that things degenerate and then they are compelled to do something,” Fatton said.

Meanwhile, Haiti’s opposition has been unable to speak as a unified coalition or mobilize citizens. The lack of large protests, say Haiti observers, is not because Haitians are tired of being locked in their homes as political turmoil fills the streets, as the State Department suggested, but because they are skeptical of both those in power and those in the opposition. Neither has brought real change to their lives.

“I don’t know if the popular protests are going to be strong enough so that Jovenel is compelled to exit, and if he exits, I assume you’re going to have the same old story,” the university professor said. “You’re going to have a U.N. contingent come back in Haiti for the year until there is a new election. The question is can Jovenel stay in power until next February.”