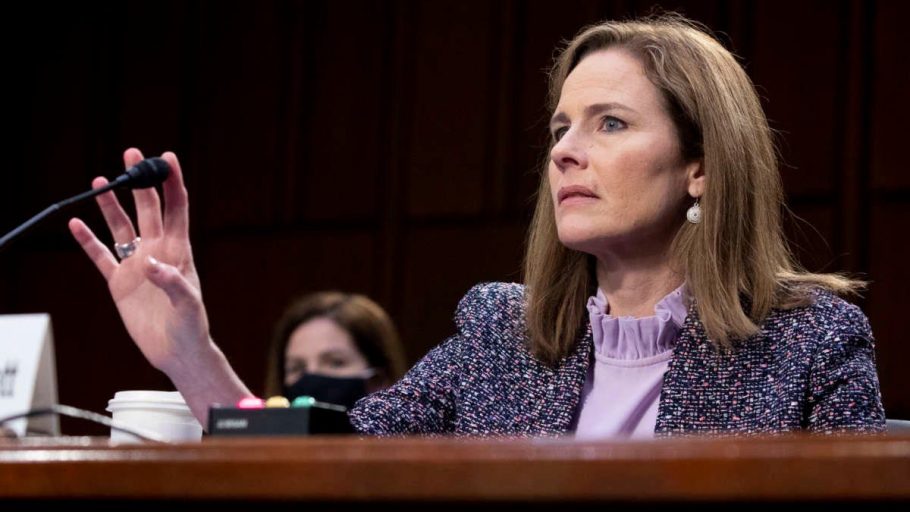 After four days of confirmation hearings, Black leaders of five major civil rights organizations are lining up in opposition to the nomination of Amy Coney Barrett to the Supreme court and the “deeply flawed” process Senate Republicans are using to secure her confirmation just weeks ahead of a contentious presidential election.

Testifying before the Senate Judiciary Committee on Thursday, Kristen Clarke, president of the National Lawyers’ Committee for Civil Rights Under the Law, said Barrett is “reluctant and unwilling” to recognize modern threats to voting rights faced by Black voters and people of color. Clarke said Barrett’s “originalist” judicial philosophy puts at risk important civil rights precedents such as Brown v. Board of Education, which found state-sanctioned racial segregation in public schools to be unconstitutional, and jeopardizes “bedrock” anti-discrimination protections under the Civil Rights Act of 1964.

“Her outlook is not a mainstream approach to the Constitution,” Clarke said. “It is one that leaves us stuck in a bygone era and invites a return to a racist past — not compatible with the modern era.”

“What we have heard over the past four days have only affirmed and indeed deepened our concern over Amy Coney Barrett,” said Sherrilyn Ifill, president and director-counsel of the NAACP Legal Defense and Educational Fund. (The group is independent from the NAACP and was founded in 1940 under the leadership of Thurgood Marshall, who went on to become the first Black justice to serve on the Supreme Court.)

Civil rights attorney Damon Hewitt said that, like Barrett, he was raised Catholic in the New Orleans area and attended Catholic schools. But today Hewitt is the executive vice president of the Lawyers’ Committee of Civil Rights Under the Law, and Barrett is a conservative judge. Hewitt, who is Black, said Barrett must have different “takeaways” from growing up in southern Louisiana, where Black people were enslaved, and where Black civil rights activists such as Homer Plessy challenged Jim Crow-era racial segregation all the way to the Supreme Court.

“As a son of the South, as a Black man in the United States, I understand that racism is real and it exists and it impacts people’s daily lives, but that is something that Judge Barrett in her jurisprudence certainly and in her evasive response to questions seems not to acknowledge, whatsoever,” Hewitt told reporters on Thursday.

Hewitt pointed to a Sen. Kamala Harris’s (D-California) exchange with Barrett during a confirmation hearing on Wednesday, when Harris asked whether Barrett agrees with Chief Justice John Roberts, who wrote that racial discrimination against voters “still exists” in a controversial 2013 ruling that gutted a crucial section of the Voting Rights Act. Barrett, who consistently dodged questions from Democrats by refusing to comment on specific legal cases, deflected and called voter discrimination a “very charged issue.”

Pressed by Harris, Barrett finally made a vague statement acknowledging that racial discrimination “still exists” in general. When asked by Sen. Amy Klobuchar (D-Minnesota) whether voter intimidation is illegal (intimidating voters is clearly illegal), Barrett said she could not “apply the law to a hypothetical set of facts.”

Hewitt said Barrett spoke as if racism is an “abstract principle,” but it’s not. Racism is the reason people of color and Black people in particularly face higher barriers to economic opportunity and health care, for example, which have contributed to higher rates of COVID-19 infections and deaths among people of color. Hewitt noted a 2019 ruling Barrett issued against a Black transportation employee in Illinois who reported workplace discrimination after his boss called him the n-word. Barrett called the slur an “egregious racial epithet,” but she and two other judges ruled the racist insult did not create a hostile work environment.

“Racism operates in context, but this nominee seems to not understand that,” Hewitt said. “Anyone with a conscious knows being called an n-word or any racial epithet does change your experience. But to this nominee it is as if discrimination and racism is in the abstract, it doesn’t matter how people experience it.”

If the right to vote is a “charged issue,” it’s because Trump and the Republican Party have wrapped the ballot in partisan dissonance. Before Trump took office, GOP-controlled state legislatures gerrymandered electoral districts along racial lines and passed voter ID laws and other ballot restrictions designed to suppress turnout among low-income and minority voters. Since losing the popular vote in 2016, Trump has perpetuated the myth that U.S. elections are mired by widespread voter fraud. Now down in the polls, Trump is attacking voting by mail and refuses to say whether he would accept the results of the upcoming election.

Trump has called efforts to expand mail-in voting due to the COVID-19 pandemic a Democratic “scam” and said Barrett must be confirmed because lawsuits contesting the results would likely end up before the Supreme Court. Democrats pushed Barrett to say she would recuse herself from hearing a case contesting the election results, arguing that Trump clearly expects her to rule in his favor. Barrett refused to commit to recusal.

If confirmed, Barrett would likely consider a major voting rights case out of Arizona that threatens to further erode the Voting Rights Act, according to Ifill. At issue are voting rules put in place by Republicans that disqualify provisional ballots cast outside designated precincts on Election Day and place strict limits on who can collect and deliver absentee ballots. Democrats argue low-income voters and voters of color are more likely to vote absentee, and thus the rules are intended to suppress their vote.

Democrats and civil rights groups are now calling on the Senate to wait until after the election to confirm a Supreme Court nominee so voters can have a say — Republicans blocked President Obama’s Supreme Court nominee for months ahead of the 2016 election — but the GOP’s Senate majority plans to vote on Barrett’s confirmation by October 22.

Civil rights attorneys argue that time frame is far too short for lawmakers to perform a rigorous review of Barrett’s record before confirming her to a lifetime appointment. Meanwhile, Congress has failed to pass a second relief package despite widespread hunger and economic pain caused by the pandemic.

“The absolute rush and haste to confirm Judge Barrett is part of a scheme to create a conservative supermajority in the Supreme Court that will overturn the will of the majority of Americans for many decades to come,” said National Urban League President Marc H. Morial.

At least 17 million voters have already cast their ballots. Reports of Black voters waiting in long lines at early polling locations have surfaced in Georgia and Ohio, two states where Republicans have purged rolls of thousands of voters and erected barriers to the ballot. Morial pointed to Texas, where three Trump-appointed judges on a federal appeals panel recently upheld an order from the state’s Republican governor limiting drop boxes for absentee ballots to one per county. County officials in Houston had planned on offering 12 boxes for the 2.4 million voters in Harris County, a massive area where 63 percent of residents are Black or Hispanic, according to The Guardian.

“If the Supreme Court sanctions this type of political manipulation, there is simply no limits on the rampant voter suppression that we can expect in November and beyond,” Morial said.