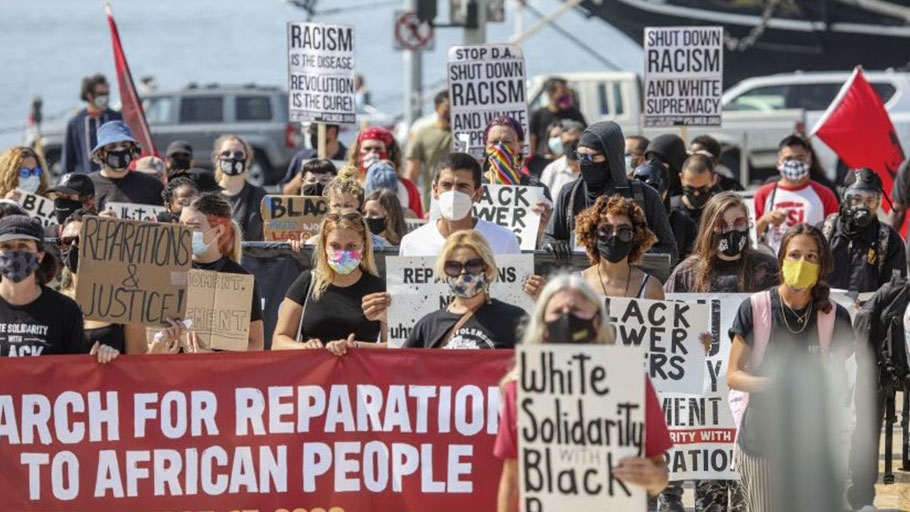 A group of roughly 100 protestors marched through downtown San Diego on Saturday demanding reparations for Black people to confront the lasting impact of America’s history of slavery.

Carrying signs that said “White Solidarity with Black Power” and chanting “U.S. Government you can’t hide/We charge you with genocide,” the group pushed for direct cash payments to all Black people because of unpaid slave labor. It comes as the idea of reparations, not a new concept for activists, has entered the mainstream.

Gov. Gavin Newsom signed an Assembly bill at the end of September to make California the first state government in the nation to adopt a law to study and develop proposals for potential reparations to descendants of slaves.

Saturday’s demonstration was organized by the Uhuru Solidarity Movement, a largely White group that is working under the leadership and direction of the African People’s Socialist Party. A belief of the group is that all White people benefit from the nation’s history of slavery and need to pay in some way. It says all White people — regardless of economic class, gender or religion — should give reparations.

Simultaneous demonstrations were held Saturday by the organization in Portland, St. Louis, New York, Boston and other cities.

“All White people, basically, sit on this pedestal of White power,” said organizer Wendy Craig, 59, of Encanto, at the Waterfront Park in downtown San Diego.

Craig, who is White, said the San Diego branch of the movement has been around for 10 years but has gone through periods of time when it is more active. She and other socialist activists at the event ultimately want a revolution from capitalism, but she said paying Black people is a good first step and a way to show solidarity for self-determination of Black people.

Democratic vice presidential candidate Sen. Kamala Harris has said she supports studying the idea of reparations and told National Public Radio it could possibly take the form of mental health treatment. However, the Uhuru movement is based on socialist ideals and has dismissed partisan politics as tools of the ruling class.

“It is not a charity stance,” Craig said of reparations. “It is based on stolen wealth.”

Some members Saturday said they did not want to speak to the press and deferred to Black people at the event to communicate the message. However, a group of Black men from the African People’s Socialist Party at the demonstration said they would not speak with the press.

There are various estimates by activists about how much money White people, or the U.S. government, should owe. A study from William Darity, professor of public policy at Duke University, and his wife Kirsten Mullen, calculated $2.6 trillion owed to decedents of slaves. That would be around $80,000 a person to the roughly 30 million descendants.

Darity’s often-cited work is a calculation of President Abraham Lincoln and Congress’ approval of former slaves getting 40 acres and a mule. The plan was rescinded by President Andrew Johnson shortly after Lincoln’s assassination. Darity’s reparation figure is based on compounding interest and inflation of the acres originally promised.

California’s new law, authored by Assemblymember Shirley Weber, D-San Diego, will create a task force to recommend remedies to the state Legislature and determine who is eligible to receive compensation. Reparations aren’t without precedent in the United States. In 1988, Congress paid $20,000 to each survivor of the Japanese American internment camps during World War II.

Claire Sparr, 27, of El Cajon, said she knows she wasn’t alive when slavery happened, but that didn’t mean she wasn’t taking action.

“I’m holding myself responsible for my race,” Sparr said, who is White, “and I think that is only fair.”

The Saturday demonstration also included a tent at Waterfront Park for giving out clothes and other supplies to the homeless. A 19-year-old activist from La Mesa, who goes by the name “Boogie,” said one of the reasons for the tent was showing that protests are not about looting or riots.

“We want to protect and provide for our community,” he said.

Featured Image: Marchers walk in downtown San Diego during the “March for Reparations to African People” which is a national day of political action coordinated by the Uhuru Solidarity Movement on Saturday, Oct. 17, 2020. Photo by Sandy Huffaker