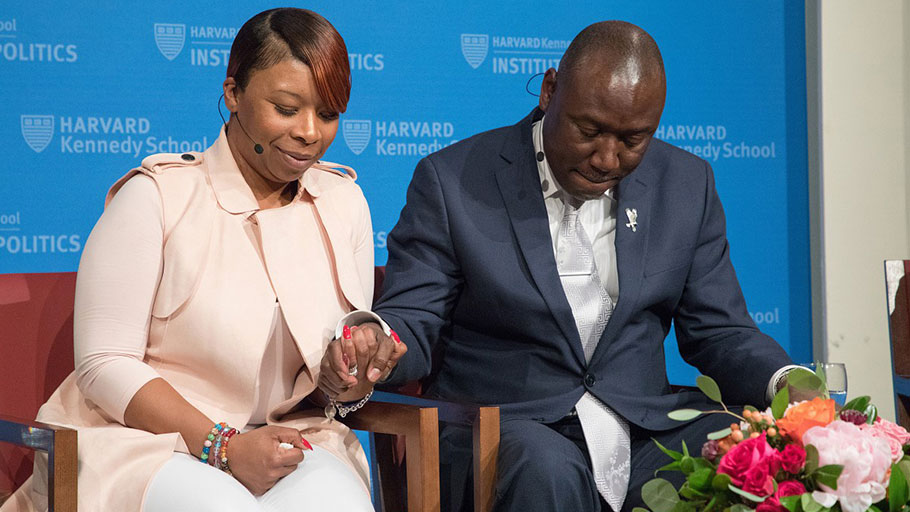 Black Lives Matter: A next chapter

Lezley McSpadden, mother of Michael Brown, prays with Benjamin Crump, attorney for the families of Brown, Trayvon Martin, and Stephon Clark, at the IOP’s forum on the Black Lives Matter movement four years after Brown’s slaying. Photo by Martha Stewart

Four years after Michael Brown was shot to death by a police officer in Ferguson, Mo., young people of color are still dying. Still, as a panel discussion at the John F. Kennedy Jr. Forum noted on Monday, a movement has grown at the same time.

With a new documentary shedding light on Brown’s life and the subsequent Black Lives Matter movement, the national focus has turned to basic human and Civil Rights issues broached by his death — and the killings of Trayvon Martin, Stephon Clark, Philando Castile, and others — that society is being called on to tackle.

The discussion was moderated by Khalil Muhammad, professor of history, race, and public policy at the Kennedy School (HKS), and Ashley Spillane, Roy and Lila Ash Student Fellow, Ash Center for Democratic Governance and Innovation, which co-sponsored the event with the HKS Black Student Union, HKS Arts and Culture Caucus, and the IOP’s Politics of Race and Ethnicity program.

The documentary, explained Pollock, began when he moved to Ferguson after hearing what had happened to Brown. Coming from Los Angeles, he said, “I didn’t see anyone talking about the case of Mike Brown, and that felt like the most important thing.”

Once he began to work on the film in 2013, its story deepened. “We wanted to show more of the context of what was happening in Ferguson,” said Pollack. “We talked a lot about the city of St. Louis,” where the so-called “race riots” of 1917 resulted in the deaths of more than 40 people of color, and possibly many more.

“Our country was built on genocide and slavery,” he said.

Reed said the film “did an incredible job of bringing you critical evidence of evidence that was concealed from the general public.”

“We are hoping it will change the hearts of people,” said McSpadden. 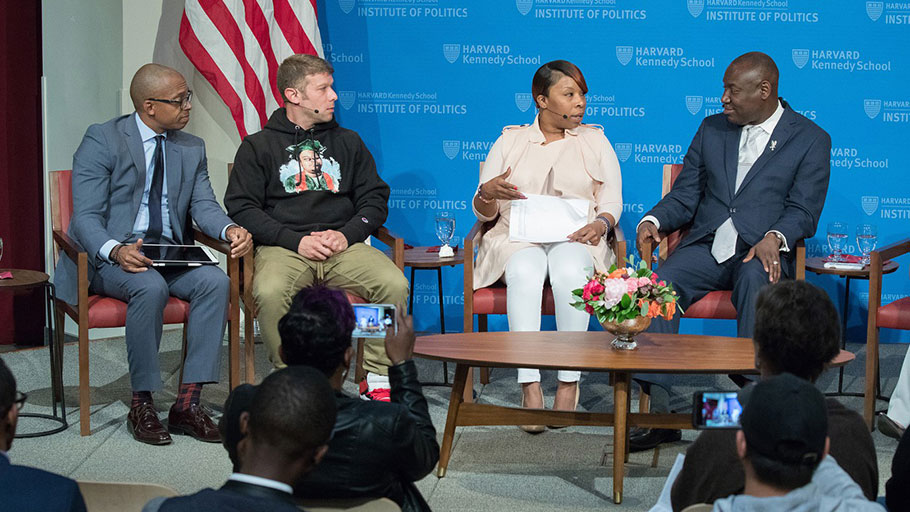 Available on iTunes and video on demand on cable, “Stranger Fruit” will make its television debut on the Starz network on June 18. Pollock is also bringing it to various film festivals and is looking for a wider commercial release. A portion of the proceeds go to supporting Brown’s family.

At the heart of Brown’s case, the panel agreed, is racism. Pollock’s film explores the history of this prejudice and points out the discrepancies in the evidence and treatment of this particular case.

Crump stressed the importance of discerning the pattern in this treatment. To highlight the racism inherent in what he called all the “hashtags” since Brown, Crump pointed out the difference between these cases and the recent ones of the Parkland and Waffle House shooters, in which white suspects were apprehended alive.

“White murderers are given more consideration than black unarmed men,” he said.

To tackle these issues, Rand said the best way forward is a multidisciplinary approach.

“We’re here because being an attorney is not enough,” Rand said. “That’s why we’re in the courtroom. That’s why Jason had to make his documentary. That’s why you’re here at the University.”

Crump directed concerned citizens to the ballot box, noting that it is up to legal officials to get indictments in such cases. “We have to hold these people accountable,” he said.

After McSpadden announced to applause that she was considering running for the Ferguson city council, she discussed her own goals of enlightening and giving comfort.

“I’ll never get over what happened to my son,” she said. “If I can make a difference, if I can help another mother, and share with them this journey, I feel a little bit better inside.”