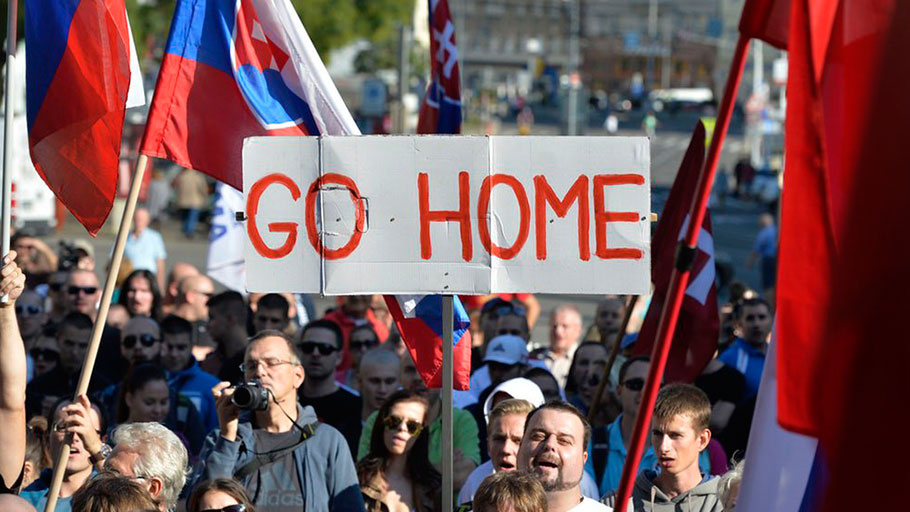 Ian Bremmer sees Trump’s victory, the rise of the far-right in Europe, and more as a backlash to globalism—and he thinks it’s going to get worse.

Shortly after Donald Trump was elected, Steve Bannon, the architect of the unexpected victory, told The Hollywood Reporter that “the globalists gutted the American working class and created a middle class in Asia.” The last few years have seen the rise of an anti-establishment, anti-immigration politics in many Western countries. Brexit, Trump, and the new far-right strength in Europe have all been interpreted as part of this trend.

In his new book Us vs. Them: The Failure of Globalism, political scientist Ian Bremmer surveys the backlash to globalism. As president of risk consultancy firm the Eurasia Group and a foreign policy pundit writing for Time, Bremmer believes the criticism of globalization on both the left and right is largely correct. “Globalism—the belief that the interdependence that created globalization is a good thing—is indeed the ideology of the elite.” That ideology, he believes, has failed. The policies pushed by globalists have exacerbated inequality and social upheaval in developed countries, producing a ferocious backlash. And he thinks the problem is only going to get worse.

Let’s start with your path to this book. As you make clear, you’re a beneficiary of globalism, someone from a more modest background who has risen in the world and enjoyed the economic benefits of the last few decades. So it’s a bit surprising that you’ve come to conclude that many of the varied critics of globalism (from Bannon to Sanders) are right, at least in some of their critique.

How did you come to that conclusion? Did you pay attention to the anti-globalist arguments of the 1990s (as in the Seattle protests of 1999?) Or was it more the events of the last few years?

I think my view on how “average Americans” weren’t getting opportunities has evolved over time.

The economic piece was something I was aware of pretty early—absent any role models among elites or “network” it was pretty clear how much harder it was to break in. I got a full scholarship at Tulane, and it was almost a big mistake—my professors didn’t have connections to help me get into top graduate schools, the top firms weren’t interviewing at the job fairs. It’s only gotten more challenging for the working class in the last decades. So I’ve pretty consistently felt that the “American dream” was somewhat inaccessible even if you were smart and hard working.

I was also very conscious of the shifting image of America as global policeman. My father fought in Korea. It was pretty clear that Iraq and Afghanistan were very different wars, and our soldiers coming back were treated very differently.

I wasn’t as focused on the culture piece of the fight until later. My grandmother came over from Syria, an Armenian and Syrian christian, to Ellis Island—and the idea that we welcomed all those immigrants is pretty core to my personal identity. I mostly ignored those challenges to that idea at home until the refugee crisis hit Europe, and we saw how little the Obama administration was prepared to do to help, as well the extent of the political backlash in Europe.

Then there’s the technology issue, which is legitimately new. The divisive role of social media as well as the broader social implications of the “fourth industrial revolution” (which may turn out to be nothing of the sort) are both creatures of the last five years.

Put them all together and the conclusion stares you in the face. It’s over-determined. Globalism as a dominant ideology of the west has failed a majority of its citizens.

You’re not just saying globalism has failed. You are also saying that the populist backlash in American and Europe (Trump, Brexit, various movements in other countries) is a backlash to globalism, right?

Correct. (Although, to be clear, globalism is working exceptionally well for the globalists.)

The populist backlash in the U.S. and across the entirety of Europe is a backlash to globalism, and it’s only set to intensify (and expand beyond the U.S. and Europe) over the coming years, making “us vs them”—the conflict between the winners and losers in this emerging world order—a fundamental challenge to the liberal democratic model.

Why do you think backlash is only going to intensify? Some argue we’ve hit the peak of the populist tide, which will now recede. You disagree.

Mostly because none of the problems that these people are experiencing are being addressed. The fact that populism is this strong with economic growth more robust than we’ve seen it in over a decade really makes you worry about what is going to happen when we hit a recession (and, say, the bills on all that deficit spending come due).

But it’s the technology piece I’m most concerned about.

So on the “technology piece,” which those who haven’t read the book might not be understanding right now: You think automation, robots, and artificial intelligence will feed into populist backlash. Why?

Because the displacement of jobs is so much greater—and faster—than with previous industrial revolutions. Lots of wealth will be generated with larger numbers of people that don’t have the skills to participate. And governments don’t seem eager to address this challenge.

At the same time, a data revolution that empowers institutions that can aggregate and filter information about people, leading to greater polarization and deeper divisions among those who now only read and engage online with people they “like.” This undermines the civic nationalism that brought western nations together.

Globalism’s champions—or apologists, depending on your view—argue that even if it’s experiencing a backlash in the U.S. and Europe right now, it’s been a great success in poorer nations like China and (to a lesser degree) India, which have built substantial middle classes. But you argue the anti-globalist backlash will now hit China, India, and many other nations. Can you explain why you think that?

Many of the jobs that China and India have benefited from as a result of cheap labor will now move to automation. The data revolution, with its accompanying intensification of divisions in society, will also play out. We are already seeing this with elections in Brazil and Mexico this year, with wealthier middle classes railing against the corruption and lack of infrastructure and public services provided by the governments. They trust social media more than traditional channels—so they’re more willing to look to non-traditional candidates.

China may well prove the exception, because their political (rather than commercial) control of data allows the country to enforce more political homogenization. Plus, state capitalism means the government can ensure the overemployment of otherwise inefficient labor.

I want to wrap this up with some thoughts about the future. As you suggest, China’s centralized political system might be able to weather some of the coming problems. I wonder, though, about how liberal democracies will fare. One option, as you suggest in the chapter called “Walls,” is to adopt various barriers (protectionism, immigration restriction, etc.). That doesn’t seem very appealing. The other alternative, as outlined in the chapter “New Deals,” is to rework the social contract. What plausible solutions exist to solve the damage done by globalism without getting rid of the benefits?

This is my biggest concern and the main reason I wrote the book. This tension is a chronic condition for liberal democracies. In the near term, we’re going to see a lot more walls.

Responding more sustainably and constructively means more people with influence and resources starting experiments to invest in those that are otherwise on the wrong side of those walls. Education is a big piece of this—getting people early and staying with them over their entire lives. Infrastructure investments, too. Efforts to craft policies to support more flexible gig economies. We’re starting to see some of this in American cities (and in Scandinavia, Canada, Singapore) where CEOs and universities have invested in individual projects.

This is like early-stage responses to climate change: the challenge is obvious and feels almost overwhelmingly big, but we don’t yet know what the answers are. We have to be honest about that—and get to work.

Jeet Heer is a staff writer at the The New Republic.