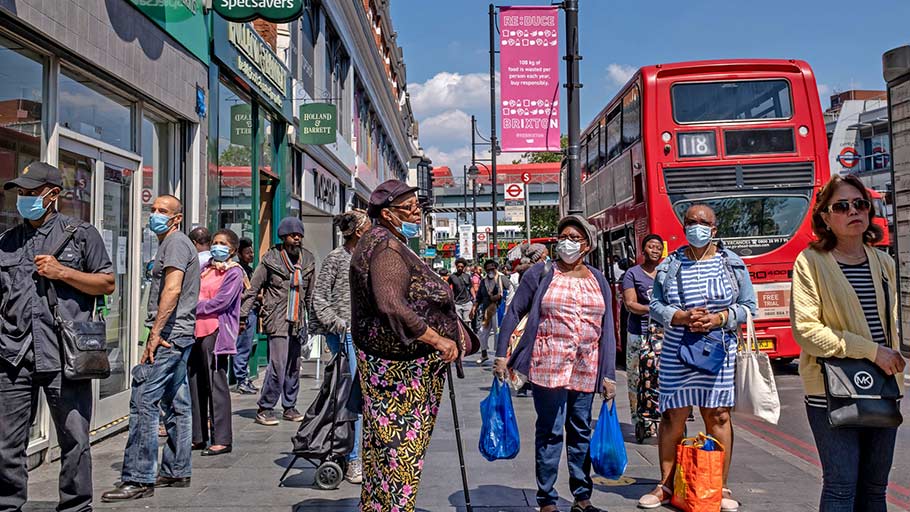 Britain’s Ethnic Minorities Are Being Left for Dead

You Are Here: Home » Blog » News & Current Affairs » Britain’s Ethnic Minorities Are Being Left for Dead

Shoppers on Brixton High Street in South London. As in the United States, ethnic minorities are disproportionately falling victim to the pandemic. Photo by Andrew Testa, NYT

The government could have predicted, and perhaps prevented, many deaths. It did not.

In early April, Maruthalingam Thiyakumar, a 58-year-old employee of the corner shop in my neighborhood in South London, died from the coronavirus.

While some of my neighbors and I were able to follow Prime Minister Boris Johnson’s injunction to “stay at home” and “save lives,” Mr. Thiyakumar continued to provide toilet paper and tea bags to the anxious customers who crowded the tiny shop where he had worked for 20 years. The government had designated him a “key worker” but failed to give him personal protective equipment. He was exposed to a deadly virus and left to fend for himself.

Mr. Thiyakumar’s fate is tragic — and typical. The pandemic may affect us all, but its effects are not equal. In Britain, which has the highest death toll from the coronavirus after the United States, they are unfolding to reveal a gross inequality. As in America, ethnic minorities — exposed at work and subject to social neglect — are disproportionately falling victim. And the government is doing little to stop it.

The ethnic divides in the data are stark. In England and Wales, according to a recent report, black people are nearly twice as likely to die of the coronavirus as white people, while Indians, Bangladeshis and Pakistanis are also at a significantly higher risk. Thirty-three percent of critically ill coronavirus patients are from ethnic minorities, another study found. Given that ethnic minorities make up only 19.5 percent of the population and are on average younger than white Britons, the figures are damning.

But not necessarily surprising. As we know, underprivileged people are much more likely to contract the virus. And in Britain, people of color have, on average, a lower standard of living than whites. The pandemic’s disproportionate toll was foreseeable. The government could have predicted, and perhaps prevented, many deaths. It did not.

Take housing. Ethnic minorities are more likely to rent and less likely to live in households where social distancing is possible. Two percent of white British households live in overcrowded conditions; this figure is 30 percent for Bangladeshis.

These groups are also more likely to live in economically deprived urban areas. Newham, the borough with the highest death rate in London, and Birmingham, which has one of the highest death rates in the country, have large ethnic minority populations and above average poverty and pollution. Densely packed into impoverished neighborhoods, many of Britain’s ethnic minorities are in effect primed to suffer most in this pandemic.

Ethnic minorities are overexposed on the job as well. Not only do they directly deal with the ill — Indian men are 150 percent more likely to work in health or social care than their white counterparts — they are heavily represented in “key worker” roles dealing directly with the public, in corner shops, the postal service and waste disposal.

What’s more, many work in the parts of the service industry — as hospitality staff, taxi drivers and food workers — that have been worst affected by the lockdown. Black African and black Caribbean men, for example, are 50 percent more likely than white British men to be in shutdown sectors. As the government eases restrictions, some, out of economic necessity, may rush back to work, endangering themselves anew. Others won’t even have that opportunity. Inadequately supported by the government’s measures, they will suffer financial distress.

Culture is a factor, too. One reason for overcrowding is a preference for multigenerational families, which puts elderly relatives at risk and intensifies the spread of the virus. Low English proficiency makes it difficult for some to use emergency hotlines. And those with uncertain immigration status may even refuse to go to the hospital, out of the understandable fear of being caught in the government’s cruel system of detention and deportation.

It should be no surprise, then, that ethnic minorities are prone to heart disease, hypertension and diabetes — making them all the more vulnerable to developing dangerous cases of Covid-19. More shocking, perhaps, is that patients of color are less likely to receive attentive care from health professionals. 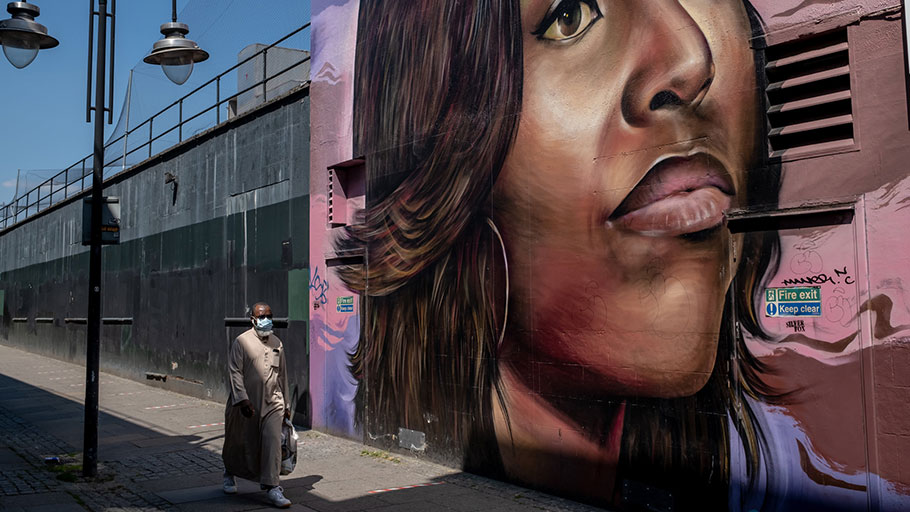 People of color from neighborhoods like Brixton, South London, are not only more likely to become infected and severely ill, they also receive a lower standard of treatment. Credit: Andrew Testa for The New York Times

Before the pandemic, black women were five times more likely to die from complications around pregnancy and childbirth than white women. During the pandemic, that inequality is present, too: Ethnic minority women who are pregnant, a study found, are four times more likely to be hospitalized with the coronavirus than white women, showing that preventive care at an earlier stage is lacking. So not only are people of color more likely to become infected and severely ill, they also receive a lower standard of treatment.

Nowhere is this differential approach clearer than within the National Health Service. It is heavily reliant on the skills of ethnic minorities, many of whom are immigrants: 20.7 percent of N.H.S. workers hail from an ethnic minority. And they account for a staggering proportion of deaths from Covid-19 in the service — 94 percent of doctors, 76 percent of nurses, and more than half of all health care support workers. In a survey of ethnic minority health workers last week, 50 percent felt that “discriminatory behavior” lay behind the decision to deploy them to the most at-risk, front-line roles.

Despite the proven vulnerability of people of color, the government is conducting only a broad review of the situation. But then, it is of a piece with Brexit, the Windrush scandal and the “hostile environment” policy, all of which have targeted immigrants and made foreigners out of British nationals.

On Thursday, the government agreed to scrap an annual surcharge of 400 pounds, or $489 — set to rise to 624 pounds, or $763, in October — that health care workers from outside most European countries must pay to use the N.H.S. The gesture provides some relief. But it has much more to do with averting a revolt within the ranks of the Conservative Party than with addressing the inequalities faced by ethnic minorities.

As if to prove the point, this week the House of Commons voted through an immigration bill that aims to keep out low-wage, supposedly “unskilled” workers. These are the same people whose commitment and diligence have saved countless lives in recent months. The government should be thanking them, not penalizing them.

Instead, it has sent out a clear message: The work of ethnic minorities may be essential. But their lives are expendable.