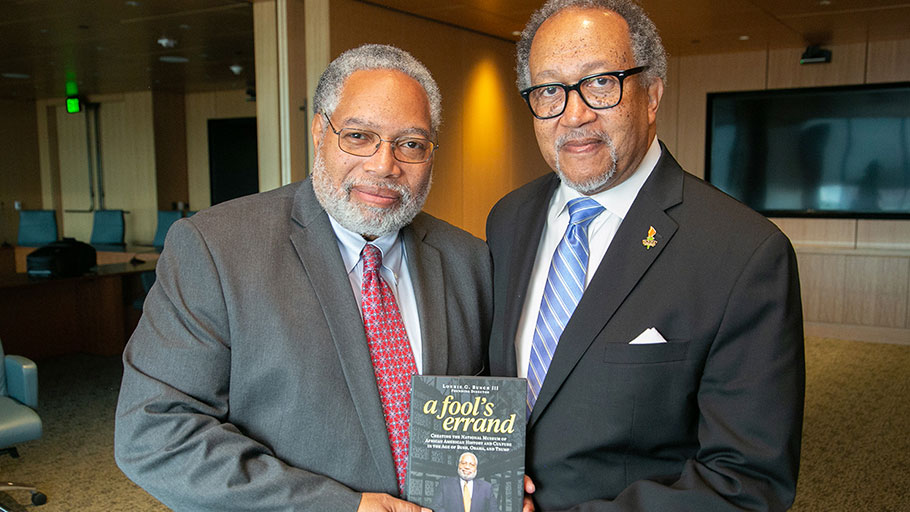 The two discussed Bunch’s timely new book, “A Fool’s Errand: Creating the National Museum of African American History and Culture in the Age of Bush, Obama, and Trump.”

“I [initially] saw this journey to build a museum that could help bridge the chasms that divide us as a ‘fool’s’ errand,’” Dr. Bunch said.

The book outlines the multitude of challenges Bunch faced when pursuing the construction of the historical museum.

Those challenges included choosing the location; architect; design team; and the collection of unique pieces of African American artifacts.

He added that the museum was “an errand worthy of the burdens.”

Available from Smithsonian Books on the organization’s website and at Amazon.com, “A Fool’s Errand” is a tour de force of Bunch’s personal and political accomplishments.

During the intimate video-taped interview inside the National Museum of African American History and Culture, the two visionaries also tackled topics that ranged from the Transatlantic Slave Trade, their shared North Carolina families’ histories, the writing legacy of author James Baldwin, and the contemporary vitality of the Black Press of America.

“The relevance and inclusion of the Black Press in events such as this one, show the continued significance of the Black Press,” NNPA Chair Karen Carter Richards, said after the interview between Chavis and Bunch.

“The Black Press is alive and well, and we will continue to be the daily recorders of our history across the globe. Although we’ve seen many changes within our industry; these changes are bringing better opportunities for the Black Press,” Richards said.

“So, we are honored that Dr. Lonnie Bunch has chosen to include us as a part of this important national media event,” she said.

While in graduate school, Bunch desired to write a dissertation about the Black Press, he said.

However, naysayers told him the Black Press was unimportant.

He said that theory quickly was proven wrong.

“What I love about the Black Press today is that it’s a place that reminds people of the power of the African American community… the Black Press is critically important.

“What [The Black Press] does is it reminds us that there are many different lenses to understand a story. If you don’t have the lens to the African American community, where are you going to find your story? For me, the Black Press is crucial not for the past, but for the future,” Bunch said.

The Smithsonian national leader also marveled over the enduring legacy of Baldwin, whose works explored racial, sexual, and class distinctions in North America.

“As a 17-year-old freshman at Howard, the first book I picked up was ‘Go Tell It on the Mountain,’” Bunch said.

“I was so moved by [Baldwin’s] writings. I read everything that he wrote because, in some ways, what Baldwin did is that he captured the trueness of the community in an unvarnished way. He also inspired us to demand fairness,” he said.

Bunch said he sought out to obtain a building that would reference the spirituality, resilience, and hope that have been key elements within the African American community.

Elements he said that have shaped America’s identity in ways most Americans do not understand.

He said the revolution in South Africa reinforced his belief that history is an effective tool to change a country by embracing the truth of a painful past.

The museum opened three years ago to much fanfare, with former presidents Barack Obama and George W. Bush, among others, in attendance.

“To some, visiting the museum allows them to find hope … that the current poisonous political partisanship and racial antipathy will one day be overcome,” Bunch said.

A historian, author, educator, and curator, Bunch has enjoyed a career of near unapparelled success.

Bunch was elected in 2017 to become a member of the American Academy of Arts and Sciences.

Earlier this year, Bunch was appointed Secretary of the Smithsonian Institution, the first African American to hold that position in the organization’s 173-year history.

Now, with “A Fool’s Errand,” Bunch said he has a simple message to convey.

“You can’t understand yourself or the future without looking back. History is an amazing tool to live your life. More than anything else, it challenges you to be accurate,”

Watch the full interview between Dr. Chavis and Dr. Bunch at BlackPressUSA.com.