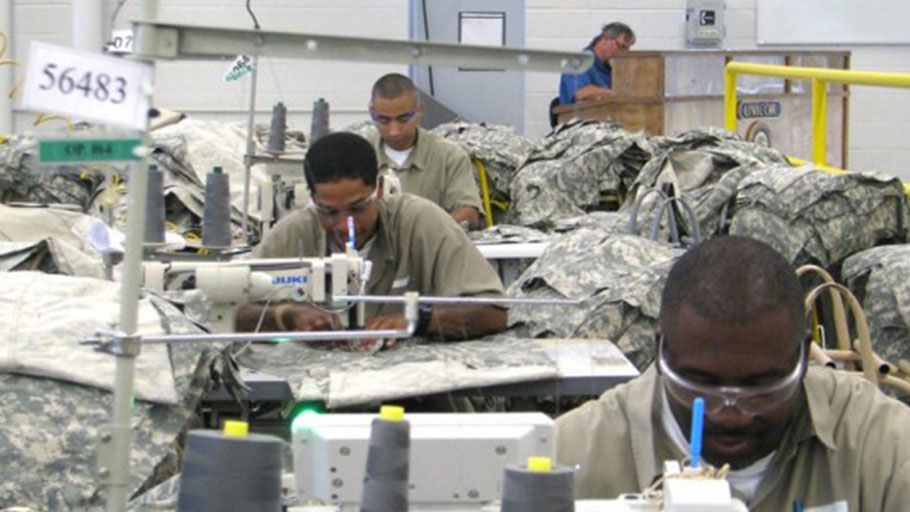 Prisoners have made furniture, license plates and government uniforms during the pandemic. In a factory, social distancing is almost impossible.

As the coronavirus spread across the country, Patrick Jones kept reporting to his job in the textile factory at the federal prison in Oakdale, Louisiana.

He’d worked there for years, sewing tidy buttonholes on government uniforms. Though the highly contagious virus was creeping into prisons by mid-March, Jones and his fellow inmates were working without masks, according to interviews with family and prisoners who knew him. He collapsed on March 19 and was taken to a hospital. About a week later, he died from COVID-19.

Shortly after his death, the pandemic’s first in a federal Bureau of Prisons facility, the agency announced a nationwide 14-day “lockdown,” saying inmates would be mostly kept in their cells to decrease the spread of the virus.

But prisoners in several locations were still reporting to work at Unicor, a federal program that runs prison factories, as the number of infections grew and those stricter rules were announced, The Marshall Project learned through interviews with dozens of prisoners, their families and correctional officers. Some factories were still running this week.

They said factories operating deep into March as the pandemic spread were making office furniture in Florida and stamping and shipping license plates in Maryland, which some prisoners and relatives criticized as non-essential functions.

Some textile factories remain open still, though they have turned to making face masks, according to workers and their relatives. But some of the prisoners at those jobs said they did not get their first paper face masks until this week, as did the correctional officers who supervise them.

Running the factories left many prisoners unable to keep social distance, and risked spreading the virus around a prison or infecting people from outside the prison who do business with the factories. The practice also appears to go against special guidelines the CDC issued March 23 to help prevent the spread of COVID-19 behind bars.

Bureau of Prison officials did not respond to detailed questions about the assertions the prisoners and their families made, which Unicor facilities were still running and what kind of safety precautions were being taken for workers.

Jeff Ormsby, a union leader for state prison employees in Texas who spent 25 years working for the Bureau of Prisons, including as a Unicor supervisor, said letting some factories run as long as they did seemed irresponsible.

“I’m real big on Unicor, but they need to shut it down during this,” he said, calling for a complete lockdown of the factories, except those making masks.

“It’s a factory, social distancing is almost impossible in there as well—it’s no different (than) inmates working on the rec yard or the dining hall,” he said.

To be sure, a number of Unicor prison factories have been shut down. Plants stopped running last week in federal facilities in Michigan, Texas and New Jersey, according to family members of the prisoners who work there. And producing masks to help protect others from COVID-19 is an admirable use of the textile factory workers’ skills, their families said. But they worry that their relatives are not being properly protected while making them.

Unicor, historically called Federal Prison Industries, is a nearly 90-year-old program to employ the incarcerated in more than 50 factories that made $531 million in sales last year, according to its annual report. The program’s goal is “to reduce undesirable inmate idleness” and provide prisoners jobs skills. Unicor pays for its operations from sales of its products and services, not using taxpayer dollars.

It’s a big business, employing more than 17,000 prisoners who earn between 23 cents and $1.15 per hour for their work, making it one of the better paying gigs behind bars.

When bureau officials announced the two-week lockdown, starting April 1, they said group gatherings would be limited “to the extent practical to facilitate commissary, laundry, showers, telephone” and access to some computers.

Several factories across the country were operating in late March, and some even past the lockdown announcement, said the prisoners, families and guards.

At the Cumberland federal prison in western Maryland, dozens of men who make license plates in a Unicor factory worked until last week, according to a prisoner who asked to remain anonymous, and Naomi Mekeel, whose fiancé, Nicholas Gaworski, works at the factory. They said workers were told April 6 that someone at the factory had tested positive for COVID-19, so many of the workers are now in quarantine. But they said other workers were still going to the factory this week, apparently to ship orders.

“What is the urgency in shipping license plates and putting the entire camp at risk? Who’s even worrying about their license plates right now?” asked one of the prisoners in an email to The Marshall Project.

Several relatives of prisoners who work at Unicor’s factory in the Coleman women’s facility in central Florida, said their family members were still working earlier this week. The factory normally makes furniture, according to Unicor’s promotional materials, though it was unclear if that remained the case or if the factory was still running Thursday. Some relatives said prisoners feared that if they did not report for work they risked losing sought-after work assignments. Families said they are concerned that the work made quarantine or social distancing impossible. On Thursday, officials reported the first COVID-19 case there: a staff member at the low-security unit.

Several prisoners and relatives said work is still going this week at textile factories in Terre Haute, Indiana; Jesup, Georgia; and Waseca, Minnesota. They said the factory in Waseca, which normally makes Navy and Air Force uniforms, and the plant at Jesup are now making face masks and protective gowns. At Terre Haute and Jesup, officials have also reduced the number of prisoners working at any given time—from about 200 to about 35 at Terre Haute, the prisoners and families said.

It was not clear if Terre Haute has also switched to making masks, or whether the Unicor-made masks will be used for prisoners and officers across the nation, or shipped to shield workers at other federal agencies.

At Oakdale, the Louisiana prison where Jones and four other men have died from the virus, several prisoners and their families told us the Unicor workers are now housed in a separate facility that is under quarantine. There are so many cases inside the prison that officials have stopped testing. Those interviewed there did not know if the Unicor factory was still running.

Prison labor expert Heather Ann Thompson said prison factories are unsafe in the best of times, with incarcerated people getting no workman’s compensation if they are injured. Thompson, who wrote a Pulitzer Prize-winning book about the 1971 Attica prison riots, said prisoners typically can’t miss work for illness without facing discipline, and they cannot elect to skip work for fear of exposure to the virus.

“Working conditions (in prisons) are always terrible and super-oppressive,” she said. “You add onto that the possibility of disease and you realize that those things that are already bad become worse.”

Not all prisoners feel that way. Paula Pates said her 31-year-old son, Jonathan Pates, works at the Unicor furniture factory on the men’s side of the Coleman federal prison and is upset that his unit went on lockdown last week, preventing him from continuing to work building office cubicles. He’s worked his way up to $1.02 per hour—a good wage in prison—and is worried about losing his position and salary if he can’t show up.

Prisoners and their families told The Marshall Project that most people at federal prisons did not start to receive masks until about April 2, and some were not getting them until earlier this week—even as COVID-19 cases in federal prisons have spread so far that the government started using a nationwide map to document them.

Mekeel, the fiancée of the Unicor worker at the Maryland prison, said that as the threat of the virus grew, workers at her fiancé’s license plate factory got so desperate they tried to forge face shields made out of materials in the plant.

They didn’t get paper face masks until this Monday, she and several others said.

This article was originally published by The Marshall Project.

Cary Aspinwall is a Dallas-based staff writer for The Marshall Project. Previously, she was an investigative reporter at The Dallas Morning News, where she reported on the impact of pre-trial incarceration and money bail on women and children in Texas and deaths in police custody involving excessive force and medical negligence. She won the Gerald Loeb Award for reporting on a Texas company’s history of deadly natural gas explosions and is a past Pulitzer finalist for her work exposing flaws in Oklahoma’s execution process.

Keri Blakinger is a staff writer whose work has focused on prisons and prosecutors. She previously covered criminal justice for Houston Chronicle, and her work has appeared in the Washington Post Magazine, VICE, the New York Daily News and NBC News. She is the organization’s first formerly incarcerated reporter.

Joseph Neff is a staff writer who has investigated wrongful convictions, prosecutorial and police misconduct, probation, cash bail and forensic ‘science’. He was a Pulitzer finalist and has won the RFK, MOLLY, SPJ’s Sigma Delta Chi, Gerald Loeb, Michael Kelly and other awards. He previously worked at The News & Observer (Raleigh) and The Associated Press.