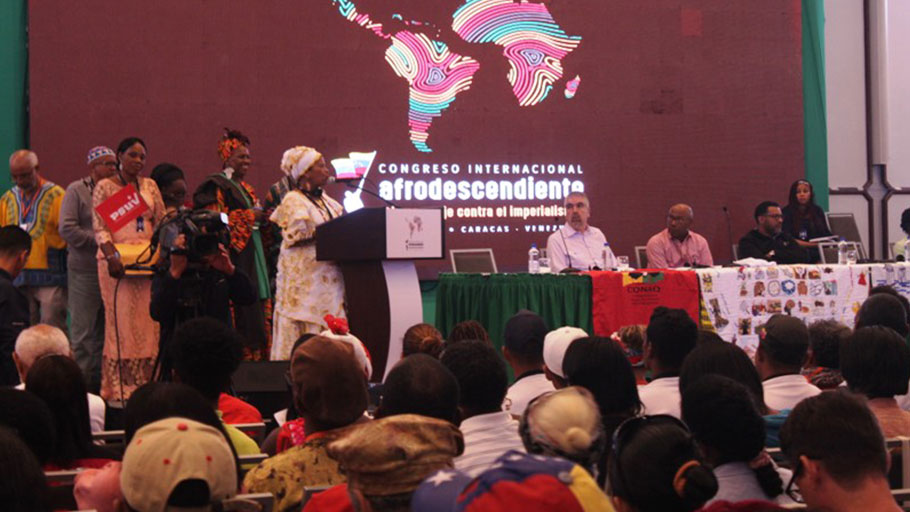 The following was approved by the Afro-descendant International Congress, in the City of Caracas, Cradle of the Liberator Simón Bolívar and Capital of the Bolivarian Republic of Venezuela on November 12, 2019.

We, Afro-descendants of Our America, and Africans, gathered in the city of Caracas, capital of the Bolivarian Republic of Venezuela, on the occasion of the Afro-descendant International Congress, in accordance with what was agreed in the framework of the 25th Meeting of the Sao Paulo Forum and in the framework of the commemoration of the 248th anniversary of the assassination of the Afro-Venezuelan Cimarron “Guillermo Ribas”, leader of the Cumbe de Ocoyta (1768 – 1771), self-government that put in check the colonial power of the time, after the deliberations carried out we have arrived at the following conclusions:

The conquest and colonization of America, a continent so called by the European invaders, constitutes a founding historical fact of the current international order and of the power relations that impact societies until these days. The unjust international order emerging since the aftermath of the 15th century, characterized by an unequal economic-trade system that had its epicenter in Western Europe, was erected on the extermination, subjugation and spoliation of the original peoples of Americas and of the African population. Undoubtedly, the history of humanity does not record in its annals, genocide of such dimensions. This was recognized by the “3rd World Conference against Racism and Racial Discrimination” held in Durban, South Africa in 2001.

The colonial world-system was marked by an inhuman trafficking of people from Africa to America in order to invigorate the economic-productive apparatus at the service of Western powers. This required a colonial rationality that would “legitimize” such economic-social practices, thus giving rise to the concept of race as an invention conducive to perpetuating Western predominance over other peoples. Racial segregation seeks to protect a civilizing model created for the systematic exploitation of peoples and the plundering of their natural wealth. Consequently, ever since, racism has become an inherent element of modernity.

Today’s neoliberal globalization is the continuation of modernity stemming from the European invasion of America. This model not only reinforces exploitation, but also deepens it while imposing a cultural homogenization that does not know the history of peoples, their traditions and their identity.

Neoliberalism, through the cultural industry of capitalism, perpetrates a memoricide against the peoples of the world, which is aimed at “justifying” the plundering of peoples’ wealth, the subjugation of women and domination over Afrodescendant people based on the alleged superiority of some over others. It is a model that endorses a conception of life that deepens the separation between human beings and nature. It is an instrumental rationality of nature that condemns it to destruction for the sake of a developmental and extractivist model.

This Eurocentric colonialist logic that threatens biodiversity arises from a secularization that puts material prosperity at the forefront of life. Neoliberalism is part of a global domination project that seeks to perpetuate the colonial model of power synthesized in U.S. hegemony.

Faced with the emergence of new poles of political and economic power such as Russia, China, Iran and India, the West with the U.S. at its head, it clings to the application of neocolonial policies supported by powerful financial, communicational and cultural transnationals at the service of neoliberalism.

However, given the changes resulting from the emergence of a multicentric and multi-polar world, U.S. imperialism has escalated into a global offensive aimed at preserving its supremacy and the perpetuity of the neoliberal model. Forty years after the Washington Consensus, imperialism, led by a corporate state, continues in its hegemonic eagerness to impose the rules of savage capitalism through neoliberalism, for which it relies on the follow up of European governments that in turn operate with the same pretensions in Asia, Africa and the Caribbean.

In Our America, the offensive of U.S. elites and their allies seeks to end the cycle of progressive governments to impose neo-colonial relations in the so-called “national interest” of the United States. Coups d’état, political violence, unilateral coercive measures, economicfinancial blockade, threats of military intervention, military bases and diplomatic pressures have been some of the tactics of the Doctrine of Non-Conventional War implemented against the peoples of Latin America and the Caribbean. This has led, thanks to the racism inherent in this doctrine, to the displacement of Afrodescendant populations, racial extermination, increased xenophobia, racial discrimination in the justice system, trafficking in persons and hate crimes, among other consequences.

In the cycle of progressive governments, the struggle for peace, national sovereignty, selfdetermination of peoples and the battle for the rights of the people’s sectors were enhanced. At this stage, thanks to the organized action of Afrodescendant people, the denunciation of the genocide committed by Europe was placed, the struggle to overcome structural racism was intensified, and with the support of progressive Governments, the right call for reparations for women and Afrodescendant people, derived from slavery and colonialism, has been brought to various multilateral bodies.

Afrodescendants have played a key role in building the independence of the peoples of Our America, as well as in the ongoing struggle for the full liberation and profound transformation of our peoples. Likewise, its prominence was important in the constitution of the pan-africanist movement, which from the Island Caribbean was projected to the U.S., Europe, and Africa in the first international advances of a decolonial proposal and of the entrenchment of the most basic freedoms of men, women and peoples of the world.

Once again, Afrodescendants are uniting with social movements, left-wing political parties, and progressive currents and together with sovereign governments that do not give in to imperialist pretensions, are changing the correlation of classes and social forces in our American continent. The irreducible resistance of the progressive governments, the popular insurrections in Haiti, Ecuador and Chile, as well as the electoral results in Bolivia, Argentina, Colombia and Uruguay, account for the failure of the neoliberal model, express the generalized rejection of that model and the neo-colonial policies of the United States for the region.

A particular mention should be made of the anti-imperialist resistance and offensive of the people of Venezuela. It is well known that the multiple attacks of the American imperialism against the Bolivarian Revolution are aimed at undermining the hope created by Commander Hugo Chavez’s liberating work, overthrowing the government of the Constitutional President of the Bolivarian Republic of Venezuela Nicolas Maduro, ending democracy and taking over the country’s natural wealth, which has not been allowed by the brave people of Guillermo Ribas and Simon Bolivar.

In Venezuela, the Afrodescendant Movement has maintained a key role in the construction and defense of the Bolivarian Revolution, with its Cumbes, communes and other forms of people’s power organization. Its historical forms of community life are fundamental in the construction of a communal society; its knowledge contributes decisively to the preservation of planet earth; its traditional mode of production contributes extensively to food security. Their positive evaluation is essential in the battle against the neoliberal model, a great importance issue considering that the Afrodescendant sector, scattered throughout the country, constitutes more than 50% of the population.

Today, when a new progressive cycle emerges in Our America, we understand that the full and irreversible liberation of our societies requires a new civilization that recognizes the millions and millions of people of African descent that populate these lands and thus dismantle neocolonialism as a cross-cutting element of neoliberal capitalism.

In this context, the Afro-descendant International Congress declares:

The Afro-descendant International Congress assumes the spirit of the “Final Declaration of the XXV Meeting of the Sao Paulo Forum” adopted in the city of Caracas in July 2019. Consequently, we approve the following Plan of Struggle: