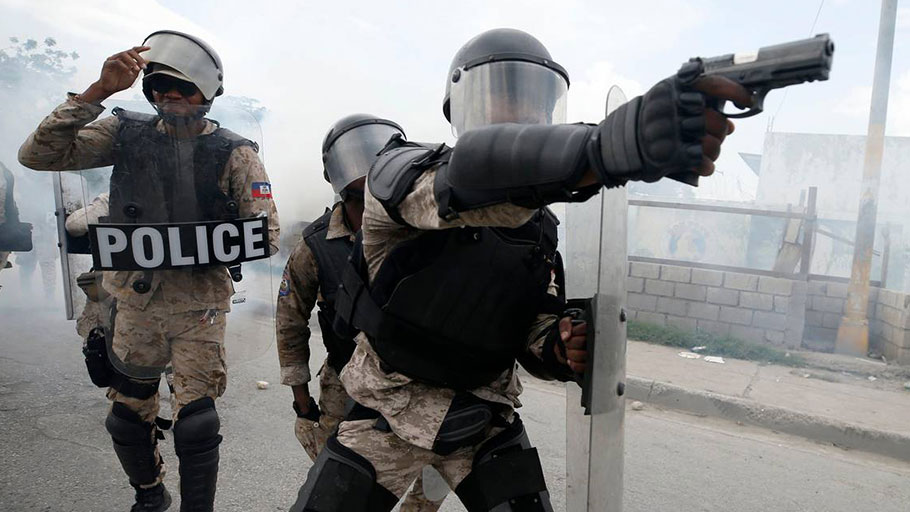 A police officer aims his weapon after demonstrators calling for the resignation of President Jovenel Moise broke through their lines, in Port-au-Prince, Haiti, Friday, Oct. 4, 2019. Rebecca Blackwell AP

A massive crowd of anti-government protesters in Haiti cranked up the pressure for President Jovenel Moïse to step down Friday, taking their resignation demands to the United Nation’s peacekeeping headquarters in Port-au-Prince, where they asked the international community to stop supporting the country’s leader.

Tying up traffic in front of Toussaint Louverture International Airport, the demonstrators — who later burned tires in front of the nearby domestic airport while another group made its way to Petionville — were among thousands who took to the streets in a nationwide call against Moïse, whose 32 months in office have been saddled with graft allegations, soaring inflation, a depreciating currency and government ineptness.

In a letter addressed to U.N. Secretary-General António Guterres and delivered to the U.N. by a small delegation, opposition leaders blasted Moïse’s leadership, saying “the people do not recognize him anymore as head of state.” They provided an exhaustive list of issues, from a massacre in La Saline last year, in which two government officials were implicated, to a Haitian court’s audit of misuse of Venezuela’s PetroCaribe oil program, which implicated the president.

“We solicit, in your capacity as Secretary-General of the United Nations, your disassociation from Jovenel Moïse by giving all of your support to the Haitian people,” the letter said. “He doesn’t rule anything and he has no control over the country. He is incapable.”

Guterres’ office, which has mentioned Haiti twice this week during its daily press briefings, did not say anything about Friday’s protest. But during the noon U.N. briefing, spokesman Stephane Dujarric commented about street demonstrations taking place in several countries around the world. The secretary-general was deeply concerned that some of the protests had led to violence and, in some instances, resulted in the loss of life and serious injuries, Dujarric said.

“The Secretary-General restates that freedom of expression and peaceful assembly are fundamental rights that must be respected,” Dujarric said. “The Secretary-General reiterates his call to security forces to act at all times with maximum restraint and to respond to any acts of violence in conformity with relevant international human rights standards on the use of force by law enforcement officials. He also calls on protesters to demonstrate peacefully and to refrain from violence.”

Ahead of Friday’s protests, Haiti’s National Network for the Defense of Human Rights reported that recent violent protests had left 17 people dead, and 187 injured, including two journalists who were shot.

The human rights group accused police of using repressive tactics and called for an investigation.

On Friday, the massive protests in Port-au-Prince started peacefully but there were violent outbreaks, according to radio reports, when anti-riot officers with the Haiti National Police started firing tear gas.

The effect was so powerful that a nearby hospital sent an SOS alert to journalists, asking police and protesters to respect the perimeter of the hospital. One of its patients, in a coma, could no longer withstand the gas, a doctor said. 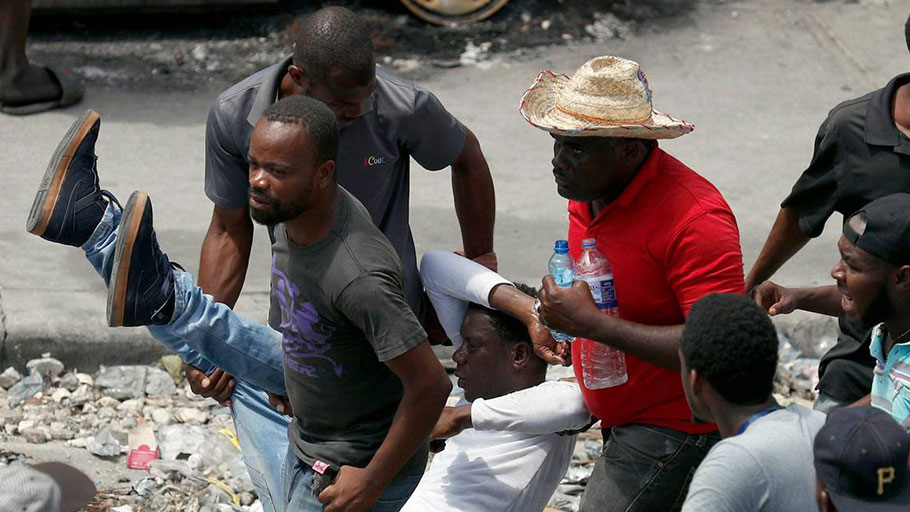 An injured demonstrator is carried to safety during a protest calling for the resignation of President Jovenel Moise, in Port-au-Prince, Haiti, Friday, Oct. 4, 2019. Rebecca Blackwell AP

Earlier, police found themselves overrun and outsmarted as they tried to block the crowd from reaching the airport. Some demonstrators quickly branched off and traveled on a back road. Carrying placards that read, “Resign Jovenel,” and “America stop funding corruption,” the protesters marched past the Ministry of Health and turned onto Carrefour Rita to arrive in front of the U.N. site. Some of the placards referred to the Core Group, a label for the international community in Haiti.

In the crowd were mothers who complained about not being able to send their children to school; young men who decried the corruption involving public officials, and opposition politicians, including the mayor of Haiti’s largest city.

“We don’t have a choice,” Port-au-Prince Mayor Ralph Youri Chevry said when asked why he was out marching. “We need another system.”

He later tweeted: “Today I’m shutting down the streets along with my fellow Haitians to request the departure of President Jovenel Moïse. I believe in a Haiti where the people deserve more than what the central power offers. I will not stop fighting until a new system emerges under a different leadership that can lead the people well.” 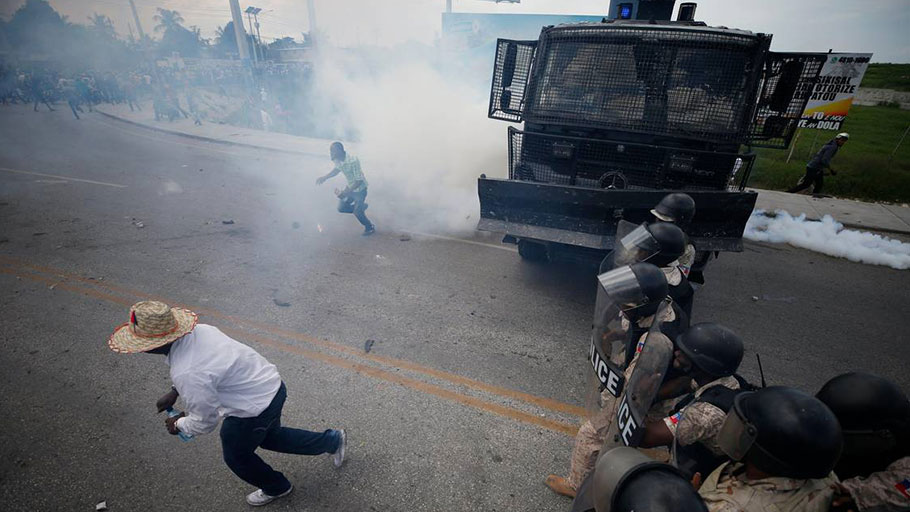 Demonstrators run from a cloud of tear gas after a scuffle with the police during a protest calling for the resignation of President Jovenel Moise, near the airport in Port-au-Prince, Haiti, Friday, Oct. 4, 2019. Rebecca Blackwell AP

Haiti National Police confirmed eight people were injured by gunshot Friday, including two police officers in the capital and six in Jeremie. Two homes were also set ablaze in Jeremie. In the southern region, where a 70-year-old hospital patient was assaulted earlier this week in Les Cayes, police made two arrests Friday for attempted arson of a gas station and three others for carrying illegal arms.

Unlike in recent protests, which quickly turned violent, demonstrators Friday tried to keep things peaceful. At some points, it felt more festive than confrontational.

In Port-de-Paix, as a crowd headed toward the courthouse, protesters changed their mind and turned around to avoid clashing with police. And in Cap-Haitien, where they marched out of the city and back to Vertières, where a monument stands to the last battle of the second war of Haitian independence, some tried to negotiate their way past a police roadblock to get into Carenage, a residential area where the U.N. has an office.

Friday’s protest, one of the largest in recent months, came a day after a group of influential Haitian-American activists met with Democratic House Speaker Nancy Pelosi at a community center in unincorporated North Miami-Dade County. The round-table discussion before a packed room was organized by U.S. Rep. Frederica Wilson, a Miami Democrat.

With a message similar to their counterparts in Haiti, the Miami group told Wilson and Pelosi that after years of interference in Haiti, it was time for the U.S. to listen to the people and respect the country’s sovereignty.