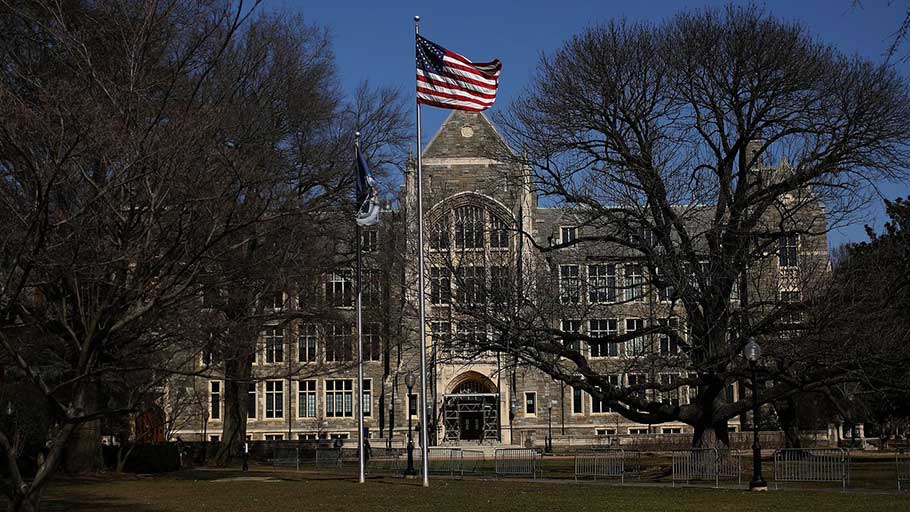 Students at Georgetown University have called on the school to create a fund to help descendants of enslaved people sold in the 19th century. (Win McNamee/Getty Images)

By Lauren Lumpkin and Susan Svrluga, The Washington Post —

A couple dozen Georgetown University students broke into a chant Thursday outside a meeting of the school’s board of directors, seeking to put pressure on the university to do more to redress historical wrongs.

A student vote in April overwhelmingly called on Georgetown to create a fund to help descendants of enslaved people who were sold in the 19th century when the university was struggling to escape from debt.

Slavery was so integral to the institution’s history, said Maya Moretta, a student activist with Students for GU272, that “there would be no Georgetown without it.” The impact of that can still be felt today, she said. “It’s a debt we need to pay back,” she said.

Two-thirds of undergraduate students who voted in the referendum supported the proposal. The measure is not binding, but it sent a strong message to administrators.

That message resonated outside the campus, too, coming at a time when reparations are being promoted by some Democratic candidates for president, and when a growing number of colleges are grappling with how best to acknowledge and atone for historical ties to the slave trade.

In recent years, Georgetown has been delving into the legacy of slavery at the institution and its impact on generations of descendants. In 1838, two priests who served as presidents of Georgetown managed the sale of 272 people enslaved by Maryland Jesuits. The money from that sale resolved a crucial debt. The impact on people was horrific: Families were torn apart, and conditions were brutal on many Southern plantations.

In 2017, Georgetown, the Society of Jesus (the Roman Catholic order better known as Jesuits) and the Archdiocese of Washington apologized for their participation in slavery.

University officials have taken other steps to acknowledge and address past wrongs, such as renaming two buildings and giving an admissions advantage to descendants of the enslaved. This semester, the school is offering a new course on slavery, memory, and reconciliation at Georgetown.

Students said after the vote they hoped Georgetown’s board of directors would take the matter up at their spring meeting. Moretta said the group has been talking with administrators for months and grown increasingly frustrated.

“A lot of the conversation seems to be kind of circular, and referring back to dialogue,” she said.

Georgetown students vote on reparations for the descendants of slaves

The student referendum proposes a $27.20 per semester student fee that would increase with inflation and fund a nonprofit to give money to charitable causes benefiting descendants of the 19th-century sale.

Some students opposed the idea for reasons both philosophical and practical; some thought it wrong to impose a moral judgment on the university and a financial burden on students, and some said the idea of the nonprofit was too vague to easily enact.

But the referendum was endorsed by more than 2,500 students and drew national attention.

In the months since the vote, the school has arranged meetings for students with university leaders including the board of directors, with graduates, and the presidents of the GU272 Descendants Association and the Jesuit Conference of Canada and the United States, school spokeswoman Meghan Dubyak said.

Students held signs and did homework in a hallway outside the board meeting on Thursday. Jessie Richards, a senior, said the goal was “to force the board of directors to actually look at the students they’re ignoring. . . . We want them to realize the gravity of their inaction.”

“We certainly want to involve the descendants in the decisions the university makes,” Kilkenny said.

The board of directors continued its discussion of the student referendum at the meeting Thursday, Dubyak said.

University officials appreciate the students’ passion and engagement on the issue, Dubyak said in a statement, and have been “working through questions raised by the student referendum, including governance structures, the university’s non-profit status, sources of funding, consultations with the Descendant Community, and connections to our ongoing dialogue process with the Descendant Community and Society of Jesus.”

Charles Ethan Clark, a sophomore who is a descendant, said when he learned about his ancestry in 2017, “it was eye-opening, confusing and conflicting,” especially because he is Catholic and went to a Jesuit high school. “Going to the school that enslaved your people — it’s crazy to think about,” he said. Clark is appreciative of the admissions advantage and Georgetown’s efforts to research the history but said he thinks more should be done.

Students scrambled as the meeting ended, and they realized some board members were leaving through another exit.

Some demonstrators scooped up their posters and ran to the back of the conference room to meet school leaders.

“The goal was never to be confrontational. To go through another exit is to undermine the message of respect and understanding,” Nile Blass, a sophomore, said. “It feels like cowardice.”