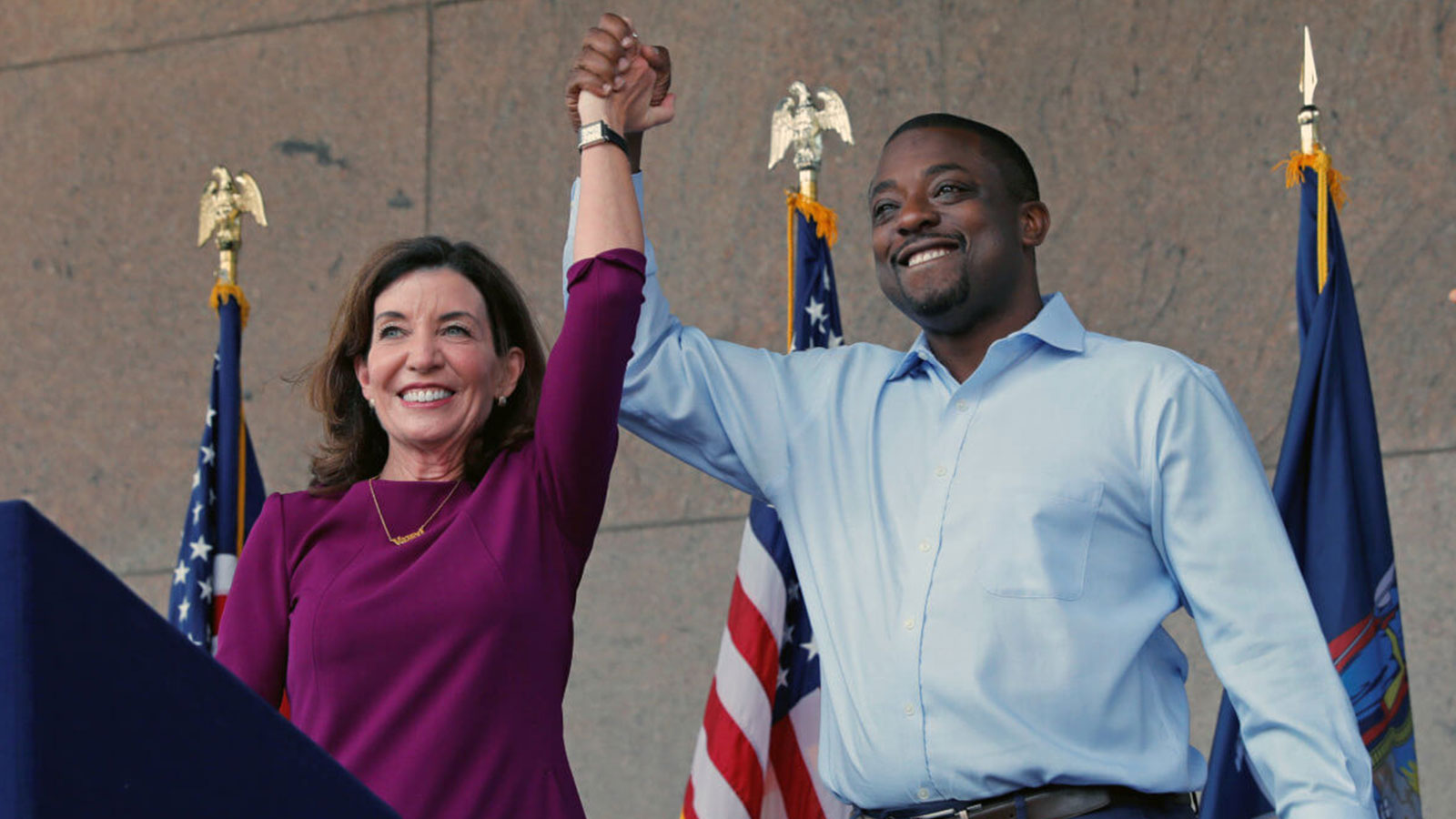 By Nelson A. King, Caribbean Life —

Benjamin, 44, the son of a Guyanese mother and Jamaican father, previously served as the New York State Senator for District 30 – which encompasses Harlem, East Harlem and the Upper West Side in Manhattan.

He was the chairman of the New York Senate Committee on Revenue and Budget, and Senior Assistant Majority Leader, where he distinguished himself as a leader in criminal justice reform and affordable housing.

Benjamin, who remains heavily involved in his community in Harlem, and Hochul, 62, previously worked together on several key issues, including fighting the opioid epidemic and boosting addiction recovery programs, supporting Minority and Women-owned Business Enterprises (MWBE) and making it easier for New Yorkers to vote.

“I believe that governing is about working together. Teamwork is the essence of effective leadership, and it is more important than ever as we confront the urgent problems facing the state,” said Hochul in making the announcement. “My administration is going to attract the best and the brightest – people who share my values of working hard for the people of this state and who will get the job done – and that includes the newest member Senator Brian Benjamin, who has agreed to serve as my lieutenant governor.

“There is so much work to do, and I am grateful to have him by my side, as we implement our vision for a safer, healthier and fairer New York,” added Hochul, the former lieutenant governor, who, on Tuesday, succeeded former New York Gov. Andrew Cuomo, who resigned after the state’s Attorney General Letitia James issued a blistering investigative report allegedly accusing Cuomo of sexually harassing 11 women and creating a toxic work environment.

“I want to thank Governor Hochul for trusting me with the incredible honor of serving alongside her as lieutenant governor,” Benjamin said. “Gov. Hochul is a collaborator, who makes sure everyone has a seat at the table, and, like me, is laser-focused on listening to the needs of New Yorkers and empowering local leaders.

“We have a strong history of collaboration that will help us to hit the ground running immediately, as we help guide New York through this challenging moment in history,” he added.

The Rev. Al Sharpton, founder and president of the Harlem-based National Action Network (NAN), said: Whether it’s life experience, race, background or otherwise, New York was built on a foundation of diversity and, thanks to Gov. Hochul’s leadership, that foundation has already become a pillar of her administration with the selection of Brian Benjamin as our state’s next lieutenant governor.

“From his early work to build affordable housing in Harlem as a community leader, to his advocacy as a longtime member of NAN, to his efforts as a senator to solve the issues threatening the health and well-being of New Yorkers, like the opioid crisis, Senator Benjamin has made a career of tackling the problems that have prevent far too many working families from lifting themselves up,” he said.

“This is a fantastic choice, and I look forward to helping both Gov. Hochul and Sen. Benjamin begin this next chapter in New York’s history,” Rev. Sharpton added.

Dr. Hazel N. Dukes, president of the New York State Conference of the National Association for the Advancement of Colored People (NAACP), the oldest and largest civil rights organization in the United States, said that “from his work helping fight the opioid crisis to his work to help Minority and Women Owned businesses thrive, Brian Benjamin has spent his career focused on the issues that impact everyday New Yorkers, and I am so excited to see him continue that work as our state’s lieutenant governor.

“In just a few days, Gov. Hochul has already set New York on a path for success, and this selection only further solidifies that point,” Dr. Dukes added. “I am so excited to begin working with the governor’s administration to move New York forward and extend my sincerest congratulations to Senator Benjamin.”

“Congratulations to my Senate colleague Brian Benjamin on his appointment as Lieutenant Governor of New York,” Persaud told Caribbean Life late Thursday. “He has been an outstanding senator, and I know that he is ready to work alongside Gov. Hochul on the plans to rebuild our state, as we emerge from the COVID-19 pandemic.

“I will miss him in the Senate as a colleague and friend, and as part of the Guyanese delegation, but I am looking forward to working with him in his new role to achieve great things for our state,” she added. “Brian is capable and qualified to be a member of the team that will move us forward.”

The new lieutenant governor was reportedly short-listed for the position, along with the Haitian-American chair of the Brooklyn Democratic Party, New York State Assembly Member Rodneyse Bichotte-Hermelyn, the daughter of Haitian immigrants; New York State Sen. Jamaal Bailey, the chairman of the Democratic Party in the Bronx; and Rubén Díaz, Jr., the outgoing Bronx borough president.

While not confirming that she was short-listed, Bichotte-Hermelyn, 48, who represents the predominantly 42nd Assembly District, told Caribbean Life earlier this week than “only eight US states currently have female governors.

“Women are significantly underrepresented at this level,” she said. “Nonetheless, I am thrilled that our state is finally joining the ranks with the swearing in of Kathy Hochul. This is long overdue.

“I hope that Hochul is the first of many women to fill this role, and I am tremendously excited for her administration to take control of what has long been an all-boys club,” Bichotte-Hermelyn added. “Hochul is qualified to lead, and has more experience helping people on a grassroots-level than anyone to hold office in the past four decades.”

Benjamin says on his website that he was born in Harlem “to a Caribbean mother who came to this country seeking new opportunities.”

“Though they didn’t have a college education, his parents were fortunate enough to find well-paying union jobs, which allowed them to provide Brian and his siblings with a middle-class upbringing,” the website says.

“After graduating from high school in New York City, Brian sought the quality education his parents had dreamed of providing him with, earning his undergraduate degree in Public Policy from Brown University and his MBA from Harvard Business School,” it adds.

He then returned to Harlem to build affordable housing, creating over a thousand units of environmentally-sustainable, affordable housing at an MWBE, while helping young people develop work skills and secure good construction jobs through community youth programs, according to the website.

As the second highest-ranking position in New York State, Benjamin, as lieutenant governor, will deputize in the governor’s absence, death, removal or resignation.

It remains unclear who might emerge as a Democratic primary challenger to Hochul in 2022.

James is considered a strong potential candidate, though she is yet to indicate whether she will contest the race.

Williams – who ran a strong but unsuccessful race for lieutenant governor against Hochul in 2018, losing by 6.6 percentage points – said he was “actively exploring” a run for New York Governor next year.