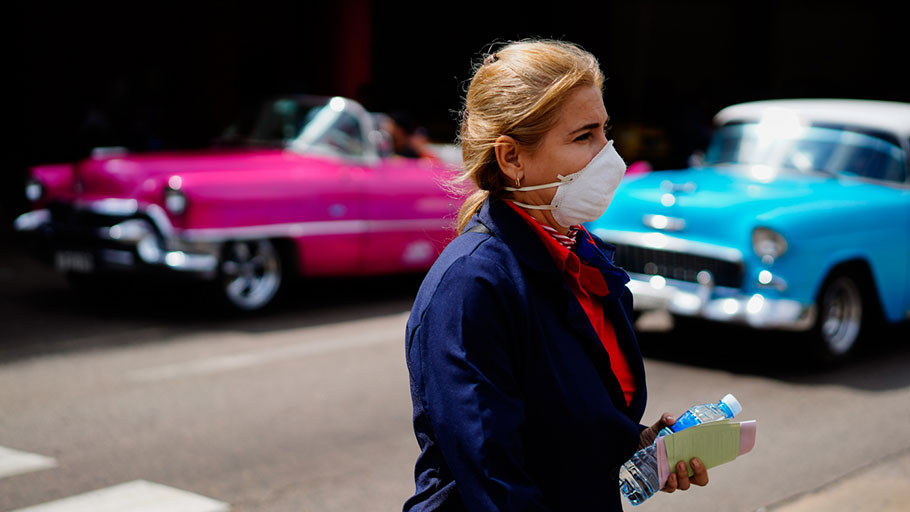 How Cuba is Leading the World in the Fight Against Coronavirus

You Are Here: Home » Blog » COVID-19 (Coronavirus) » How Cuba is Leading the World in the Fight Against Coronavirus

A woman wears a mask as a precaution against the spread of the new coronavirus at the Jose Marti International Airport in Havana, Cuba, March 12, 2020. Ramon Espinosa, AP

As Cuba sends doctors around the world to fight coronavirus, a Cuban antiviral drug is helping stem the tide of the outbreak.

While the United States government is complicating efforts to treat coronavirus across the world and is using the pandemic to increase pressure on countries already struggling under U.S. sanctions, including Iran, Syria, and Venezuela, the small island of Cuba, itself a target of Washington’s ire, is leading the fight against the spread of COVID-19.

And while the Trump administration slashes the Center for Disease Control’s budget amid an imminent pandemic, China appears to have gotten to grips with the coronavirus outbreak. Beijing reported only 16 new cases of the virus today, and there are now more total cases outside mainland China than inside it.

Integral to reducing the number of deaths is a Cuban antiviral drug, Interferon Alpha 2b. The drug, according to Cuban biotech specialist Dr. Luis Herrera Martinez, “prevents aggravation and complications in patients, reaching that stage that ultimately can result in death.” It has been produced in China since 2003 in a partnership with the state-owned Cuban pharmaceutical industry. Interferons are “signaling” proteins, explains Dr. Helen Yaffe of Glasgow University, an expert on Cuba. These proteins are produced and released by the body in response to infections and alert nearby cells to heighten their antiviral defenses. It is not a cure or a vaccine to COVID-19, but rather an antiviral that boosts the human immune system.

Cuba has used it to fight outbreaks of Dengue Fever, a common occurrence on the mosquito-plagued island. The Castro government was forced to develop a strong pharmaceutical industry because of the constant U.S. embargo. Cuba estimates the decades-long sanctions, continually declared illegal by the United Nations, have cost it over $750 billion.

Today, the Cuban government offered haven to the stranded cruise ship, MS Braemar. The ship has five confirmed COVID-19 cases on board and had been turned away by both Barbados and the Bahamas.

Despite confirming its own first cases, the island is continuing to export medical professionals to the rest of the world. Yesterday, Jamaican Health Minister Christopher Tufton announced that 21 nurses from its neighbor would arrive imminently, the first of more than 100, he hoped. But they have also sent doctors to more advanced nations, such as Italy.

#INPICTURES ? | Cuban and Chinese doctors arriving in Italy to assist the health authorities.

Cuba has the interferon Alpha-2B, powerful in the treatment of coronavirus and China has the experience of having overcome the peak of infections in its territory. #COVID19 pic.twitter.com/QonCFE4smv

Sarpoma Sefa-Boakye, a Ghanaian-American doctor who studied for free in Havana and now practices in California told MintPress: “You don’t hear of Cuba’s health contributions in the United States,” claiming that there are more Cuban doctors in Africa than African doctors and that the Caribbean island trains more Africans in medicine than all of Africa does. She first heard of the possibility of scholarships for Americans while studying in Ghana. She notes that Cuba is well placed to combat the coronavirus because of its culture of quarantining for viruses and its experience fighting Dengue.

Despite inadequate testing, the United States has over 4,000 confirmed cases of COVID-19. There has not been one centralized plan from the government; instead, different authorities have enacted different laws, with varying degrees of severity. New York City, for example, will go into lockdown tomorrow, closing all schools, universities and non-essential stores. On the other hand, other cities remain almost completely normalized.

Dr. Sefa-Boakye advised that stringent measures were urgently needed to fight the virus’ spread; “Quarantining has to be the only way that we can get a hold of transmission,” she said. “The science will tell you, you talk to any biologist or anyone who has taken a basic science class: viruses replicate. That is how they move. They need a host and a source. I learned that in Cuba.” She also warned that the United States is “facing an increase in transmission because of our lack of infrastructure.”

Worldwide, the number of confirmed cases reached over 175,000 today, with 6,717 deaths. COVID-19 has now reached a large majority of countries. Medical professionals urge everybody to reduce their contact with other people to the minimum necessary, regularly wash their hands with soap and water, avoid touching their face, and cover their mouths with their elbow when they cough or sneeze.

The World Health Organization (WHO) advised countries should check all potential cases. “You cannot fight a fire blindfolded. We have a simple message for all countries: test, test, test,” said WHO Director General Tedros Adhanom Ghebreyesus of Ethiopia. “This amazing spirit of human solidarity must become even more infectious than the coronavirus itself. Although we may have to be physically apart from each other for a while, we can come together in ways we never have before…We’re all in this together. And we can only succeed together,” he added. It is that ethos that has driven Cuba’s revolutionary healthcare system for 60 years.

This article was originally published by MPN News and republished here under a CC 3.0 license.

Alan MacLeod is a Staff Writer for MintPress News. After completing his PhD in 2017 he published two books: Bad News From Venezuela: Twenty Years of Fake News and Misreporting and Propaganda in the Information Age: Still Manufacturing Consent. He has also contributed to Fairness and Accuracy in Reporting, The Guardian, Salon, The Grayzone, Jacobin Magazine, Common Dreams the American Herald Tribune and The Canary.