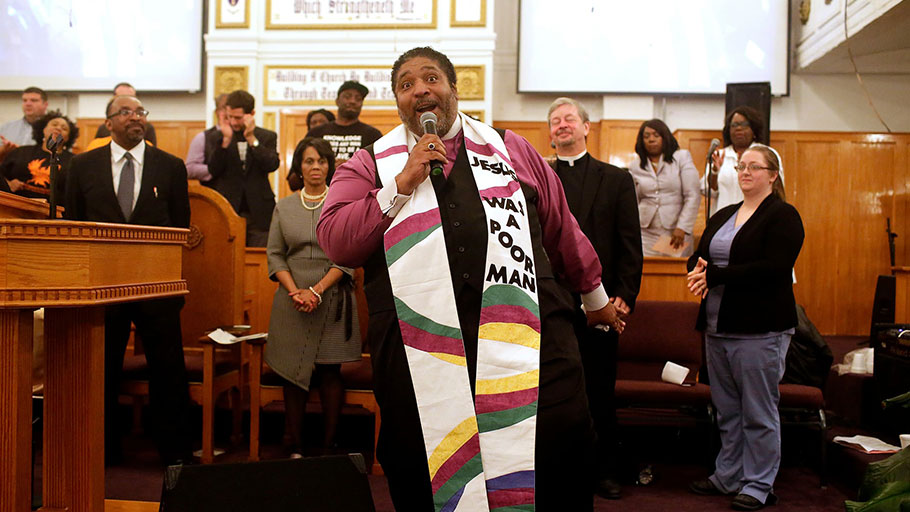 You Are Here: Home » Blog » News & Current Affairs » Hundreds arrested as activists pick up where Martin Luther King left off

‘Something’s wrong in America.’ William Barber, a pastor, is one of the co-chairs of the Poor People’s Campaign. Photograph by Joshua Lott, The Guardian

By Lauren Gambino, The Guardian —

Hundreds of low-wage workers, faith leaders, civil rights organizers and liberal activists were arrested in demonstrations in Washington and in cities across the US on Monday as they resumed the work Martin Luther King left unfinished.

The new effort, The Poor People’s Campaign: A National Call for Moral Revival, is being led by co-chairs William Barber, a pastor at Greenleaf Christian Church in Goldsboro, North Carolina, and Liz Theoharis, an ordained minister and anti-poverty campaigner from New York City.

In Washington, the group gathered on the lawn outside the US Capitol to hear Barber declare: “Something’s wrong in America.”

Their action on Monday, Barber continued, was not just a commemoration of King’s anti-poverty efforts – it was a new call to arms for the next generation.

“We are here to have a reconsecration and a re-engagement because you do not commemorate the death of [a] prophet,” Barber said, his voice building as he spoke. “You go to where they were killed, reach down in the blood, pick up your baton and carry it the next round of the way. Now who’s ready?”

The crowd parted and Barber and Theoharis led a procession of activists trained in civil disobedience toward the street, where they were prepared to be arrested. Two-by-two the demonstrators walked, representing nearly three dozen states and Native American reservations.

The group sang hymns and chanted their demands as they marched toward the police, who had formed a blockade. Barber, in his purple robe, was the first to breach the line and was arrested. Dozens more followed as hundreds more cheered them on from the steps of the Library of Congress. Theoharis was also arrested.

Similar scenes were replicated across the country in North Carolina, Missouri and California. In total, the Poor People’s Campaign said 1,000 activists were arrested nationwide.

The group hopes their action will draw attention to what they say is an urgent need to alleviate poverty and improve living conditions for millions of Americans. In 2016, nearly 41 million Americans lived in poverty, according to the US Census. But the organizers point to research by the Institute for Policy Studies that found nearly 140 million people are either poor or low-income when other factors are considered, including expenses on food and housing.

The campaign’s list of demands are long and aspirational. It includes federal and state minimum wage laws “commensurate for the 21st century economy”, relief from student loan debt, a repeal of the 2017 GOP tax cuts legislation, restoration of the Voting Rights Act, an end to mass incarceration, a fracking ban, protection of public lands, a cessation of US military involvement and universal healthcare.

The original Poor People’s Campaign of 1968 was organized by King in the months before his assassination. The centerpiece of the campaign was a mule-drawn caravan from Marks, Mississippi, which at the time was the poorest town in the poorest county of the poorest state in the nation. The procession arrived on the National Mall in Washington to join a national protest in Washington, where thousands of impoverished Americans occupied the National Mall for six weeks in a camp named Resurrection City.

The protesters will return each Monday for the next 40 days. Every week will focus on a different group of marginalized people. This week the protests and activities will focus on child poverty, women and people with disabilities. Other themes include racism, veterans, war and the environment.

At the end of the 40 days of protest, on 23 June, the activists from around the country will gather in Washington for a mass demonstration at the US Capitol. Organizers say the 40-days of action are just the beginning of what they hope will be a multi-year campaign that will include voter mobilization and other efforts.