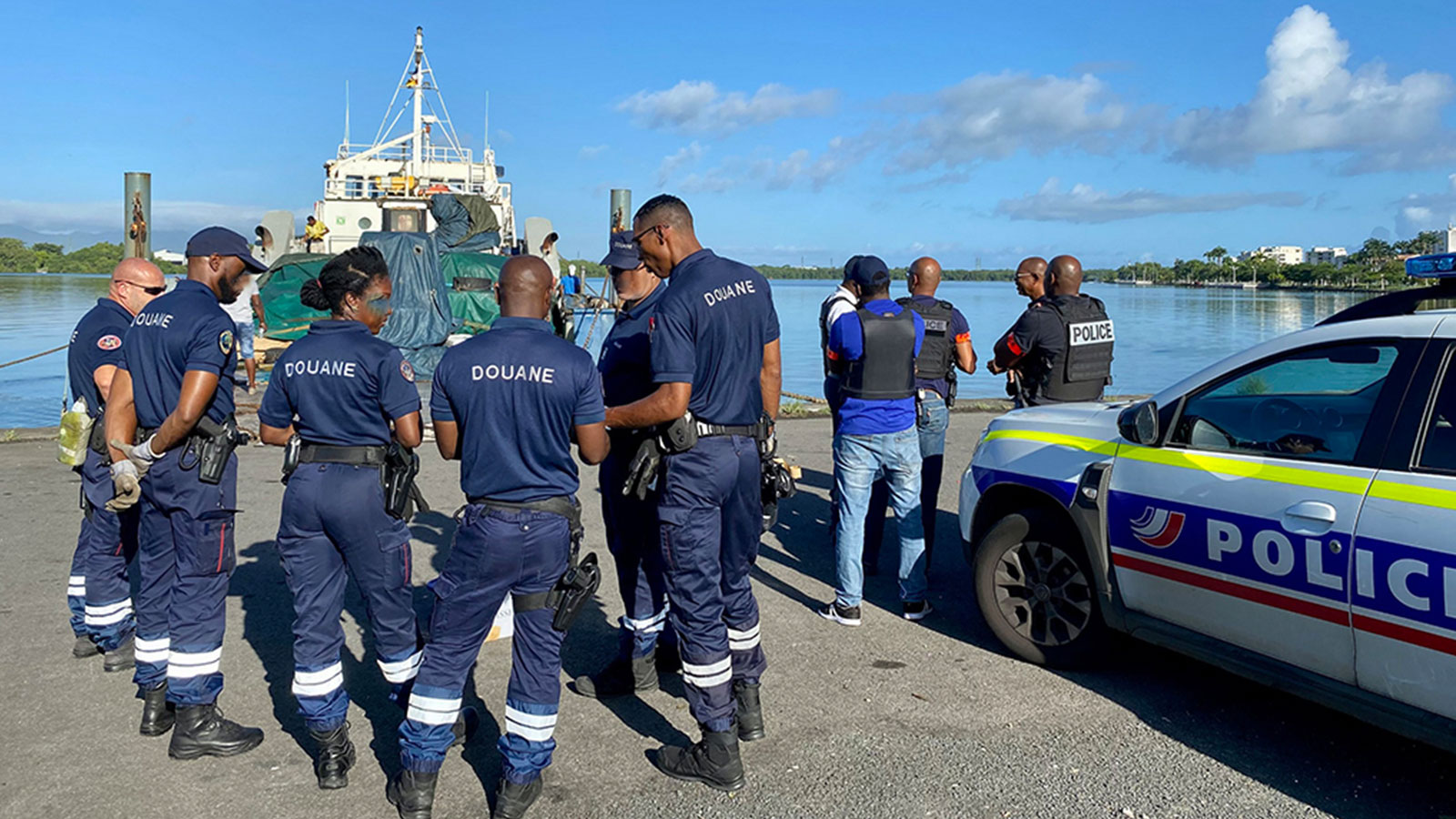 Hundreds of firearms and 12.6 tonnes of drugs seized in Caribbean operation

You Are Here: Home » Blog » News & Current Affairs » Hundreds of firearms and 12.6 tonnes of drugs seized in Caribbean operation

Operation Trigger VII leads to more than 500 arrests across 19 countries.

A joint firearms operation between INTERPOL and the Caribbean Community (CARICOM) Implementation Agency for Crime and Security (IMPACS) has led to the seizure of some 350 weapons, 3,300 rounds of ammunition and record drug hauls across the Caribbean.

Police made a total of 510 arrests during the week-long operation, including the subject of an INTERPOL Red Notice wanted for murder.

Trigger VII actions also led to the impressive seizure of 10.1 tonnes of cocaine and 2.5 tonnes of cannabis, highlighting the convergence of trafficking routes and the use of firearms used to control the illegal drug trade. 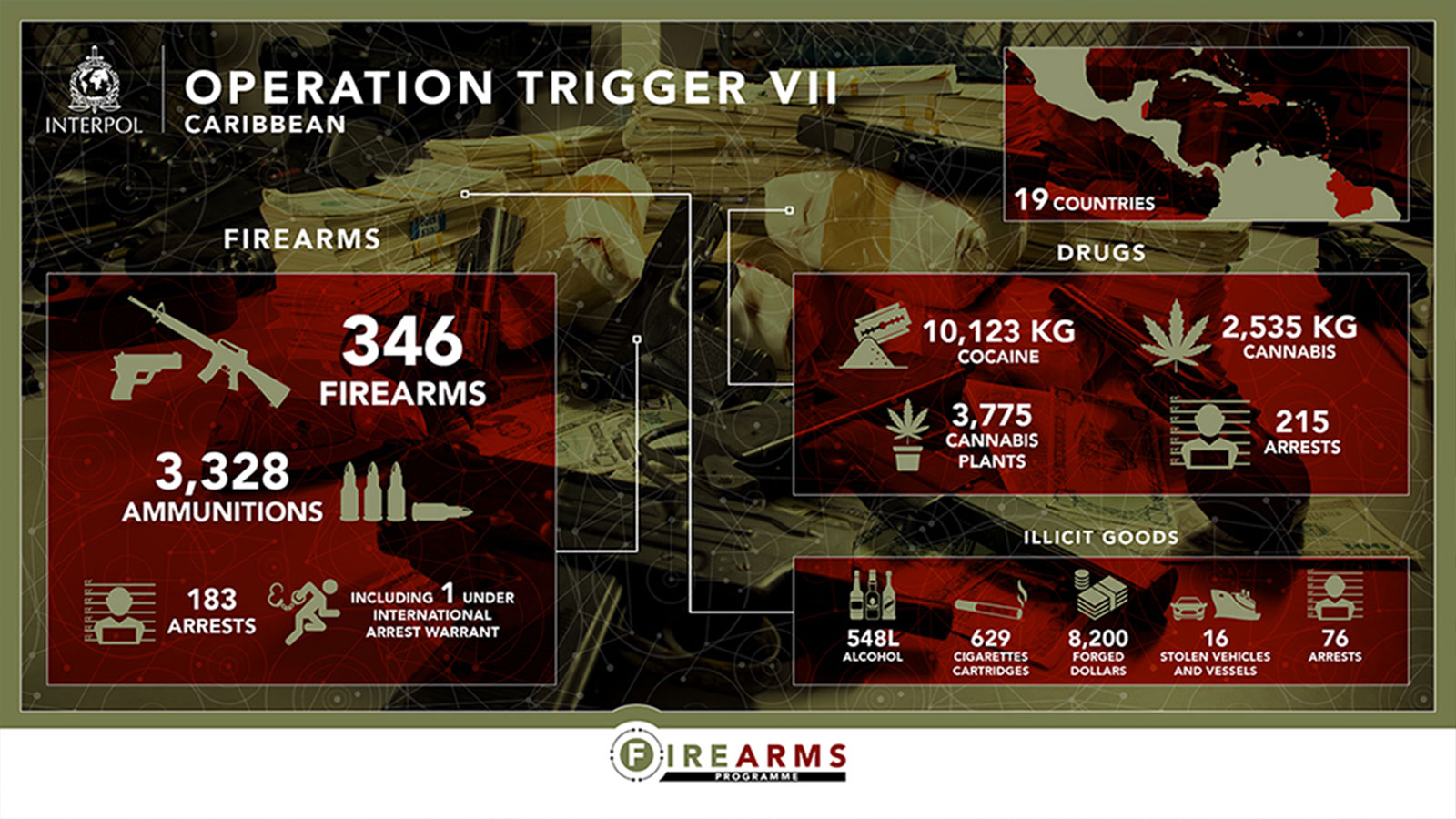 An operational hub was hosted by CARICOM IMPACS in Barbados. Officers from INTERPOL, the Joint Regional Communications Center (JRCC), the US Bureau of Alcohol, Tobacco, Firearms and Explosives (ATF), and US Homeland Security Investigations (HSI), worked side-by-side to provide real-time assistance to officers in the field.

When customs authorities in Dominica x-rayed a suspicious package, they sent information to the operational hub for checks on the sender and intended recipient. ATF and HSI queried their respective databases, and officers found multiple firearms purchases, placing the package under surveillance. When the recipient came to collect the shipment, police discovered 20 pistols and multiple rounds of ammunition hidden in cereal boxes. Investigations are continuing both in the United States and Dominica.

HSI and the Royal Bahamas Police Force worked closely on an international controlled delivery from Fort Lauderdale to Nassau. The package, which had been flagged in the US, was monitored throughout its shipment in order to seize two firearms and arrest the recipient. 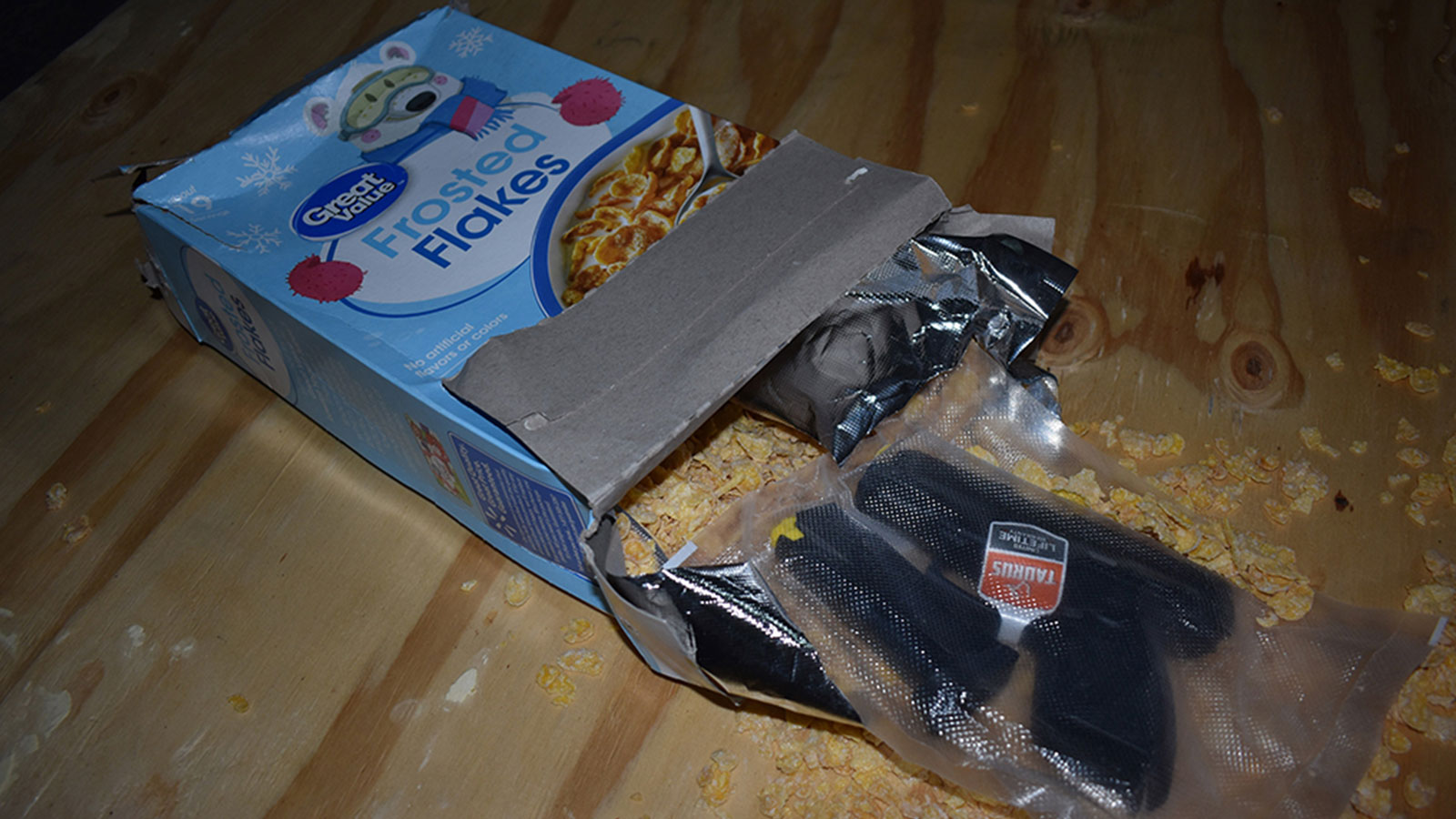 A number of emerging trends were identified throughout the operation. In St Kitts and Nevis, for example, officers saw their first seizure of firearms assembled using ‘80 per cent’ pistol frames. Also known as ghost guns, these weapons are unserialized and untraceable as they are often completed at home using specialized kits, allowing individuals to bypass gun laws and checks.

Authorities in Jamaica, with support from US law enforcement, made a record-setting bust when they intercepted 500.2 kg of cocaine – worth approximately USD 25 million – about to be loaded onto a private jet bound for Canada. In a separate case, they also seized 500kg of cannabis.

In Curaçao, the Coast Guard stopped vessels carrying a total of 3 tonnes of cocaine and 1.8 tonnes of cannabis. Authorities made 17 arrests in connection with the shipments, believed to have originated in Venezuela. Authorities in Bonaire made similar interceptions of cocaine en route from Venezuela, seizing nearly 4 tonnes.

Several countries reported reverse trafficking routes, an increasing trend, with seizures of cannabis coming from Canada and the United States into the Caribbean region. 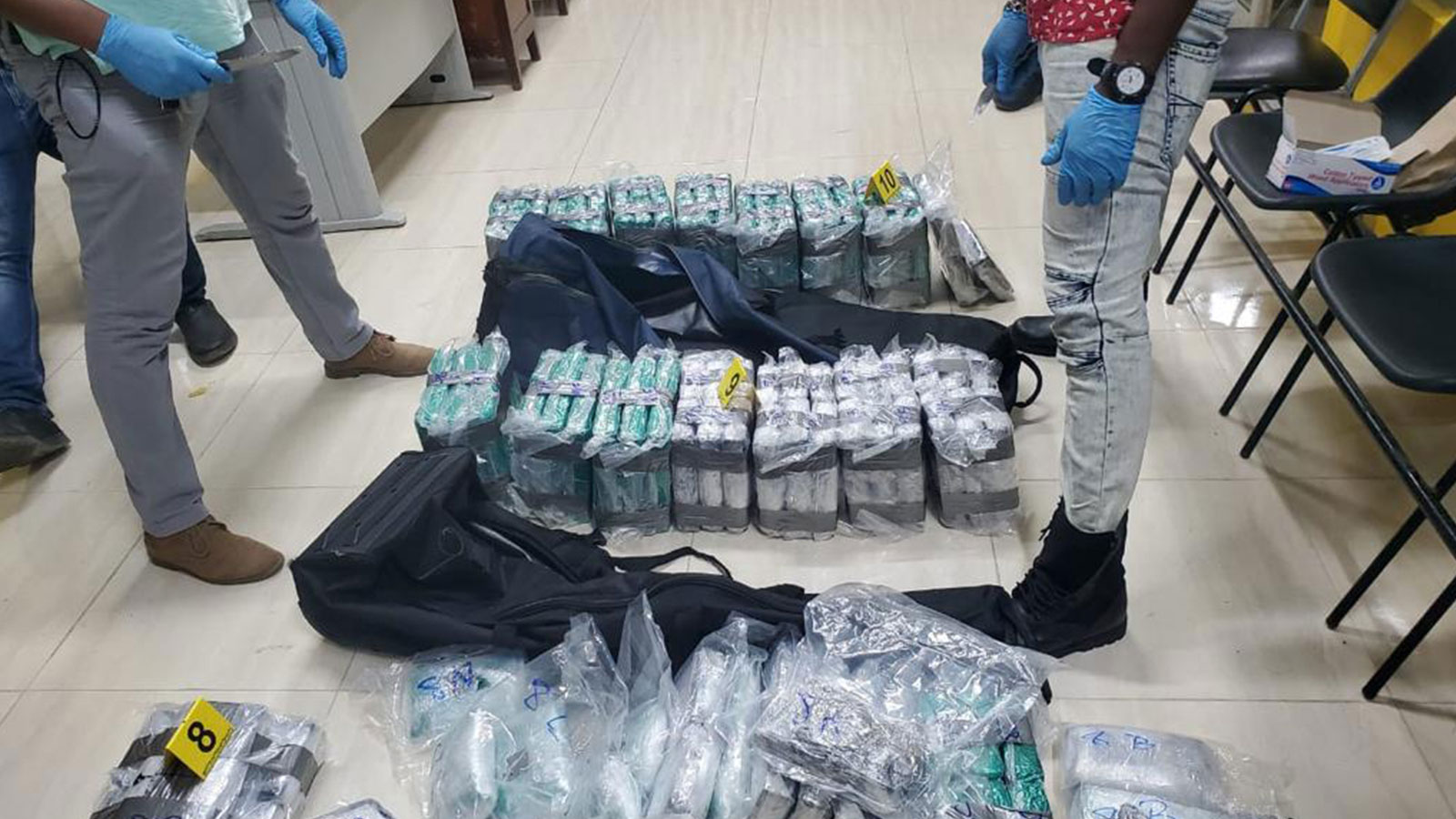 Operation Trigger VII – Authorities in Jamaica, with support from US law enforcement, made a record-setting bust: 500.2 kg of cocaine.

Cannabis plants, forged US currency, stolen vehicles and vessels, contraband cigarettes and alcohol were also seized during the operation.

“The results of Operation Trigger VII show how firearms are clear enablers of most types of crime. When we go after their weapons, we also go after the full range of activities carried out by organized crime groups,” said INTERPOL Secretary General Jürgen Stock.

“The results also highlight the power of what law enforcement bodies can achieve when we work in a joint, coordinated manner, sharing information in real-time on cross-border investigations,” the Secretary General added.

Lt. Col. Michael Jones, Executive Director of CARICOM IMPACS, said: “Without this cohesive action among agencies, our region will not be able to effectively tackle illicit trafficking and by extension, transnational organized crime.”

Operation Trigger VII allowed authorities to gain a better understanding of existing threats, patterns, trends and smuggling channels within the region, hence ultimately saving lives. I am indeed proud of the role CARICOM IMPACS played in the exercise and more so of its role as a coordination hub,” concluded Mr Jones.

Stephen Kavanagh, INTERPOL’s Executive Director of Police Services, highlighted that the operation was the first joint effort between INTERPOL and CARICOM IMPACS against firearms and would likely yield results for months to come as investigations continue.

The operation was carried out under the framework of INTERPOL’s Project Target, funded by the German Federal Foreign Office.