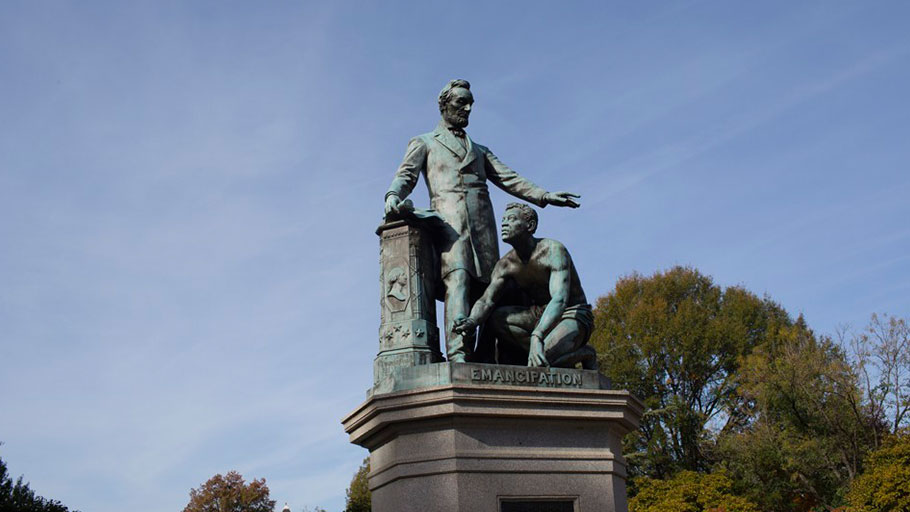 What Kids Are Really Learning About Slavery

You Are Here: Home » Blog » News & Current Affairs » What Kids Are Really Learning About Slavery

The Lincoln Emancipation Statue, paid for by former enslaved people and erected in Washington, D.C., in 1876, has been criticized for representing the history of slavery from a paternalistic perspective. Photo: Andrew Lichtenstein, Getty

A new report finds that the topic is mistaught and often sentimentalized—and students are alarmingly misinformed as a result.

A class of middle-schoolers in Charlotte, North Carolina, was asked to cite “four reasons why Africans made good slaves.” Nine third-grade teachers in suburban Atlanta assigned math word problems about slavery and beatings. A high school in the Los Angeles-area reenacted a slave ship—with students’ lying on the dark classroom floor, wrists taped, as staff play the role of slave ship captains. And for a lesson on Colonial America, fifth-graders at a school in northern New Jersey had to create posters advertising slave auctions.

School assignments on slavery routinely draw national headlines and scorn. Yet beyond the outraged parents and school-district apologies lies a complex and entrenched set of education challenges. A new report released by the Southern Poverty Law Center’s Teaching Tolerance project points to the widespread failure to accurately teach the hard, and nuanced, history of American slavery and enslaved people. Collectively, the report finds that slavery is mistaught, mischaracterized, sanitized, and sentimentalized—leaving students poorly educated, and contemporary issues of race and racism misunderstood.

In what it describes as the first analysis of its kind, Teaching Tolerance conducted online surveys of 1,000 American high-school seniors and more than 1,700 social-studies teachers across the country. The group also reviewed 10 commonly used U.S.-history textbooks, and examined 15 sets of state standards to assess what students know, what educators teach, what publishers include, and what standards require vis-à-vis slavery.

Among 12th-graders, only 8 percent could identify slavery as the cause of the Civil War. Fewer than one-third (32 percent) correctly named the 13th Amendment as the formal end of U.S. slavery, with a slightly higher share (35 percent) choosing the Emancipation Proclamation. And fewer than half (46 percent) identified the “Middle Passage” as the transport of enslaved Africans across the Atlantic Ocean to North America.

Maureen Costello, the director of Teaching Tolerance, said the research, conducted in 2017, revealed the urgent need for schools to do a better job of teaching slavery. “Students are being deprived of the truth about our history [and] the materials that teachers have are not particularly good,” she said. “I would hope that students would look at this and realize that they deserve to know better … and teachers need to know there are better ways to teach this [topic].”

The student results, which the report labels “dismal,” extend beyond factual errors to a failure to grasp key concepts underpinning the nature and legacy of slavery. Fewer than one-quarter (22 percent) of participating high-school seniors knew that “protections for slavery were embedded in [America’s] founding documents”—that rather than a “peculiar institution” of the South, slavery was a Constitutionally enshrined right. And fewer than four in 10 students surveyed (39 percent) understood how slavery “shaped the fundamental beliefs of Americans about race and whiteness.”

Examining the teachers’ survey results might help explain why students struggled to answer questions on American enslavement: Educators are struggling themselves. While teachers overwhelmingly (92 percent) claim they are “comfortable discussing slavery” in their classroom, their teaching practices reveal profound lapses. Only slightly more than half (52 percent) teach their students about slavery’s legal roots in the nation’s founding documents, while just 53 percent emphasize the extent of slavery outside of the antebellum South. And 54 percent teach the continuing legacy of slavery in today’s society.

Additionally, dozens of teachers rely on “simulations”—role-playing and games—to teach slavery, a method that Teaching Tolerance has warned against on the grounds that it can lead to stereotypes and oversimplification. Meanwhile, a large majority—73 percent—use “slaves” when talking about slavery in the classroom instead of “enslaved persons” (49 percent), the latter term of which has gained favor for emphasizing the humanity of those forced into bondage.

The overwhelming majority of teachers who participated in the survey (90 percent) are somehow affiliated with Teaching Tolerance and its learning materials. Costello said this suggests the problems revealed in the survey results could be much more pervasive than the findings suggest. “If anything, I think [this collection of survey respondents] is a group that’s more sensitive to issues of race, more likely to confront them in classrooms” compared to the broader teacher workforce, she explained, adding that the findings are “a silhouette of the problem.” Similarly, many of those surveyed were elementary-school teachers, which Costello said was noteworthy considering the ability of slavery education in the early grades to form the narrative—the “fake history”—that students carry through high school.

Ursula Wolfe-Rocca, a high-school U.S.-history teacher in Lake Oswego, Oregon, a Portland suburb, has encountered students’ common misconceptions—such as the belief that Abraham Lincoln freed the slaves, and that the Civil War was really about states’ rights. Her straightforward solution is assigning original documents: “Read Lincoln’s first inaugural address and you do not find a fiery abolitionist, but someone promising to enforce the fugitive slave clause; read the articles of secession, and you find striking declarations from slave states that their actions are rooted in a desire to protect [slavery].”

Still, Wolfe-Rocca echoed the report’s teacher respondents in stressing the inherent challenges in tackling the subject well. As a white teacher, she admittedly struggles with presenting an unsanitized version of slavery that doesn’t desensitize her students at Lake Oswego High School to the violence and black pain. “Kids walk into my class ‘knowing’ about slavery. But their recitation of this knowledge is dull, lifeless, and bored,” she said. “It has the feel of something memorized [and] rote, rather than internalized and meaningful.” She uses personal narratives of enslaved people to teach the ugliness and injustice of the past while being “careful to keep the rape and whipping to a minimum.”

Wolfe-Rocca aims to strike a delicate balance, but she wonders whether she’s whitewashing history: “How do we surface the realities of slavery without resorting to spectacle?” Like teachers cited in the report, she finds that exploring the true costs of slavery is difficult but essential.

Further compounding teachers’ difficulties is the quality of textbooks and state content standards. Teaching Tolerance found that textbooks generally lacked comprehensive coverage of slavery and enslaved people—the best textbook earned a score of 70 on the project’s rubric of essential elements for bringing slavery into the classroom—and state standards were generally “timid,” focused more on abolitionists than on the everyday experiences of slavery.

Taken together, the study exposes a number of unsettling facts about slavery education in U.S. classrooms: Slavery is taught without context, prioritizing “feel good” stories over harsh realities; slavery is taught as an exclusively southern institution, masking the complicity of northern institutions and citizens in America’s slave-based economy; slavery is rarely connected to white supremacy—the ideology that justified its perpetuation; and slavery is seldom connected to the present, drawing the arc from enslavement to Jim Crow, the civil-rights movement, and the persistence of structural racism.

LaGarrett King, an assistant professor of social-studies education at the University of Missouri, served on the Teaching Tolerance advisory board that developed a framework for teaching American slavery—basically, the concepts that every graduating high-school senior should know—as part of the report’s recommendations. As a teacher educator, he said the study fills a significant void.

Students training to be teachers, especially those being educated to teach in elementary schools, know little about the history of slavery, he stated, noting that “much curriculum and teaching around racially and ethnically diverse [people] features a fun—foods and festival—approach to learning.” By contrast, King said, the framework provides a guide to delve into topics such as slavery and black history with a thorough and academically sound approach, versus teaching slavery in reductive and superficial ways.

“Can you teach slavery without it being psychologically violent to the children? The answer is no, violence will occur and is expected,” he said. “The key is the recognition of white supremacy and [of] the humanity of black people that helps aid in the complexity of the subject.”

Relatedly, the study also drew attention to teachers who struggle to have open and honest conversations in mixed-race classrooms about the atrocities of slavery. Antoinette Dempsey-Waters, a black social-studies educator at Wakefield High School in Arlington, Virginia, said she relies on autobiographies to give a vivid picture of enslavement that helps all students in her highly diverse school “walk away with the knowledge of the evil of slavery,” as they come to “understand and respect … the fight for freedom” waged by enslaved people.

“It’s clear that the United States is still struggling with how to talk about the history of slavery and its aftermath,” the report concludes. “The front lines of this struggle are in schools, as teachers do the hard work of explaining this country’s history and helping students to understand how the present relates to the past.”