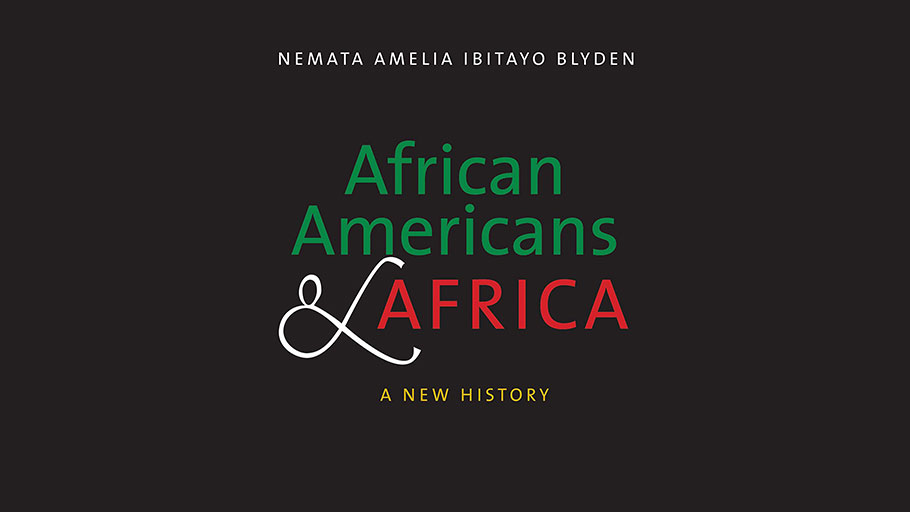 African Americans and Africa: A New Book about Black America’s Relationship with the Continent

You Are Here: Home » Blog » News & Current Affairs » African Americans and Africa: A New Book about Black America’s Relationship with the Continent

Blyden has filled a gap in the scholarship on the relationship between African Americans and Africa by offering a synthetic narrative that contextualizes African American history firmly within the history of the African Diaspora. —Jeannette Eileen Jones, University of Nebraska–Lincoln

AAIHS Editors: Books have creation stories. Please share with us the creation story of your book — those experiences, those factors, those revelations that caused you to research this specific area and produce this unique book.

Nemata Blyden: I suppose the creation story for this book is simply my personal history. Being born to an “African American” mother and an “African” father (a more complex story readers will discover), made it inevitable that I would be interested in this subject. As a child I interacted with my Black American and Sierra Leonean relatives, coming to understand the history of both places. Although I am American born, my formative years were spent on the continent. My adult life has been shaped by living in a country with a complicated racial history. I moved to this country as an 18 year old with the sensibilities of an immigrant, having to learn elements of American culture. I came to understand America’s racial hierarchy and its norms, and experienced racism of the kind that exists only in this country.

In college I noticed the so-called divide between “Africans” and “African Americans,” while easily straddling both communities. This allowed me to understand the major differences between them, and to recognize that their historical experiences, while comparable in some respects, were radically different in others. From my vantage point, I also saw similarities that neither group would have recognized in each other.

However, the impetus for the book came from an incident in Texas many years ago. It was around 1994 that a Black family in Plano, Texas woke to find “Go Back to Africa” spray-painted on their garage. I remember wondering, “Where in Africa are they expected to go?” — this family whose ancestors might have been enslaved centuries ago, and whose blood and sweat had built this nation? Where was this family, that had earned the right to call itself American, to go? In my bid to answer these questions, I set about exploring the history of Black Americans, trying to understand how Africa figured in their understanding of their relationship to the United States. In 1996 I designed and taught a course, African Americans and Africa: Links in History. I suppose I finally wrote this book as a text for that class, but realize now how timely a topic it is. We are arguably in a moment when Black people are facing challenges to their right to belong. African Americans have a long, tangled, and sometimes problematic relationship with the United States, which over the centuries has bound them in various ways to Africa. The book explores the ebbs and flows of that relationship.

Nemata Blyden is an Associate Professor of History and International Affairs at The George Washington University. She holds a BA in History and International Relations from Mount Holyoke College, and an MPhil and PhD from Yale University. Dr. Blyden specializes in African and African Diaspora history. Her new book, African Americans and Africa: A New History (Yale University Press), provides an introduction to the relationship between African Americans and the African Continent from the era of slavery to the present. It examines the diversity of African American identities through relationships with region, ethnicity, immigration, and slavery to investigate a fundamental area of African American studies. She is the author of West Indians in West Africa, 1808-1880: A Diaspora in Reverse (University of Rochester Press, 2000). Professor Blyden was a consultant for In Motion: The African American Migration Experience for the Schomburg Center for Research in Black Culture (New York Public Library). Professor Blyden has lived in Africa, Europe, and the Soviet Union. Follow her on Twitter @BlydenNemata.