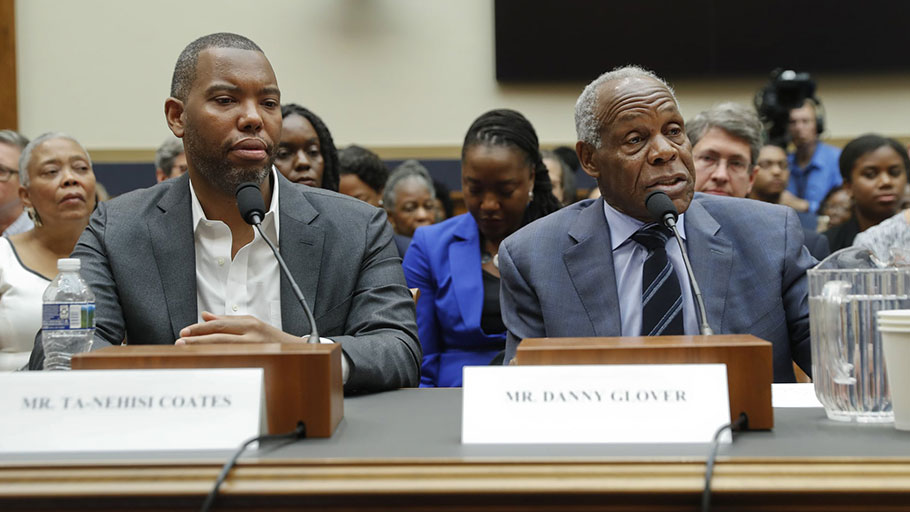 You Are Here: Home » Blog » Reparations » One city’s reparations program that could offer a blueprint for the nation

The actor Danny Glover, right, testifies before Congress about reparations alongside the author Ta-Nehisi Coates. Glover appeared at a town hall in Evanston to discuss the same issue. Photograph: Pablo Martínez Monsiváis/AP

Evanston, Illinois, is levying a tax on newly legalised marijuana to fund projects benefiting African Americans in recognition of the enduring effects of slavery and the war on drugs

By Eric Lutz, The Guardian —

For years, Robin Rue Simmons watched Evanston, Illinois, “working hard” to resolve its racial disparities – but with little to show for its efforts.

“Our gaps were widening,” the city alderman told the Guardian, citing the Chicago suburb’s declining black population and other issues. “I thought we were being delusional to continue in the same vein and believe we would bridge the gap.”

So, Rue Simmons began plotting a new, stronger approach to addressing racial inequality in Evanston: a local reparations for slavery program for African Americans, similar to those proposed on the federal scale.

Developed in concert with Evanston’s Equity and Empowerment Commission and overwhelmingly approved by the city council late last year, the program is perhaps the first of its kind in the nation: an initiative designed to address the ongoing impacts of slavery on African Americans, with guaranteed funding from sales taxes on recreational marijuana, which became legal in Illinois on 1 January.

The town’s newly formed reparations committee is still evaluating ways in which it will spend the money, which it aims to begin disbursing later this year or early next.

But the novel program, which proponents say could become a model for other communities and even the gigantic federal government itself, could effectively help address two historical injustices that continue to affect black Americans: the institution of slavery and the war on drugs.

The program represents “hope that we will have a fair opportunity to live to our highest and best potential, and enjoy the same livability as the average white resident in Evanston”, Rue Simmons said. “It means that there is an opportunity coming for us to bridge the gap of discrimination that has and continues to keep black residents oppressed.”

Rue Simmons began spearheading efforts to establish a reparations program in February 2019, after growing frustrated that the large, diverse suburb bordering Chicago to the north had seen its inequality gaps increase, despite efforts by the liberal college town’s inclusion work.

“I did not see much progress,” she said, citing growing disparities in wealth, life expectancy and education in the city, home to Northwestern University.

She began discussing such a measure with the Equity and Empowerment Commission, and began holding community meetings on the subject over the summer after passing a resolution “affirming the city’s commitment to end structural racism and achieve racial equity”.

Among those meetings was a December town hall featuring the actor and activist Danny Glover, as well as the Cook county circuit court judge Lionel Jean Baptiste – a former Evanston alderman who had pushed for reparations years earlier.

“It was encouraging that we’d been there before,” Rue Simmons said of a previous resolution before the city council expressing solidarity with HR-40 – the congressional reparations study bill championed by the late John Conyers and Sheila Jackson Lee, both Democratic representatives. “But there were no action items attached to that resolution.”

The city council voted 8-1 in November to approve a plan to establish a reparations program, with 100% of the sales tax revenue from recreational marijuana in the city going to the initiative. According to Alderman Ann Rainey, it’s that secured funding that sets the Evanston program apart from other governments that have discussed potential initiatives.

“This is a huge deal,” said Rainey, who sits on the reparations committee with Rue Simmons.

Under the plan, up to $10m from cannabis tax revenue will go directly into the reparations fund over the next 10 years – though Rainey suggested to the Guardian that the city may hit that $10m sooner, based on the high demand for marijuana since it became legal here earlier this month. Long lines have formed outside dispensaries in Chicago, Evanston and elsewhere in Illinois in the new year; sales brought in close to $11m statewide in the first week alone.

Rainey also told the Guardian that the program could receive additional forms of funding, including from banks and other institutions.

How precisely the funds will be put to use is not yet clear; the committee is currently receiving guidance from experts and organizations, including the National Coalition of Blacks for Reparations in America, and seeking out additional community input.

However, Rue Simmons hopes to prioritize housing initiatives aimed at addressing the impact of redlining on the suburb’s black community, as well as programs related to education, employment and healthcare.

A timeline on the Evanston city website suggests reparations programs will officially begin later in 2020 or early 2021, though Rue Simmons told the Guardian she hopes the committee can begin taking action sooner.

Rue Simmons said the initiative has led to some hate messages from white supremacists. The alderman also said some in Evanston “remain hopeless that we will never get the repair” despite the initiative.

But, Rue Simmons said, support in Evanston has been strong overall – and leaders of other communities have expressed “enthusiasm” for the city’s work. “There is a new day in our immediate future for black Evanston, and therefore a better Evanston overall,” she said.

Kamm Howard, a co-chair and midwest regional representative for pro-reparations group N’Cobra, expressed hope that Evanston’s program will lead to other communities taking up similar initiatives.

Evanston’s example, according to Howard, has also undercut a common talking point put forth by critics of reparations – that such measures would be divisive. “We saw that it doesn’t have to divide America,” Howard said. “Because it didn’t divide Evanston along racial lines.”