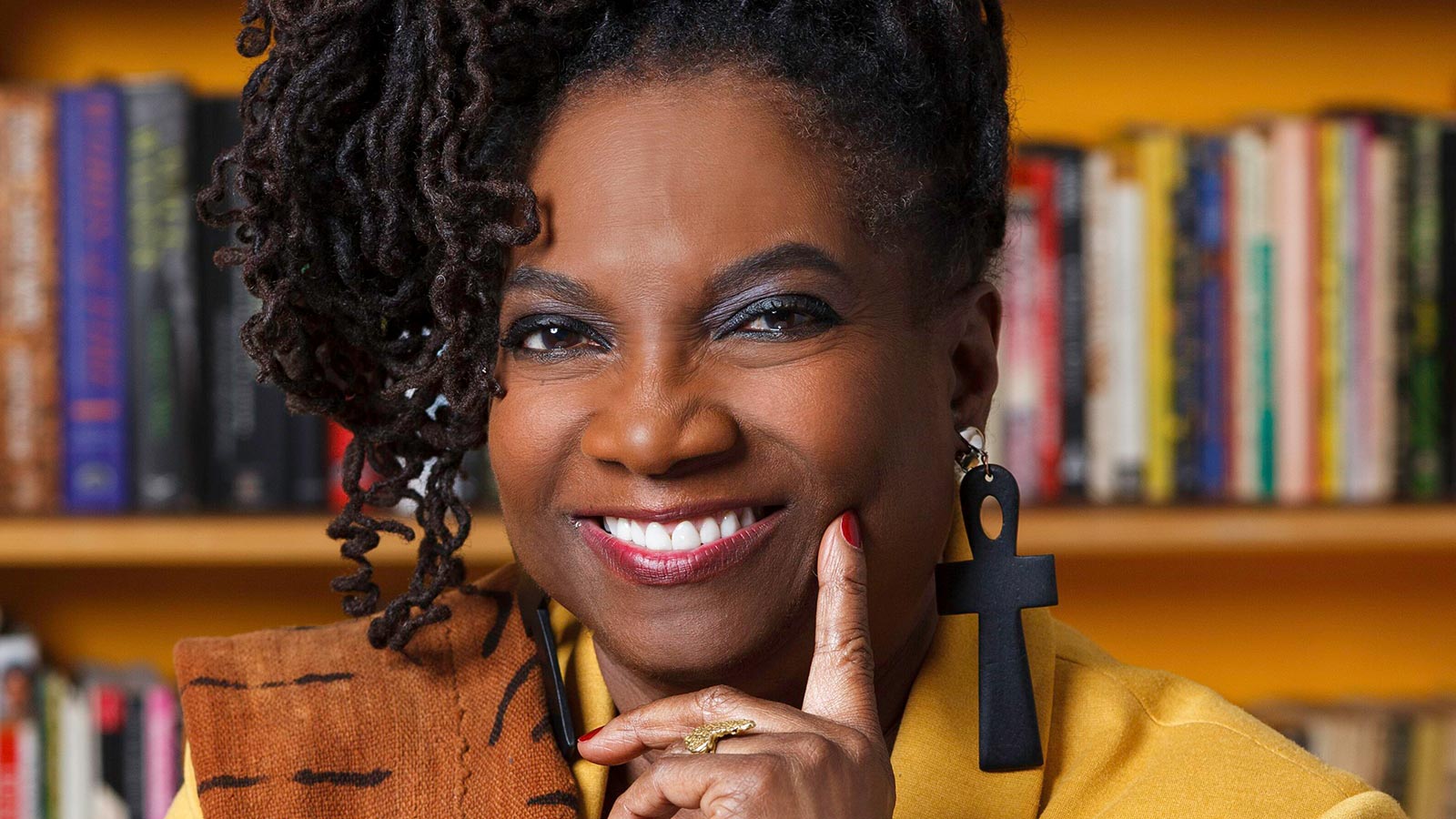 “The Taifa Trilogy,” Nkechi Taifa’s Three Africentric Children’s Classics are Back in Print

Nkechi Taifa, internationally renowned human rights activist and lawyer, founder, principal and CEO of The Taifa Group and the author of her top-selling, acclaimed memoir Black Power, Black Lawyer, announced today that she has reissued three of her popular children’s books—Shining Legacy, The Adventures of Kojo and Ama and Three Tales of Wisdom.

“I am so proud to bring these books back on the market for a new generation to enjoy,” she said. “Although there are many choices for Black parents today, we are still awash in erroneous mass media images that project white supremacy. I believe my books will do what they did in the 1980s and 1990s—promote Black pride and positive values and a sense of accomplishment that youth across the African Diaspora, as well as children from other cultures, will want to emulate.”

Shining Legacy, originally published in 1983, highlights twelve Black heroes and heroines through moving stories accentuated with rhyme; and The Adventures of Kojo and Ama, originally published in 1992, contains wisdom-filled stories combining excitement, fun and suspense with lessons in pride and heritage. Three Tales of Wisdom is Taifa’s own creation of modern-day folktales designed to stimulate the imaginations of Black children.

Here are descriptions of the books: 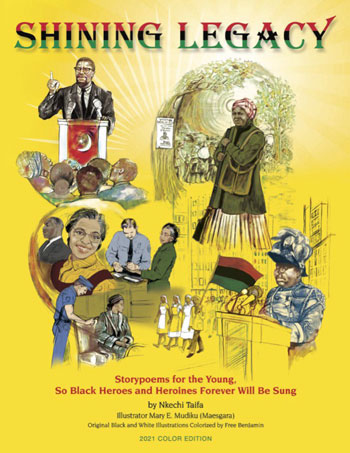 Shining Legacy is perfect for the young and elder alike, in both family and classroom settings. Taifa’s extraordinary and original storytelling celebrates history, heroes and heroines of the past through dramatic epic, ballad, legend and saga, all accentuated with moving and rhythmic rhyme. Role models range from Harriet Tubman, Rosa Parks, Fannie Lou Hamer and Sojourner Truth, to Malcolm X, Denmark Vesey, Toussaint L’Ouverture, and Marcus Garvey, and more.

Kojo and Ama’s seven adventures combine excitement, fun and suspense with lessons in pride and heritage. The children’s heroic black cat Sheba brings them good luck as they find themselves in settings ranging from an inner-city park to the deep South, and from the island of Jamaica to ancient Egypt.

In Three Tales of Wisdom, Anansi’s magic helps Ayanna get to the Harvest Festival, despite the fact that her two sisters fail to follow the Seven Principles of the value system. Elsewhere in the book, a young brother growing up in New York City learns the story of the mighty Marcus Garvey. In the third story, Jabari finds wisdom through his encounters with spiders, lions, warriors, elephants, cockroaches, camels and birds. And as an extra treat, a potpourri of African Proverbs provide food for wise thought and action. 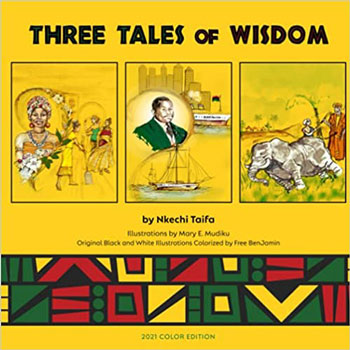 Taifa said she had been preparing these books for re-publication, when last year’s “racial reckoning” occurred. The aftermath of the 2020 police murder of Breonna Taylor and George Floyd and millions of people taking to the streets in protest around the world, gave new attention to the problems Blacks have historically faced in America. This scrutiny has extended to Black parents wanting to share with their children the positive power of their racial heritage.

“The Ancestors were really working with me on the timing of this re-issue,” she said. “We are not victims— “we are our own liberators,” she said, echoing the words of former political prisoner Jalil Muntaqim. “My books unequivocally show this.”

Indeed, her books do such a brilliant job highlighting Black pride and power that they were banned by the Central York, Pennsylvania school board earlier this summer.

“That move revealed to me the impact that Shining Legacy, which during its original publication also included the three stories now in Three Tales of Wisdom, has had on society, and the threat it poses—to continue to directly influence our youth.”

Info on the author and her books, published by the House of Songhay II, can be found at https://www.nkechitaifa.com/.

Nkechi Taifa is Founder, Principal and CEO of The Taifa Group LLC, a social enterprise firm whose mission is to advance justice. Taifa, who regularly publishes Op-Eds and longform essays on current events on the popular and influential Medium.com journalism platform, convenes the Justice Roundtable, a broad network of advocacy groups advancing progressive justice system reform and serves as a Senior Fellow at the Center for Justice at Columbia University. Her fifth book, on the status of the reparations movement in America, will be published in early 2022. A proud native and resident of Washington, D.C., she is equally-proud of being the mother of an adult daughter, Mariama Taifa-Seitu.

Visit us on social media: 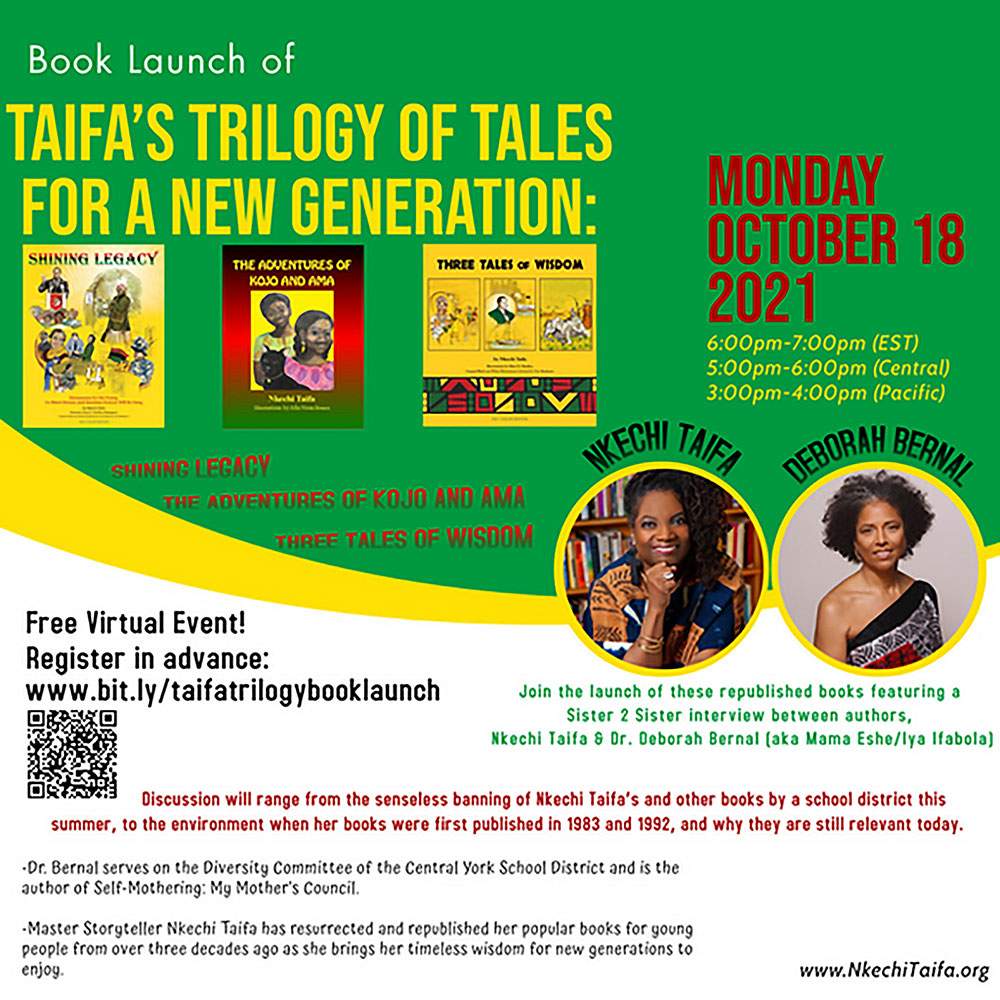