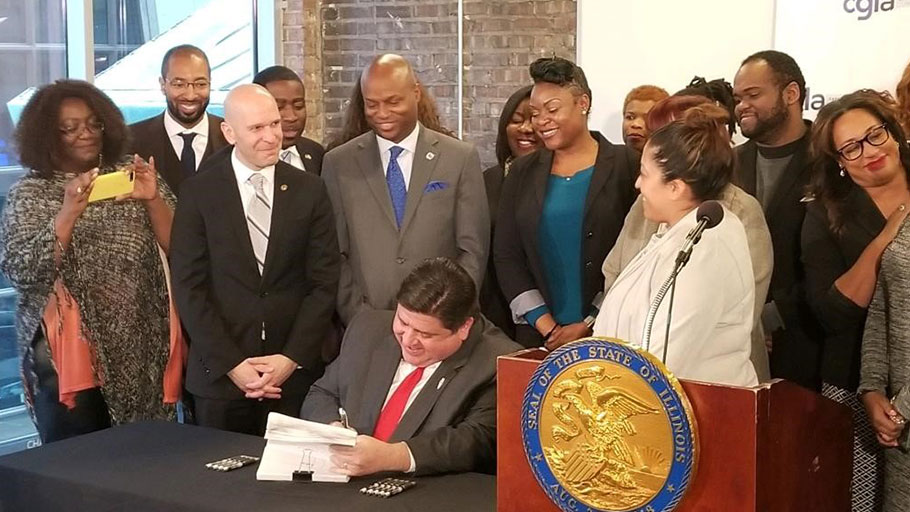 Surrounded by dozens of criminal justice reform advocates and lawmakers at Cabrini Green Legal Aid, Governor JB Pritzker signed legislation today to strengthen the most equity-centric adult-use cannabis law in the nation and announce the first round of social equity applications opens on Tuesday, December 10.

“Illinois’ challenges are unique because we forged our own path,” said Governor JB Pritzker. “When the calendar hits January 1, we’ll be celebrating only the beginning of this new era. A few years from now, we’ll be celebrating that we’ve actually done what no other state has: addressing not just the injustices of the past, but the equity of the future.”

“With this new law, we are not just leaving behind harmful policies, but also committing to making amends for them,” said Sen. Heather A. Steans (D-Chicago). “The changes in this legislation came about because we were able to work quickly to address concerns about some of the specific ways the new law will be applied. As cannabis production and sale become legal industries, we need to stay in the mindset of studying, listening, and responding quickly to ensure that we have smart and just enforcement.”

“This bill continues to center medical cannabis patients by removing the onerous and discriminatory flags on driving records,” said Rep. Kelly Cassidy (D-Chicago). “I’m pleased to say that we’ve taken this step as well as being the first state in the country to require patient access to be prioritized when shortages occur. Every state has seen shortages and challenges at roll out and I applaud the Pritzker administration for the steps and the continued focus on addressing concerns in this area.”

“The adult-use cannabis market in Illinois will quickly become the most diverse in the nation because we put equity at the forefront when crafting this historic law,” said Rep. Jehan Gordon-Booth (D-Peoria). “Communities that have suffered from the discriminatory laws under prohibition will help build a new market in Illinois and endless opportunities for countless entrepreneurs of all backgrounds, but with emphasis on people impacted by the failed War on Drugs.”

“It is important for the state to make sure the process is thoroughly planned out, socially equitable and allows equal economic opportunities for minority communities so we can invest in our local neighborhoods and create good paying jobs starting on January 1st,” said Rep. Celina Villanueva (D-Chicago). “The legalization of cannabis took words and put them into action, and it gives us the ability to right past wrongs done primarily to minority communities by the War on Drugs, provide real criminal justice reform and lift up disinvested communities by helping create new opportunities for local, minority-owned businesses.”

“I’m proud to be a part of the team that will cement equity in this industry in a way that no other state has seen,” said Toi Hutchinson, Senior Advisor to the Governor for Cannabis Control. “The people who have been working for years behind the scenes to make this happen – we did it because we had an unquestioned understanding of what this did to our communities. I’m going to work every single day to ensure that those who have been disproportionately impacted by drug policies have the opportunity to start businesses and thrive here in Illinois.”

“Illinois’ historic cannabis law puts social equity above all else, and the result will be a market unlike that in any state in the nation – one that rights the wrongs of the past by offering new opportunity to communities that have been torn apart,” said Esther Franco-Payne, executive director of Cabrini Green Legal Aid. “From ownership to jobs to expungement, disproportionally impacted communities will be revitalized when this law takes effect on January 1 and as the industry flourishes in the years to come.”

Senate Bill 1557 also includes stronger provisions to prevent conflicts of interest among elected officials and provides more information to people whose records will be expunged. It takes effect January 1, 2020.

The following are the Governor J.B. Pritzker’s remarks as prepared for delivery:

Eleven states have legalized cannabis for recreational use. They have made progress in their own way — but no other state has done the important work we’re doing here in Illinois, where equity intentionally takes center stage.

Next week, we’ll launch the next phase of this rollout. It’s in this coming phase, one of the most important, that Illinois will really demonstrate our unique commitment to equity: we’ll start accepting applications for a new group of cannabis entrepreneurs, including social equity applicants, on this coming Tuesday, December 10th. Applicants have until January 2nd to submit their proposals.

No other state has developed a comprehensive plan to promote social equity, and because of that, we’ve seen a result in those states that we don’t want – an industry that doesn’t reflect diversity or equity. In Illinois, we’re different. Our social equity applicants will be eligible for the 75 licenses that come online in a few months – and they’ll be able to get business loans to get off the ground, funded by the existing industry.

This is the most innovative approach in the nation, and it stands at the core of our objective to deliver long-term sustainable equity at every level of the cannabis market, whether you’re a business owner, a craft grower or a budtender working at a good job that will support a family.

Let me be clear: our goal is not to immediately deliver as much access to recreational cannabis as possible, as quickly as possible. No, what we’re doing here is methodically working to address the inequities that have wreaked havoc on many of our communities.

That’s why Illinois will have a brief start up period, from January until May, to provide the seed capital to social equity applicants. That’s why we’ll open up far more dispensaries headed by social equity applicants in May. That’s why we’ll initiate a disparity study to determine if we’ve achieved the results we wanted, so that when our market is mature and thriving, Illinois will be the first state where the legal cannabis market looks more like the residents of our state.

To date, we’ve licensed 14 medical cannabis cultivation centers to serve the recreational supply chains, while fiercely protecting and prioritizing the supply to medical patients. 30 dispensaries have been approved to sell to adult-use consumers starting in a few weeks —with more to come in the weeks after that. Over time, we project cultivation jobs to double, and new jobs in this industry will number in the thousands.

But by design, the number of shops that will open their doors in just a few weeks is far fewer than the system’s long-term cap of 500 dispensaries statewide. We have slowed down this process to make enough room for social equity businesses to take root. While a few medical dispensaries will be the first shops to open their doors for recreational sales in 2020, they will not be allowed to monopolize the market. We’re capping their expansions to make room in the industry for new entrants who were for too long left out of the conversation. And we’re using the funds from license fees generated by the earliest new dispensaries to support the social equity applicants and help them get a strong start.

Before I introduce our next speaker, I want to touch on one last aspect of this legalization that is so important to our state, and to me as governor. In the coming weeks, we’ll talk more about how we’re going to expunge hundreds of thousands of low-level cannabis records, a burden disproportionately shouldered by communities of color.

That’s a process already set in motion at the state level. Here in Cook County, though she could not be here today, I want to recognize Cook County State’s Attorney Kim Foxx for advocating for justice throughout the legislative process, and for her own innovative partnership with Code for America in delivering conviction relief.

From today’s legislation to our agencies’ work behind the scenes, my administration has been working diligently to shape the face of this new industry—and we possess a deep optimism for what’s to come. Of course, as has been true everywhere that legalization has been rolled out, we expect a lot of demand. At the very beginning, that might mean long waits or lines, but for every minute you wait in line, it’s a sign that there’s a lot more demand for new cannabis businesses – businesses that will come from communities devastated by the war on drugs. It’s a sign of our deliberate phase-in at work. Most importantly for the newcomers to this industry, it’s a sign of all the room for market growth that lies ahead.

And that’s the fundamental truth of what we’re doing here: Illinois’ challenges are unique because we forged our own path. We are the first and only state to fully create this industry through the legislature—the first and only state to address not just the injustices of the past, but the equity of our future. Those applications open on Tuesday, and I want to encourage people across the state to apply.

This article was originally published by the Chicago Defender/Real Time Media.