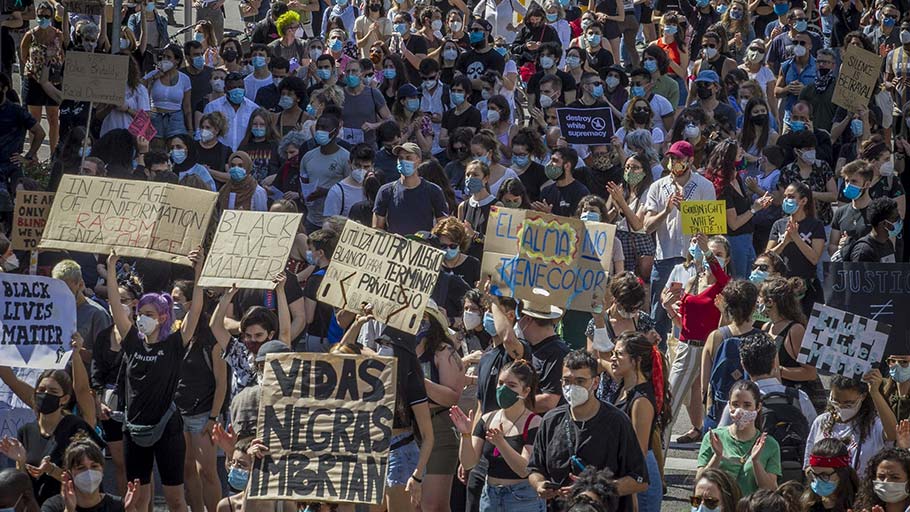 Racism, Xenophobia and Police Brutality on the Rise in Spain

You Are Here: Home » Blog » News & Current Affairs » Racism, Xenophobia and Police Brutality on the Rise in Spain

Rights International Spain and the Implementation Team of the International Decade for People of African Descent in Spain have published a report on racism and xenophobia during the COVID-19 state of alarm in Spain.

The report examines manifestations of racism and xenophobia between March 15 and May 2 during the COVID-19 state of alarm in Spain.

The investigation includes more than 70 racist incidents and institutional discriminatory practices, 45% of which refer to violations affecting a particular group. Madrid is the region with the highest number of complaints (40%), followed by Catalonia (21%) and the Basque Country (8%). The group suffering the largest number of violations is those who identify themselves as Black and/or Afro-descendants (32%), followed by Arab Muslims (30%), Roma (25%) and Latin-American (8%).

Use of racial-ethnic profiling

In a context of strong police presence, there have been numerous complaints about the use of racial profiling. Data collected by SOS Racismo Madrid, which documented 13 instances of police racially profiling people who were on their way to buy basic goods between 15 March and 7 April. This control provoked fear amongst those affected, leading them to self-isolate further, and preventing them from going out to provide themselves with basic goods. In view of this situation, this practice should be made illegal and stop forms that collect objective empirical data, which include ethnicity and nationality, should be used.

About 70% of the respondents of the online survey reported racial profiling before being subject of police brutality. There are also numerous cases of police officers acting violently against people with mental illnesses or disorders. One of these cases, which appeared in the media, occurred in Bilbao. The Ertzaintza (Basque police force) violently arrested a young North African man who was shopping and who suffers from a mental health disorder. They did the same to his mother, when she ran to explain the officers about her son’s condition. All abuse must be investigated promptly and effectively. To do so, guarantees and complaint mechanisms need to be strengthened by creating an independent monitoring and accountability mechanism for all law enforcement bodies.

There are approximately 600,000 people doing domestic and care work, and the vast majority are migrant women. About 30% of domestic workers have no employment contract and thus find themselves in an irregular administrative situation. According to the organization Servicio Doméstico Activo (SEDOAC) [Active Domestic Service], these women are more likely to be identified and fined because they cannot provide a contract to prove the need to go to and from their workplace. The social and economic emergency measures that have been adopted leave out migrant women in a very difficult situation. The Spanish government should ratify the 189th International Labour Organization Convention on Domestic Workers to promote effective protection of their rights.

According to the Sindicato de Manteros [Union of Street Vendors] of Madrid, the vast majority of people working in the street vending sector are in an irregular administrative situation and many of them have stated that, during the lockdown, they have not gone out to carry out permitted activities for fear of police violence and racial profiling. Moreover, their living conditions have been worsened due to the fact that many live in substandard and overcrowded housing, and have on top of that suffered harassment from landlords when they have been unable to pay the rent due to lack of income.

Migrants working in agriculture often do so in exploitative labour conditions, lacking social security. Many of them live in cardboard and plastic shacks. The Huelva team of the Asociación Pro Derechos Humanos de Andalucía [Andalusian Human Rights Association] stressed that it is impossible for these groups to comply with the health measures that have been imposed, since they don’t even have access to cleaning products, waste collection or adequate housing where they can recover or isolate themselves if they become infected. Without measures to control and monitor the compliance of labour rights, their work conditions are inhumane and lack all means of preventing coronavirus infection.

Victims of trafficking for sexual exploitation

Civil society organisations have pointed out that, since the approval of the state of alarm, victims of sexual exploitation have found it much more difficult to access health services, have suffered more violence, and have increased their debt. Likewise, various NGOs have reported that many of these workers have been forced to continue working, regardless of the lockdown, with a high risk of getting COVID-19. Even though the Government Delegation against Gender Violence approved a Contingency Plan against gender violence, which included victims of trafficking, sexual exploitation and other women in the context of prostitution, the measure does not recognize the situation of trafficking of the victims, nor does it offer a comprehensive protection regime for this group. When the victim is foreign and in an irregular administrative situation, they continue to be vulnerable to expulsion from Spain.

Just as racist fake news and hate speech against people of Asian origin have been taking place since the beginning of the epidemic, the Council for the Elimination of Racial or Ethnic Discrimination reports that anti-Roma hate speech has also been widely disseminated through social media and instant messaging. They highlight the stigmatizing treatment by some media of the origin and spread of COVID-19 or of alleged breaches of quarantine, alluding to the ethnic origin of the people involved. Hate crimes must be investigated quickly and effectively.

Suspension of administrative, police and judicial procedures for foreign residents

Both the closure of public administrations, as well as the suspension of international protection procedures and minimum justice services, without providing an alternative for the more vulnerable cases, have provocked cases of defencelessness and lack of access to rights, in particular the right to asylum. Moreover, the impact on access to economic and social rights for migrants whose administrative situation is irregular, has become evident with the closure of the administrations that register their stay in the municipalities where they reside. The administrative situation of migrants in Spain must be regularized, guaranteeing their full rights and allowing them access to health and decent housing under equal conditions.

Several organizations have reported that during the state of alarm, the fundamental rights of refugees and asylum seekers have been restricted for public health reasons. The NGO Coordinadora de Barrios denounced the conditions of 55 people in Melilla who had come to the city seeking asylum and were housed by the regional government in tents that lacked thermal insulation, air-recycling systems or the necessary security and sanitary conditions in a pandemic. The NGO Tunisian Forum for Economic and Social Rights reported that 1,650 people have been living for months in the Centre for Temporary Stay of Immigrants (CETI) in Melilla, which has a maximum capacity for 782 people. These included asylum seekers, pregnant women, minors and people with illnesses and special needs.