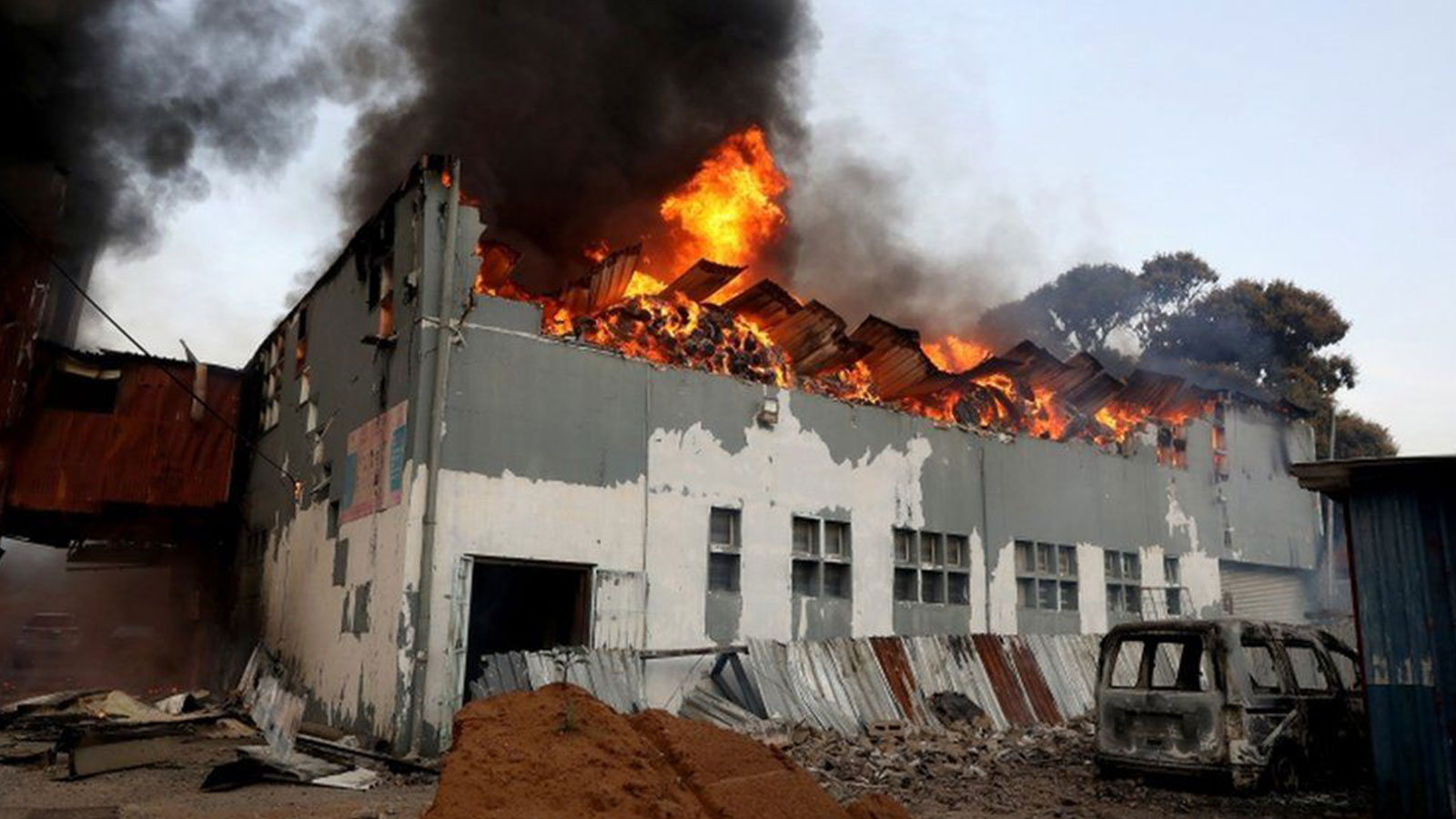 At least 45 people have now died in the violence that has been engulfing parts of South Africa since the jailing of former President Jacob Zuma last week.

This includes 10 people killed in a stampede during looting on Monday night at a shopping centre in Soweto, the country’s biggest township.

Almost 800 people have been arrested in the unrest that began last Thursday and turned violent over the weekend.

The military has now been deployed to help the overstretched police.

President Cyril Ramaphosa has called it some of the worst violence witnessed in South Africa since the 1990s, before the end of apartheid, with fires set, highways blocked and businesses looted in major cities and small towns in KwaZulu-Natal and Gauteng provinces.

Police Minister Bheki Cele told journalists on Tuesday that, if the looting continued, there was a risk areas could run out of basic food supplies.

However, Defence Minister Nosiviwe Mapisa-Nqakula said there was not yet a need to declare a state of emergency over the violence.

KwaZulu-Natal Premier Sihle Zikalala said some 26 people had been killed in the province so far. In Gauteng the death toll is 19, including the 10 who died at the mall in Soweto.

The BBC’s Vumani Mkhize says several shopping centres in the township – once home to Nelson Mandela – have been completely ransacked with ATMs broken into, restaurants, bottle stores and clothing shops all left in tatters.

Soldiers, working with the police managed to catch a few rioters, but law enforcement remains heavily outnumbered, he says.

In KwaZulu-Natal – where livestock has also been stolen – the unrest continues with ambulances even coming under attack by rioters in some areas, South Africa’s TimesLive news site reports.

Officials have accused some groups of taking advantage of the anger over Zuma’s imprisonment to commit criminal acts, while others have said anger over unemployment and poverty are fuelling the chaos.

But Mr Cele warned that “no amount of unhappiness or personal circumstances from our people gives the right to anyone to loot, vandalise and do as they please and break the law”.

He also revealed they were investigating 12 people for inciting violence.

There has been some concern over fake news online fuelling the unrest, while the governing African National Congress (ANC) had already revealed it was looking into tweets sent by Zuma’s daughter, Duduzile Zuma-Sambudla.

Zuma was convicted of contempt of court last month after failing to attend an inquiry into corruption during his presidency.

The 79-year-old, who denies corruption, was given a 15-month prison sentence. He handed himself to police late on Wednesday.

He is hoping to get the sentence rescinded or reduced by the country’s constitutional Court. However, legal experts say his chances of success are slim.

Analysis: What’s behind the riots?

The catalyst was the arrest last week of Zuma, with his supporters blockading major roads – the economic arteries of the nation – as they demanded the release of their political hero.

Low income levels and unemployment – standing at a record high of 32.6% among the workforce and even higher at 46.3% among young people – are seen as the ticking bombs that have exploded.

Many South Africans have been shaken by the riots that have swept through Zuma’s political heartland of KwaZulu-Natal and the economic hub of Gauteng.

And many feel that his successor as president, Cyril Ramaphosa, has failed to provide decisive leadership – either to calm anger over Zuma’s imprisonment or to reassure South Africans that they will be safe.

Mr Ramaphosa was accused of belatedly deploying troops – and only 2,500 of them compared with the 70,000 he deployed to enforce a nationwide lockdown to curb the spread of Covid-19 last year.

But there is no agreement over the deployment – the Economic Freedom Fighters (EFF) opposition party has opposed it, saying the solution lay in “political intervention and engagement with our people”.

Many residents in affected areas have remained at home, and some have formed what local media call “defence squads” to protect their neighbourhoods and businesses as looting and burning continues.

There is no doubt that the unrest is the biggest security challenge that Mr Ramaphosa has faced since he became president in 2018 after ousting Zuma. It is bound to worsen the economic crisis, already hit by the pandemic, as many businesses, including shops, warehouses and factories, have been destroyed.

Video footage shows that even a blood bank was looted in the coastal city of Durban, as Mr Ramaphosa addressed the nation on Monday night. 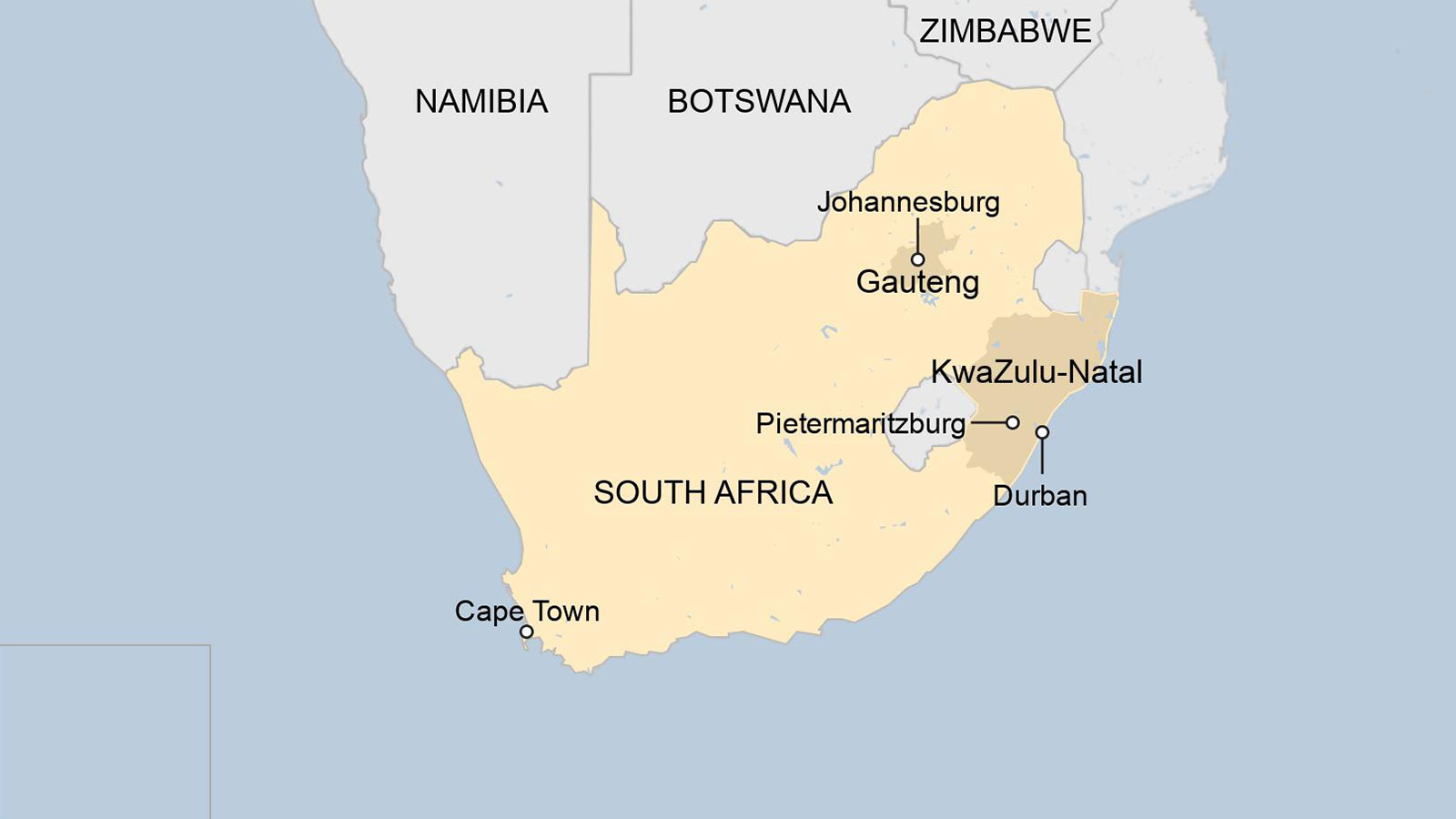