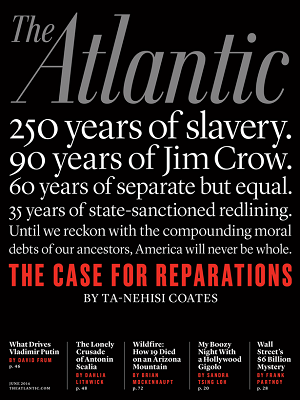 Ta-Nehisi Coates and the boundaries of legitimate debate

You Are Here: Home » Blog » News & Current Affairs » Ta-Nehisi Coates and the boundaries of legitimate debate

At the Sixth and I synagogue in Washington on Thursday night, people were reselling tickets out on the street as if a playoff game was taking place inside, rather than a talk by Ta-Nehisi Coates, a national correspondent for the Atlantic. The subject of the event was Coates’s recent cover story for the magazine, “The Case for Reparations,” which has broken traffic records and vanished from newsstands.

While the piece is popular, the turnout for Coates and the reception he received in the sanctuary reflected something larger than the enthusiasm for a single article. “The Case for Reparations” managed to revive and reframe a major policy debate about race in the United States. But the piece is part of a larger project, a redefinition of what counts as a legitimate conversation about race in the United States and an attempt to define what intellectual credentials are required to enter that debate.

At Sixth and I, Coates recalled what the standards were when he was in college.

“Being a student at Howard University and reading the New Republic … picking up this magazine which does what you hope to one day do, opinionated, long-form articles with reporting, and watching them talk about black people, and having no black people on staff, having no black people in the room … Do you think they’re genetically stupid?” he mused, remembering a fabricated piece that magazine published that suggested African Americans were uninterested in blue-collar jobs like driving taxis and its role in advancing Charles Murray’s work on race and intelligence.

Coates has had a long career in journalism, but he made his debut in the Atlantic in 2008 with a feature on Bill Cosby’s gospel of black male responsibility that is really a long meditation on the persistence, and persistent inefficacy, of respectability politics — the idea that a minority group can evade structural disadvantages and ingrained prejudice through self-improvement.

“Racism is a kind of fatalism, so seductive, that it enthralls even its victims,” he wrote this January after the Seattle Seahawks’ Richard Sherman, a Stanford graduate, was labeled as a thug after giving a fired-up sideline interview. “But we will not get out of this by being on our best behavior—sometimes it has taken our worse. There’s never been a single thing wrong with black people that the total destruction of white supremacy would not fix.”

The campaign to eradicate respectability politics is not yet complete. The first question put to Coates at Sixth and I was why he had not written about fatherlessness in “The Case for Reparations.” But when the Atlantic’s Jeffrey Goldberg, who was moderating the panel, posed the question of black culture, Coates’s response laid out the case for a major shift in focus.