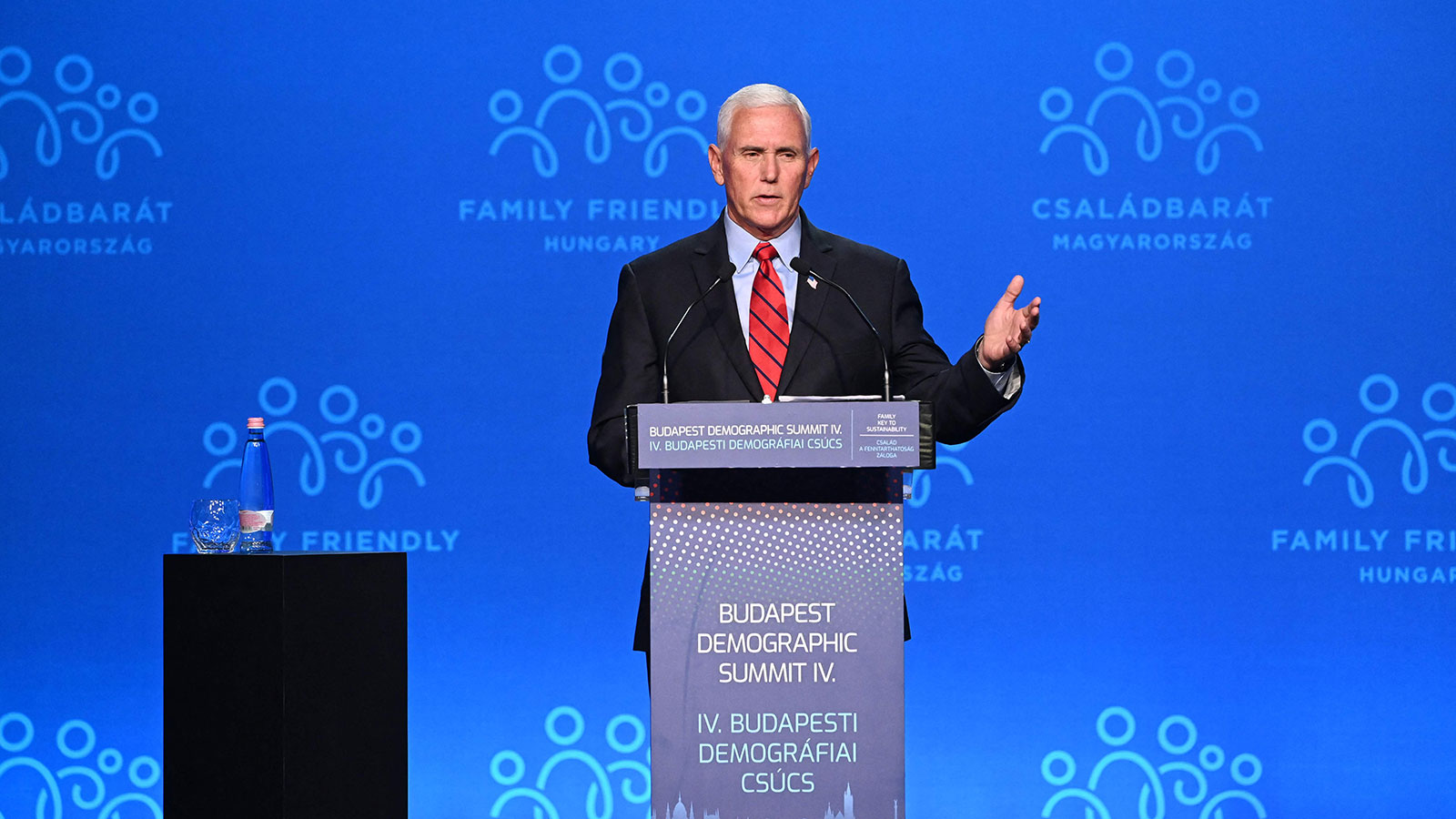 What was once a notional solidarity between nationalists on both sides of the Atlantic is turning into something more durable.

Toward the end of last month, a major right-wing summit in Hungary had a conspicuous guest. Former vice president Mike Pence joined Hungarian Prime Minister Viktor Orban and a coterie of other illiberal, nationalist leaders from the continent in a two-day conference in Budapest on “family values” and demographics. The forum, which began in 2015, is one of the spaces where Orban champions his brand of Christian nationalism — raging against Western liberalism, non-European migration and LGBTQ culture.

“Hungary must defend itself because the Western left wing is attacking,” Orban said. “It is trying to relativize the notion of family. Its tools for doing so are gender ideology and the LGBTQ lobby, which are attacking our children.” He went on to sign a declaration along with the right-wing leaders of Poland, the Czech Republic and Slovenia that insisted “increasing the number of European children is essential to preserving Europe’s Christian culture and other religious traditions for future generations” and warned European Union officials that “migration should not be seen as the main tool to tackle demographic challenges.”

Pence was happy to play his part. “We see a crisis that brings us here today, a crisis that strikes at the very heart of civilization itself,” he said, echoing fears over the “erosion of the nuclear family, marked by declining marriage rates, rising divorce, widespread abortion and plummeting birthrates.” He used his moment in Budapest to cheer on theU.S. Supreme Court, whose conservative majority may eventually overturn federal protections around abortion rights.

The former vice president is hardly alone in seeing Hungary as a source of encouragement in a broader ideological battle gripping the West. Prominent conservative American commentators, chiefly Fox News host Tucker Carlson, have had audiences in Budapest with Orban, who ranks as one of the E.U.’s longest-ruling leaders. Next year, Budapest will host an iteration of the Conservative Political Action Conference, the main annual gathering of the American right.

“Orban shows how the switch to illiberalism can be done,” wrote Edward Luce of the Financial Times, detailing how the Hungarian leader went from being a small-l liberal to a would-be autocrat, subverting his country’s democracy to stay in power while waging a relentless culture war. “The libertarian philosophy had been replaced by the politics of resentment,” Luce added. “European identity made way for talk of defending Hungary’s Christian civilization. The new Orban was an enemy of independent media, courts and universities. He also became Europe’s chief scapegoater of immigrants.”

But this deepening engagement extends well beyond Hungary. One of the striking transatlantic developments of the past half-decade — marked by the rise and fall and potential re-emergence of President Donald Trump — has been the overt collaboration between right-wing politicians and activists in the United States and counterparts in Europe, particularly those on the far right.

Some of these efforts border on the comical, such as former Trump adviser Stephen K. Bannon’s quixotic mission to build a united far-right front in Europe along Trumpist lines. But a greater symbiosis is underway, with more and more prominent figures seeing themselves as part of a joint struggle.

“Trumpism has had a very important influence, not just in America, but also in Europe and Spain,” Manuela Carmena, a retired judge and former leftist mayor of Madrid, told the New York Times. In France, Spain and various other countries in Europe, politicians of various stripes have located themselves within American-style culture war battles over identity politics and how to think about one’s own national history.

In a separate interview with the Times, Éric Zemmour, a rumored far-right candidate for the French presidency who has surged in opinion polls, welcomed the links to Trump. “Obviously, there are common points,” he said. “In other words, someone who is completely from outside the party system, who never had a political career and who, furthermore, understood that the major concerns of the working class are immigration and trade.”

These are bonds that don’t have many similar parallels on the left; a visiting Western European social democrat in Washington, who spoke on the condition of anonymity, quipped last month to Today’s WorldView that the Democratic establishment in the United States would find greater kinship with her center-right rivals than with her own center-left party.

The Republican Party has lurched towards populism and illiberalism https://t.co/mcALXLjZ6B pic.twitter.com/lJmOnHLVOm

The Republican Party of the United States is, in global terms, a far-right party. The V-Dem Institute, a think tank based at the University of Gothenburg in Sweden, maintains an index charting hundreds of political parties from 169 countries on a shared political spectrum that has mapped the party’s trajectory. In this view, the Republicans’ ultranationalist turn over the past two decades, crystallized by the rise of Trumpism, has shifted them closer to authoritarian-leaning factions in power in countries like Hungary and Turkey and made them even more illiberal than far-right parties in Western Europe, like France’s National Rally or Spain’s Vox.

Over the weekend, Sen. Ted Cruz (R-Tex.) beamed in virtually to a rally in Madrid held by Vox and spoke glowingly of the “shared values” between him and Vox leader Santiago Abascal, whose party espouses a virulent anti-immigrant, anti-Muslim and anti-feminist agenda, has attacked Pope Francis over the pontiff’s rhetoric about the sins of Spanish colonialism in the Americas, and engages in borderline nostalgia for the era of the country’s fascist dictatorship.

Cruz told his audience that the collective goal should be to “promote and defend the principles that underpin our vision of a world where people who share our principles can thrive.” Left unspoken is what should happen to those who don’t share these “principles.”

When asked by Today’s WorldView for further clarity on Cruz’s remarks, connections to Vox and his views about its politics, a spokesperson from Cruz’s office said: “The Senator’s statement speaks for itself.”