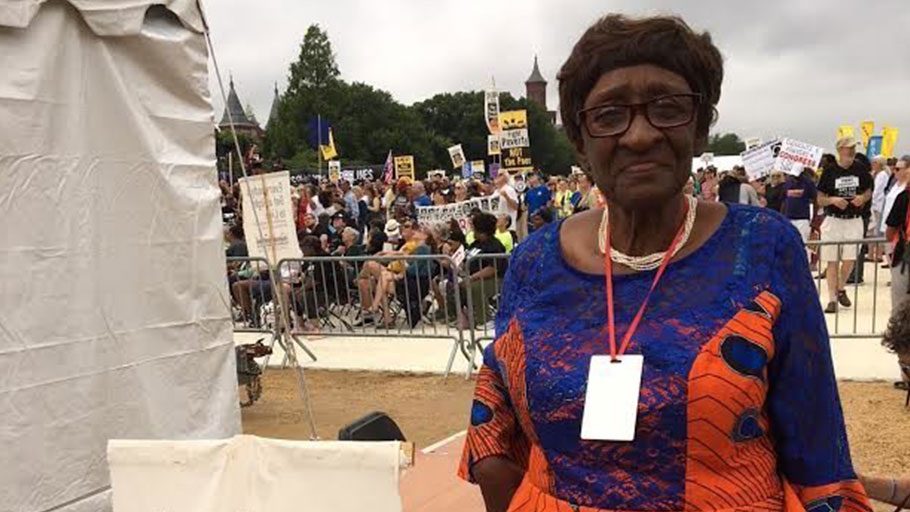 You Are Here: Home » Blog » News & Current Affairs » The Poor People’s Campaign Is Using Civil Disobedience to Win Back America

Louise Brown, 83, at the Poor People’s Campaign rally in Washington, D.C., on June 23. The movement aims to link a broad array of issues: systemic racism, poverty and inequality, ecological devastation and the war economy. Photo by Teke Wiggin

The 50-year-old anti-poverty movement has seen a revival in the era of Trump.

When lifelong civil rights activist Louise Brown took the mic at a Washington, D.C., rally on Saturday, she had a stark message for the thousands of people assembled before her to protest poverty.

“I’m 83 years old, and only the strong survive,” she shouted.

In a call to arms, she recounted how she and 11 colleagues led a successful hospital workers’ strike for better pay and treatment in 1969. The strike was championed by the Poor People’s Campaign, an economic justice movement founded by the Rev. Martin Luther King Jr. shortly before his assassination. 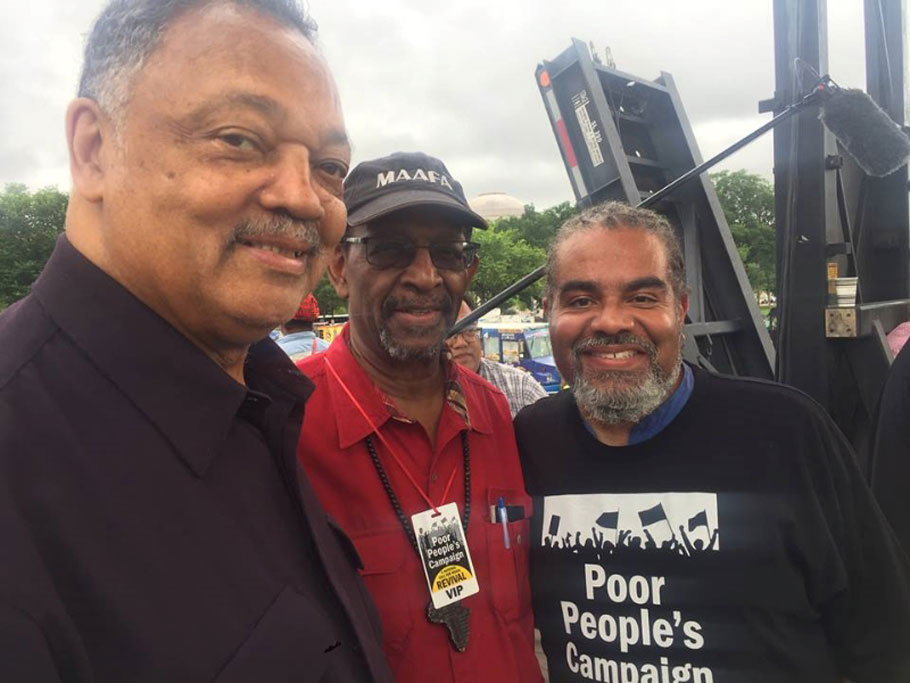 The rally was the culmination of a six-week civil disobedience initiative designed to rekindle the movement, now named the Poor People’s Campaign: A National Call for Moral Revival.

Weeks of protests, teach-ins, cultural events and religious services have stitched together many social justice groups and agendas, laying the groundwork for a massive mobilization of low-income voters, organizers said. But the campaign has struggled to compete for headlines with the roller coaster of Donald Trump’s administration.

Thousands of people rallied in the National Mall and marched on the Capitol for the event, capping a wave of civil disobedience that swept more than 30 states and resulted in the arrests of over 2,000 activists, according to organizers.

“This is your graduation service,” the Rev. William Barber, who co-chairs the Poor People’s Campaign with the Rev. Liz Theoharis, told the crowd. “And now it’s time to go to work.” 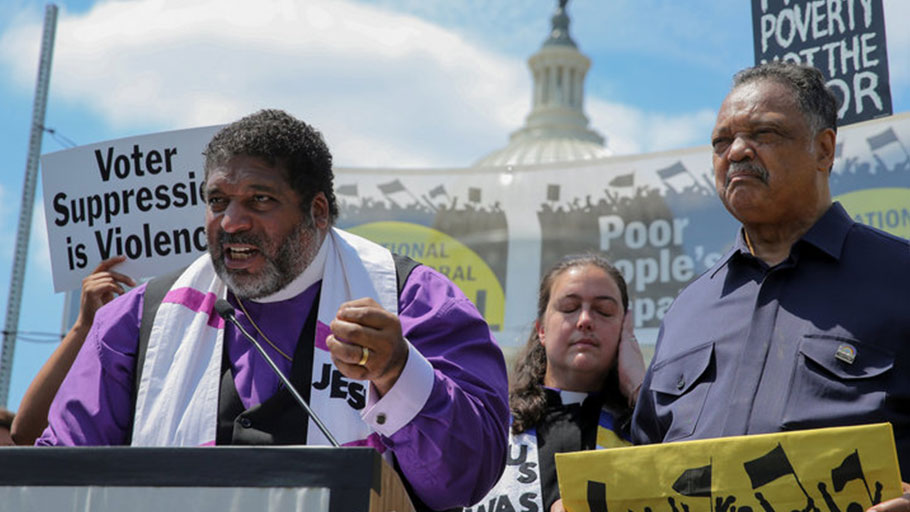 From left: The Rev. Wiliam Barber, the Rev. Liz Theoharis and the Rev. Jesse Jackson at a Poor People’s Campaign rally in Washington near the start of its six-week initiative on May 21.  Photo by Jonathan Ernst, Reuters

The Poor People’s Campaign is unfolding against a backdrop of soaring inequality. The U.S. has the highest youth poverty rate among Organization for Economic Cooperation and Development member nations and the highest incarceration rate in the world, despite laying claim to more than a quarter of the world’s billionaires, according to a  recent United Nations report.

Last year’s tax cuts “overwhelmingly benefited the wealthy and worsened inequality,” while the policies pursued by the Trump administration “seem deliberately designed to remove basic protections from the poorest,” the report said.

King helped found the Poor People’s Campaign in 1967 “to expand the Civil Rights Movement’s agenda to include an explicit focus on promoting multiracial economic justice,” Reuel Schiller, a legal historian at the University of California Hastings College of the Law, wrote in a recent essay.

The campaign sought relief for the poor, including a guaranteed minimum income, a massive federal jobs program and millions of low-income housing units. To press its demands after King’s assassination in April 1968, the movement set up a protest camp in the National Mall and later backed other struggles, including the hospital workers’ strike. But the campaign failed to win a massive expansion to the social safety net.

“The lesson of 1968 was how incredibly hard that was, and I don’t know if it’s become any easier,” Schiller said in an interview with HuffPost. 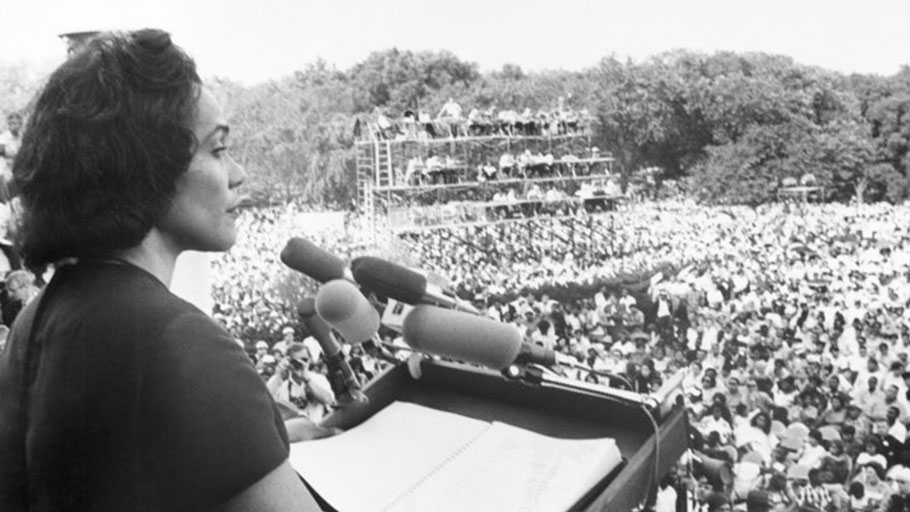 Coretta Scott King addressing a Poor People’s Campaign rally from the steps of the Lincoln Memorial on June 19, 1968. She told the nearly 50,000-strong crowd that “racism, poverty and war” combined to make matters worse for poor black and white people alike. Photo by Bettmann, Getty Images

The revived campaign differs strategically from its predecessor.

Faced with a federal government unlikely to take on new social programs, it focuses more on wins at state and local levels, such as higher minimum wages and expanded Medicaid.

The campaign also has sought to link an even broader array of issues than King did — bundled under the categories of systemic racism, poverty and inequality, ecological devastation and the war economy. Its demands are consequently more expansive than King’s — 100 percent renewable energy, gender identity equality, free public college tuition, an end to racist gerrymandering and statehood for Washington, D.C, among many others.

“We reject that we have to choose between advocating for voting rights and housing rights and living wages and an end to war,” Theoharis declared at the rally. “We know we need a movement to unite us all together.”

Jeff Brummer, a member of Veterans for Peace, traveled from Boston to D.C. for the rally. During the campaign, he said, he spent the night in a Boston park encampment to highlight the link between poverty and war.

He said he thinks that some of the hundreds of billions in military spending each year should go to social programs instead. 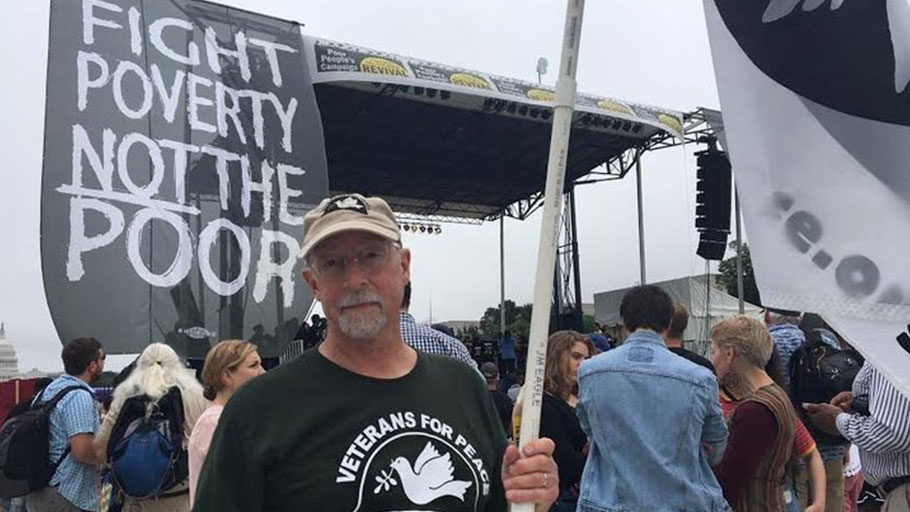 Jeff Brummer, a member of Veterans for Peace, traveled from Boston for the June 23 rally in Washington. Photo by Teke Wiggin

Schiller wondered if the campaign’s focus on many different issues might have diluted its short-term impact. But the strategy succeeded in cementing a wide-ranging network of activist groups that can build power for the poor, many participants said.

In Arkansas the initiative fostered ties between Christian, Buddhist, Muslim and Jewish leaders, as well as immigrant rights and criminal justice groups, said Solomon Burchfield, who helps head the Arkansas chapter of the campaign.

He was arrested while occupying the Arkansas Supreme Court to protest voter ID laws that disproportionately affect people of color, he said.

“I work at a homeless center, and I know hundreds of people who are American citizens,” he said. “They should be able to vote, but they don’t have IDs.”

While Burchfield considers the six weeks of protests a success, he wishes the initiative had received more media coverage. News outlets, he said, prioritize White House “sex scandals, firings and tweets” over issues such as poverty, war and well-being. 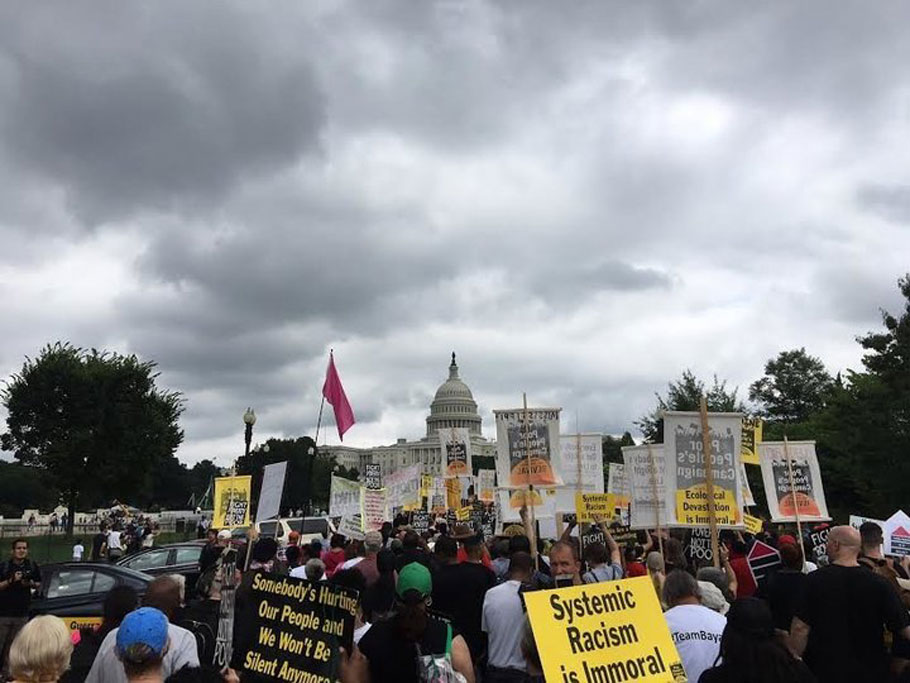 Nonetheless, the movement has called attention to the plight of poor people, said Gordon Mantler, the author of Power to the Poor: Black-Brown Coalition and the Fight for Economic Justice, 1960–1974. But he added that it is unclear whether this will translate into policy change.

Some lawmakers offered a ray of hope by listening to the stories of campaign participants in a congressional hearing last week, including testimony from an Alabama woman who lives in a mobile home with two kids and sewage in her yard.

The question that looms after Saturday’s demonstration is, “What do people do when they go back to their home communities?” Mantler said.

The campaign’s next goal is to launch a voter engagement initiative that will encourage low-income people to “put an end to the policy violence that is keeping them locked in poverty,” the Poor People’s Campaign said in a press release.

“We got the plan. We got a structure. We got to teach America,” Barber told demonstrators shortly before the march. “This is just the launch, but it’s not the end.”

HuffPost’s “This New World” series is funded by Partners for a New Economy and the Kendeda Fund. All content is editorially independent, with no influence or input from the foundations. If you have an idea or tip for the editorial series, send an email to thisnewworld@huffpost.com