The U.S.’s global standing plummets, while Americans yearn for a restoration

You Are Here: Home » News & Current Affairs » The U.S.’s global standing plummets, while Americans yearn for a restoration 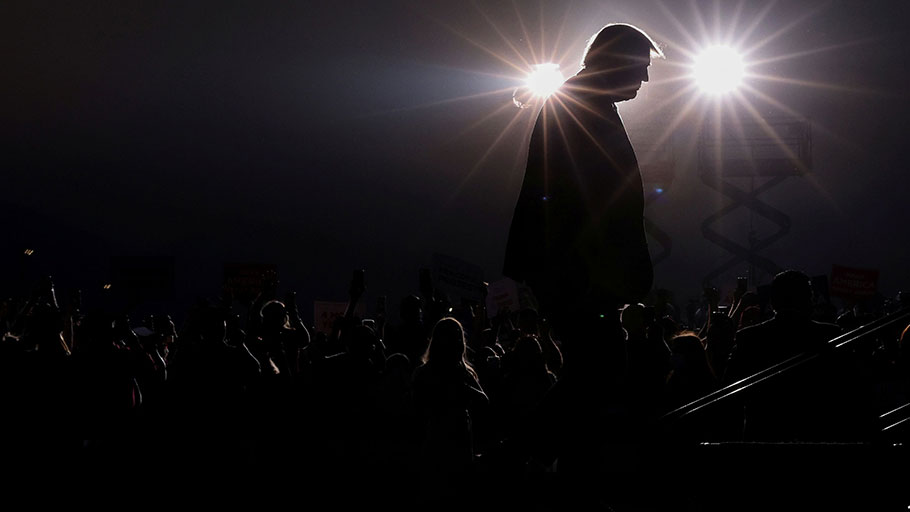 Two new polls show a decline in the country’s global reputation and deep American support for a return to robust diplomacy.

Under President Trump, global opinion of the United States keeps falling. That’s the conclusion of a new survey by the Pew Research Center, which polled attitudes in 13 wealthy democracies, including numerous staunch American allies. It found a significant decline in America’s reputation, thanks to both low opinion of Trump and the United States’ difficulties in handling the coronavirus pandemic. “In several countries, the share of the public with a favorable view of the U.S. is as low as it has been at any point since the Center began polling on this topic nearly two decades ago,” noted Pew in a report.

In Britain, for example, just 41 percent of those surveyed expressed a favorable opinion of the United States, a record low for the Pew project. In France, the same figure was at 31 percent, rivaling the lows Pew charted in March 2003, as Paris and Washington feuded over the American rush to invade Iraq.

“In at least seven nations, including key allies like Britain and Japan, approval ratings for the United States plunged to record lows,” wrote my colleague Adam Taylor. “In Germany, just 26 percent of the respondents held a positive view of the United States — the lowest rating since 2003, the year of the U.S.-led invasion of Iraq.”

I still think there is admiration for the United States, but it may be waning very quickly — especially if Trump gets reelected,” Sudha David-Wilp, a senior transatlantic fellow at the German Marshall Fund in Berlin, told Taylor.

Views of President Donald Trump are more positive among Europeans who have favorable views of right-wing populist parties, though confidence is still relatively low among all groups. https://t.co/qDmBNlUBQU pic.twitter.com/F6mp5iymiL

The United States has led the world in confirmed coronavirus-related deaths since April. That ignominious marker has disillusioned many citizens of countries closely allied with Washington. Ninety-three percent of South Koreans believed that the American response has been “bad.” They are certainly justified in thinking so, given how much better authorities in Seoul implemented safety measures, mass testing and contact tracing protocols. In the countries surveyed, a median of only 15 percent of respondents thought the United States had managed the pandemic well.

They were far less critical of their own governments as well as the country Trump often blames for the crisis: China. “These numbers are particularly low when compared to how publics think other countries and organizations have handled the outbreak,” Pew noted. “Consistently, the shares who think the U.S. has responded well to the virus are surpassed by those who think the same of China, the EU, the WHO and their own country.”

Perhaps the most damning indicator is that the publics surveyed, on the whole, placed less confidence in Trump doing “the right thing regarding global affairs” than autocrats like Chinese President Xi Jinping and Russian President Vladimir Putin. Trump and his allies routinely declare that they have made the world “respect” the United States again, but on this showing that doesn’t seem to be the case.

As the U.S. presidential election approaches, very few polled in Canada, Europe, or the Asia-Pacific have confidence in Donald Trump to do the right thing regarding international affairs. https://t.co/QgOso9RVYY pic.twitter.com/ScIcHDeCRs

Trump and his nationalist supporters may not be fussed about such dim views abroad. They may even argue that it’s a sign of the administration’s relative success in shaking up a global system they believe is no longer fit for purpose. On Tuesday, the World Trade Organization ruled that tariffs Trump imposed on China in 2018 ran afoul of U.S. commitments under global trading rules, a verdict that deepened the hardening view of Trump’s America as a rogue actor on the world stage. But it also bolsters the administration’s own contention that multilateral organizations like the WTO aren’t working in the United States’ national interests.

Yet even on that front at home, Trump and his allies are finding themselves in the minority. A separate survey of American voters published earlier this week by the Eurasia Group Foundation found majorities favored returning to international pacts that Trump jettisoned like the Paris climate accords and the Iran nuclear deal. More than twice as many people surveyed — 56 percent compared to 23 percent — wanted to increase the country’s diplomatic engagement with the world compared to those who wanted to decrease it.

Majorities also appear to favor redirecting the United States’ vast military spending toward investments at home. And such views are not necessarily hampered by partisan divides: A plurality of both supporters for Democratic presidential candidate Joe Biden and Trump favored “keeping a focus on the domestic needs and the health of American democracy, while avoiding unnecessary intervention beyond the borders of the United States,” according to the EGF study.

The pandemic probably plays a role here, too. “Despite the trillions of dollars the United States has spent on national security in the past two decades, it was not prepared to combat this wholly predictable threat,” wrote Rozlyn Engel of the Carnegie Endowment for International Peace in a recent study for the think tank. “Its emergency response was challenged by a heavy reliance on foreign medical equipment and highly interdependent supply chains. The pandemic may now leave American middle-class households more disillusioned with globalization and less willing to pick up the costs of military and diplomatic engagements, obligations to international organizations, and new trade and investment deals.”

Featured image: President Trump at a campaign rally in Reno, Nev., on Sept. 12.

Russian Media Is Rooting for Civil War in America: ‘The Worse, the Better’

Russian Media Is Rooting for Civil War in America: ‘The Worse, the Better’
We Need Your Support — Donate, Share, Sign-Up Ways to Support