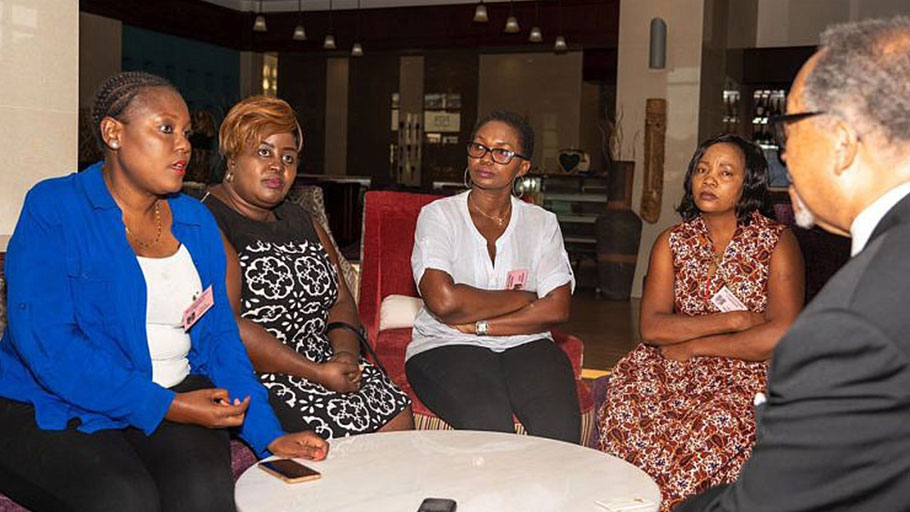 NNPA President and CEO, Dr Benjamin F. Chavis, Jr., (far right) invited Kettie Kamwangala (far left) and other Malawian women leaders for an open discussion while the ballots were being counted after a historic voter turnout across Malawi. NNPA PHOTO

LILONGWE MALAWI, AFRICA  — Throughout this southeastern African nation of nearly 20 million residents, the strength and resiliency of women is on display 24 hours each day. The sustainability of democracy in any nation can be evaluated by the inclusive leadership roles performed by women in its social, political and economic life.

According to statistics from the World Population Review, nearly half (49.1 percent) of Malawi’s population is comprised of women – several of whom work as many as three jobs while providing needed care for their husbands and families.

When the nation’s one-party era ended in the early 1990s, giving way to a democratic system, the nation’s fairer gender was at the forefront of social transformation.

Having elected a woman twice in its relatively short Democracy – H.E. Joyce Banda, as president — the country now awaits the results from the 2019 Tripartite election.

While the top three candidates this year are all men, women have again taken a leadership role in ensuring free and fair elections and they’ve been largely responsible for what’s believed to have been an electoral race free of determinative manipulation.

“The last election in 2014, we were just being informed and had a lot of trust in government but there were so many rumors of [corruption] and the president was sworn in during the night, it wasn’t a day event, and we felt there was no one here to fight for our rights,” said Kettie Kamwangala, the country director of Medobal Health, a company that provides healthcare solution in partnership with Malawian businesses and the nation’s Society of Medical Doctors to offer direct access to expert surgeons in India.

“This year, we had our eyes opened and we made sure that we were included from the beginning of the process in the printing of the ballots which was done in Dubai,” Kamwangala said.

As she sat alongside her colleagues, each of whom joined her in monitoring this year’s election, Kamwangala spoke favorably of authorities who worked to ensure that there was no interference with the election process, particularly making certain that ballots were properly delivered and counted.

NNPA President and CEO, Dr. Benjamin F. Chavis, Jr., invited Kamwangala and other Malawian women leaders for an open discussion while the ballots were being counted after a historic voter turnout across Malawi.

“The Malawi Defense Force and the Malawi police have done a really good job securing ballots,” Kamwangala said. “Most polling stations didn’t open at 6 a.m. as it was supposed to, but at 6:30. However, those that opened late stayed open late,” she said.

With isolated incidents of individuals attempting to bribe voters and some other complaints, Kamwangala said she and her team were able to direct election monitors to areas that could have been compromised.

“We were able to go to places and we observed that everyone could clearly see which vote went to which candidate and that no one was denied the right to vote,” Kamwangala said.

“Everyone had to sign off on the election sheets that went to the Tally Center,” she said.

Although some polling stations had overseers who would not allow Kamwangala and the rest of her monitors access to printed sheets where machines were failing, she said that also didn’t stop her team.

“We worked throughout the night until they allowed us to get the sheets. We were on the ground and we know how these polls come out and how the voting is done,” she said.

“We’re not worried,” she said.

“There was one officer in the village of Chichewa where, unfortunately, evidence showed he was involved in rigging, but he and another officer are now in police custody,” Kamwangala said.

And, that’s largely due to the diligence and hard work of Kamwangala and Malawian women, who have slowly become the nation’s pillars of democracy.

It is also why, during a closing speech at a Women’s Conference, Thenjiwe Mthintso, the Republic of South Africa High Commissioner to Malawi, continued to encourage Malawian women to remain firm.

Mthintso called for a non-negotiable attitude toward gender equality.

“Gender equality should never be something we negotiate,” Mthintso said.

“These are the issues every woman should stand behind and not let anyone try to reduce their importance. Women are able to do great things given the opportunity,” she said.