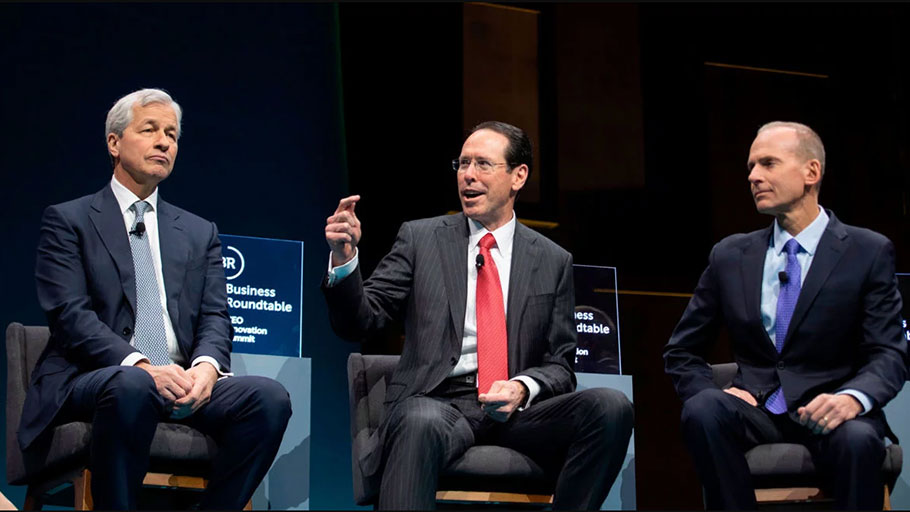 A Bunch of CEOs Want to Fix Capitalism. You Can’t Fix Anything Built on Slavery.

You Are Here: Home » Blog » Reparations » A Bunch of CEOs Want to Fix Capitalism. You Can’t Fix Anything Built on Slavery.

Anyone who cracked open the business pages of the major papers on Monday morning was confronted by an avalanche of self-congratulation from the CEO caste and its idolaters. The Business Roundtable (BRT) — a large cohort of massive businesses that has been bending the economy to its will since 1972 — announced that it is “rewriting how it views the purpose of a corporation,” according to The Washington Post.

“The leaders of some of America’s biggest companies are chipping away at the long-held notion that corporate decision-making should revolve around what is best for shareholders,” reported The Wall Street Journal. “No longer should decisions be based solely on whether they will yield higher profits for shareholders, the group said. Rather, corporate leaders should take into account ‘all stakeholders’ — that is, employees, customers and society writ large.”

The timing of this announcement is significant, coming as two of the most prominent Democratic presidential frontrunners — Elizabeth Warren and Bernie Sanders — have made breaking the grip of corporate and shareholder greed the hood ornaments of their campaigns.

Warren’s proposed Accountable Capitalism Act would redistribute large amounts of corporate wealth to the middle class, and Sanders has been preaching against the gospel of corporate avarice for the entire term of his public career. “The concerns of workers, not just stockholders, should be part of board decisions,” Sanders said to Walmart shareholders at their meeting in June. According to every reputable poll, much of the country is listening hard to what Warren and Sanders have to say.

“The new statement is the result of a yearlong reexamination,” reports Fortune, “that began with a testy dinner attended by a group of journalistic critics and involving a comprehensive survey of CEOs, academics, NGOs, and political leaders. ‘It has been a journey,’ says Johnson & Johnson CEO Alex Gorsky, who chaired the effort. But it was a necessary journey because ‘people are asking fundamental questions about how well capitalism is serving society.’”

If you find yourself underwhelmed with confidence at the sudden turning of this particular worm, you are in good company. The idea that a bunch of hyper-wealthy corporate CEOs are prepared to throw sand in the gears of a system that has served them so well is harder to swallow than a shard of hot glass.

The president of BRT is Joshua Bolten, former White House director of legislative affairs under George H.W. Bush and former chief of staff under George W. Bush. Bolten is a former executive at Goldman Sachs, the corporation whose monumentally fraudulent mortgage practices were instrumental in bringing about the financial crash of 2008.

I believe a group of CEOs is going to reform U.S.-style capitalism about as much as I believe Donald Trump’s estimations of inauguration crowd sizes.

Bolten was critical of Donald Trump during the 2016 presidential election, but changed his tune in 2017 after being chosen to lead BRT. “Lots of stuff gets said in campaigns,” he said at the time. “That was then, this is now.”

Beyond the unprosecuted corporate brigands captaining BRT, there is its ruinous history to consider. Since its founding, the operating ethos of BRT has been rooted in the first rule espoused by conservative economist Milton Freidman: “There is one and only one social responsibility of business — to use its resources and engage in activities designed to increase its profits so long as it stays within the rules of the game, which is to say, engages in open and free competition without deception or fraud.”

The CEOs who form BRT and those who follow their lead have managed to ignore the parts about playing by the rules, free competition and avoiding deception and fraud, mostly by purchasing politicians who rewrote those rules. Through this, they have done a bang-up job of increasing profits, to the point that the entire system now teeters on the verge of violent collapse due to the inequality their policies have fostered, again with the help of bought politicians.

Since its inception, BRT has been at the forefront of corporate resistance to a slew of pro-consumer, pro-union legislative efforts. The group was instrumental in thwarting Ralph Nader’s push for a consumer protection agency, helped water down the Humphrey-Hawkins Full Employment Act, championed Ronald Reagan’s corporate tax cuts, lobbied hard for NAFTA, and convinced Bill Clinton to pull the teeth from his plan to penalize companies for excessive CEO pay. They have consistently, and usually successfully, lobbied against the imposition of regulations on business by the SEC.

The systemic cruelty of U.S.-style capitalism is as old as the institution
of slavery in this country.

Suffice it to say, I believe a group of CEOs is going to reform U.S.-style capitalism about as much as I believe Donald Trump’s estimations of inauguration crowd sizes. It is within the realm of infinite galactic possibility that they truly mean well, but smart money says they know the popular resentment needle is buried deep in the red.

These people see pitchforks on the horizon, the inevitable endgame throughout history wherever and whenever economic inequality has grown so flagrantly gross. Thus, they offer this thin gruel to pretend at reform while lobbying against the public good behind walls fortified by fathomless greed and bottomless wealth.

The systemic cruelty of U.S.-style capitalism BRT would dabble at “reforming” has foundations that stretch far beyond the festival of corporate greed that marred the last quarter of the 20th century and scarred the first decades of the 21st. It is as old as the institution of slavery in this country.

Consider The New York Times‘s recent essay, “In Order to Understand the Brutality of American Capitalism, You Have to Start on the Plantation,” published on August 14. Before there were banks as we understand them today, before New York City became a global financial juggernaut, before the middle class became familiar with the concept of a mortgage, there was chattel slavery and a U.S. economy based on the relative worth of human beings trapped in forced bondage:

Those searching for reasons the American economy is uniquely severe and unbridled have found answers in many places (religion, politics, culture). But recently, historians have pointed persuasively to the gnatty fields of Georgia and Alabama, to the cotton houses and slave auction blocks, as the birthplace of America’s low-road approach to capitalism.

If today America promotes a particular kind of low-road capitalism — a union-busting capitalism of poverty wages, gig jobs and normalized insecurity; a winner-take-all capitalism of stunning disparities not only permitting but awarding financial rule-bending; a racist capitalism that ignores the fact that slavery didn’t just deny black freedom but built white fortunes, originating the black-white wealth gap that annually grows wider — one reason is that American capitalism was founded on the lowest road there is.

This essay should be required reading in full for each and every person on the North American continent. The morals and practices adhered to by the CEOs of BRT and the other corporate capitalists of the United States were formed in the cotton fields of the South, and in the textile mills of the North where the product of that misery gave rise to the first factories ever known. Thomas Jefferson, author of the Declaration of Independence, mortgaged 150 enslaved people to fund the construction of Monticello. Before it was a center of world finance, Wall Street hosted the Municipal Slave Market.

Slavery in the U.S. touches every aspect of the way this country functions, including our brutal version of capitalism. Some of these titans of industry may not know the roots of their surpassing prosperity — this history has been deeply and purposefully buried literally for centuries — but it is fact more than 400 years in the making. A bunch of corporate CEOs tinkering around the outside edges of the crisis that is U.S.-style capitalism itself quite simply will not get it done.

When the revolution comes, it will be from the bottom up, and it will be far more than a PR stunt. It will be a fundamental reimagining of economic and social justice thoroughly divorced from the imperative of the slaver’s lash and the shareholder’s cash. It is well that BRT sees the writing on the wall. That they are reading it wrong is merely par for a very long course.