You Are Here: Home » Reparations » A Slave Rebellion Rises Again 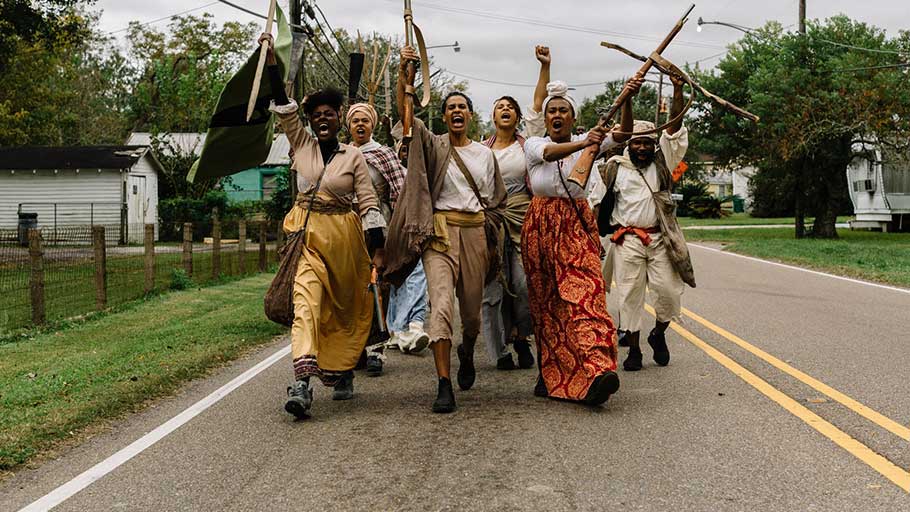 Some 500 enslaved people revolted in Louisiana but were largely ignored by history. Two centuries later, an ambitious re-enactment brings their uprising back to life.

LaPLACE, La. — The insurgents, dressed in the linen uniforms of slaves and wielding clubs and guns, swarmed the sprawling white plantation house and attacked its owner. The anger and resentment that had grown over years of oppression had boiled over into an uprising.

The rebels and slave owner were performers — actors, students, engineers and teachers who had been enlisted in the ambitious undertaking on Friday to recreate a rebellion in 1811 in which some 500 enslaved people of African descent marched from the sugar plantations along River Road to New Orleans.

The re-enactment, led by the New York artist Dread Scott, excavated the memory of an event that organizers saw as an inspiring display of courage. The uprising ultimately ended in bloodshed and settled into a chapter of history that was largely ignored for two centuries. 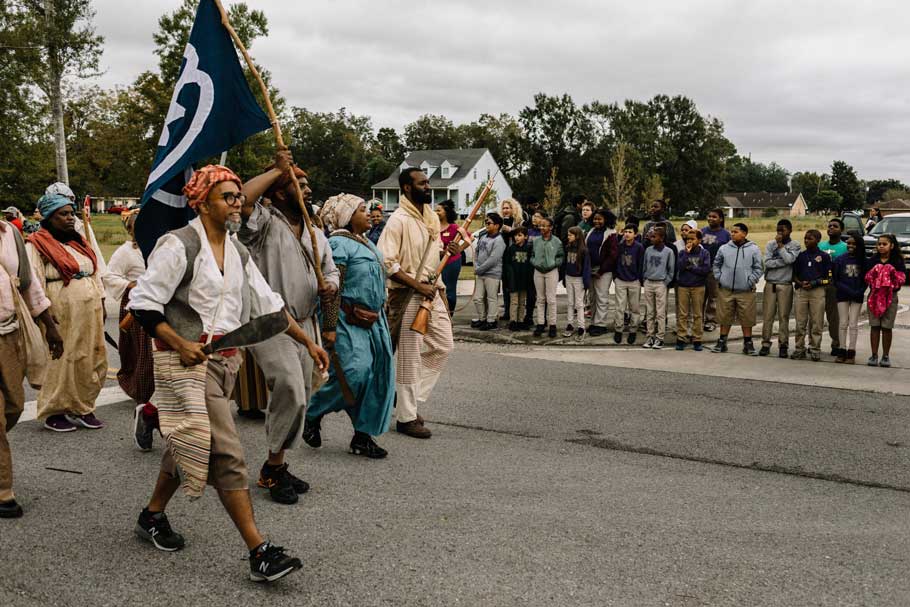 The artist Dread Scott, wearing a vest, led the event. Mr. Scott is known for work that often highlights injustices endured by African-Americans. Photo by William Widmer for The New York Times

“Join us!” the rebels chanted as they pushed down paved roads lined, in some places, with modest crowds of onlookers and bewildered residents who peered out their windows at the spectacle.

Ty’ki Clayton, 18, tried to hop in. “The cop told me I can’t walk in it,” said Mr. Clayton, an aspiring rapper who goes by Chase That Bag. Even so, he was pleased to watch it pass. “I mess with that,” he said.

“It’s beautiful,” added Trevon August, 33, who had arrived with Mr. Clayton on an all-terrain vehicle.

The 26-mile march, a re-enactment of the 1811 German Coast Uprising in southeast Louisiana, began Friday morning and will conclude Saturday. It was timed to the 400th anniversary of the arrival of enslaved Africans in Virginia, a moment that has ignited considerable reflection about the specter of slavery still hanging over the United States and the depths of its influence. 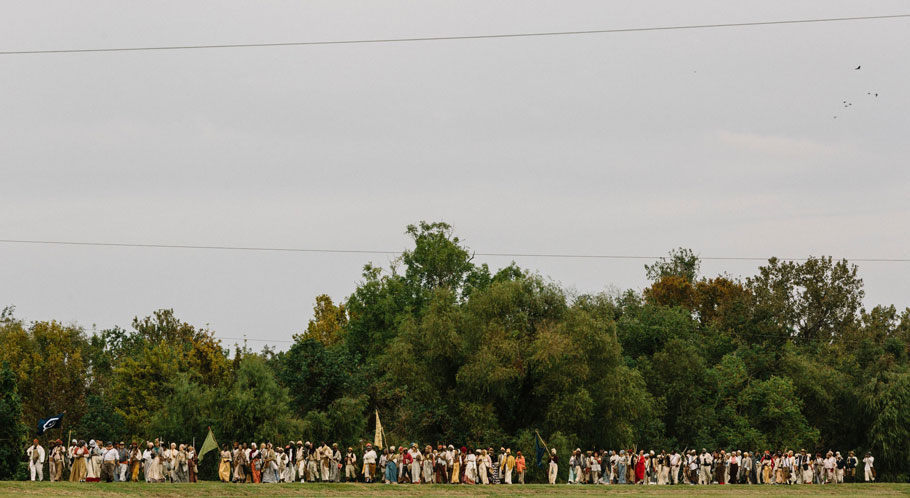 Hundreds of performers were involved in the project, which took six years to orchestrate. Photo by William Widmer for The New York Times

The project is daring in its scale, standing as one of the most expansive creations of Mr. Scott, an artist known for work that often highlights the injustices endured by African-Americans. Organizers said that the rebellion had never been re-enacted on such a vast scope, taking six years to orchestrate and involving hundreds of performers on foot and horseback.

“Close your eyes and imagine hearing that come,” Suzanna Alexander said as she stood bundled up as the marchers approached from a distance. “Can you imagine that?”

She explained her good fortune: Her aunts had been schoolteachers and she was innately curious, meaning she had long ago dived into this history. Many others had no idea. 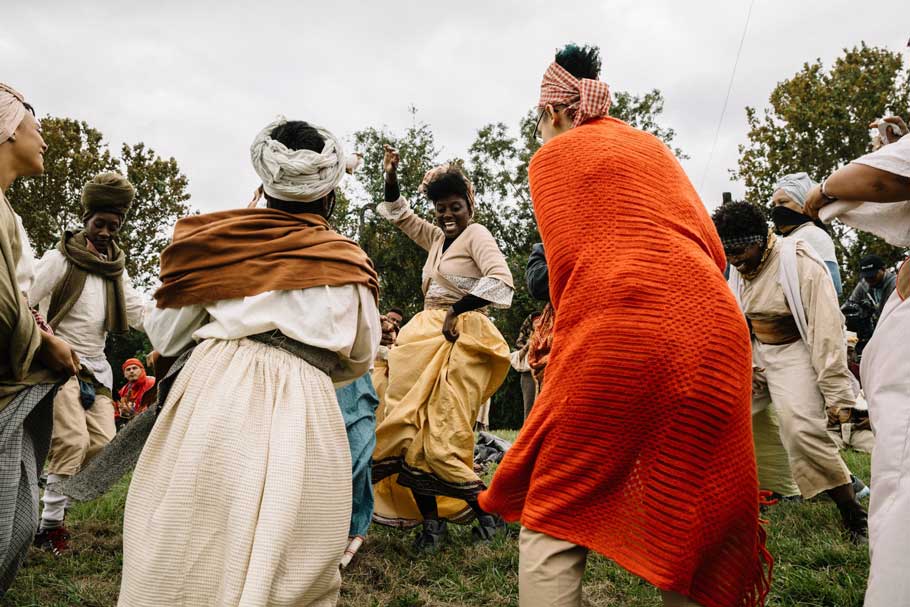 Like the original rebels, the performers carried cane knives and the women wrapped their hair in scarves. In one deviation from history, they were allowed to wear sneakers. Photo by William Widmer for The New York Times

“This is the first time I’m hearing of it, and I’m 67,” said Michael Sylve, a retired plant worker, who had come with Ms. Alexander.

Ms. Alexander, 56, was delighted by the display but also disappointed. The performers in the re-enactment far outnumbered their audience. Students at a school along the route came out to watch, along with other neighbors. Yet the rest of the onlookers, for the most part, included an artsy crowd from New Orleans and journalists who had traveled from out of town.

Ms. Alexander, a retired accountant and caretaker for her ailing father, drives for Uber on the side and heard about the event from a passenger. 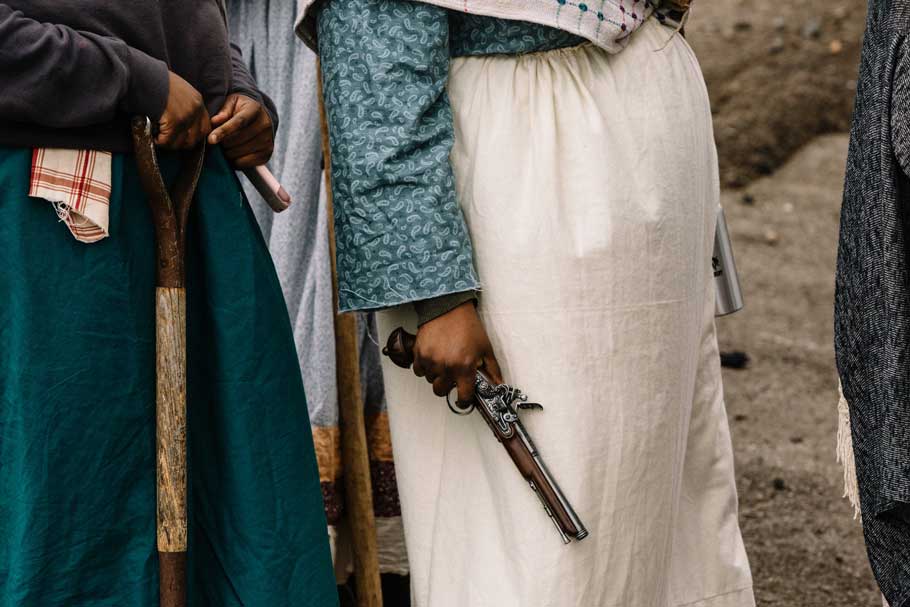 In the 1811 rebellion, slaves killed a plantation owner and his son and then set off toward New Orleans, carrying weapons and recruiting others as they marched. Photo by William Widmer for The New York Times 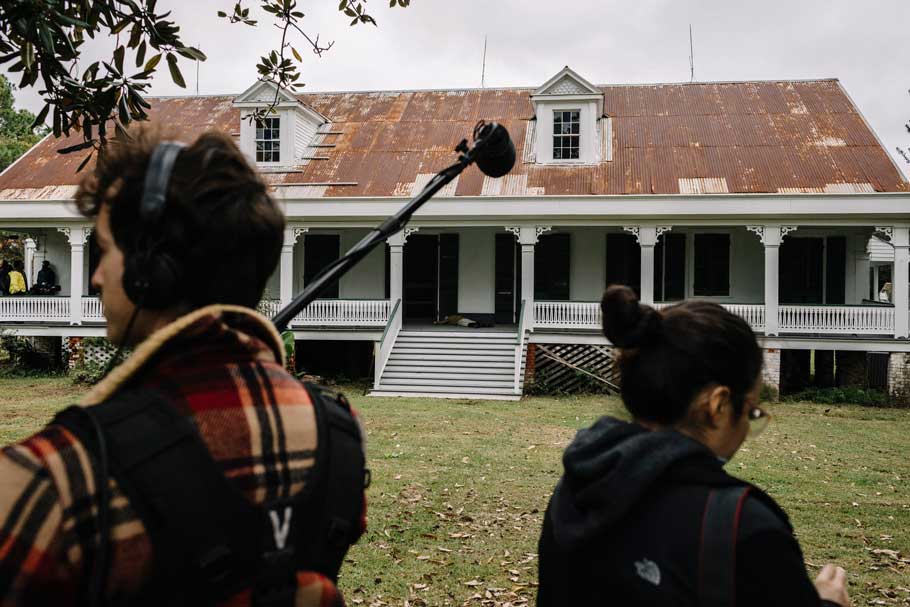 Onlookers included local residents, plus an artsy crowd from New Orleans and journalists who had traveled from out of town. Photo by William Widmer for The New York Times

“Every child from St. James and St. John’s Parishes should be out here watching,” she said, wishing that there had been more community participation and that organizers had done more to broadcast their plans.

“Some Oprah money behind it would make it a bigger production,” she said. “We need some Hollywood money to tell the real story. The world needs to know.”

The performance was conceived, in part, to demonstrate how the ghosts of slavery have endured; the institution itself is gone, but the animosity and oppression have evolved and lingered. Staging a provocative revival of a violent rebellion, recounted in unsparing detail, stirred fears that the performance might turn into a very real confrontation. 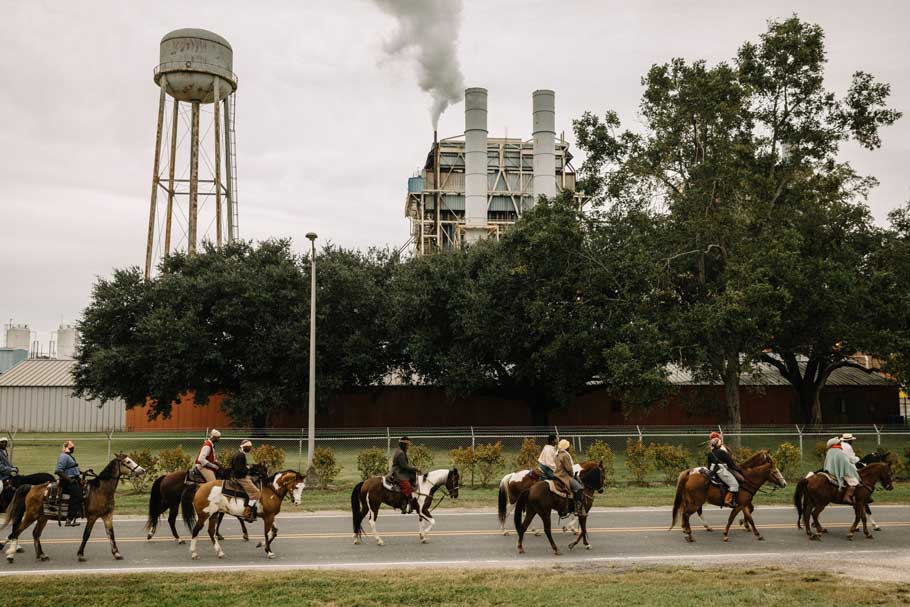 Refineries and working-class neighborhoods have replaced the sugar fields. Photo by William Widmer for The New York Times 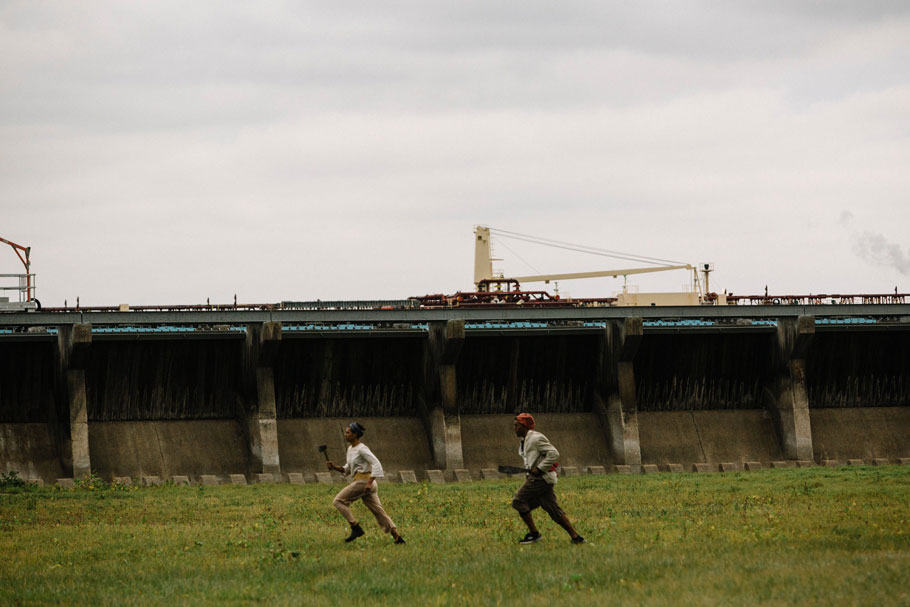 Re-enactors ran across the Bonnet Carre Spillway in Norco, La. Photo by William Widmer for The New York Times

“I think it’s authentic-looking,” Mike Remondet, a retired maintenance supervisor, said after he pedaled over to the plantation house on his bicycle. “I just hope it doesn’t create any turmoil with the races. We usually get along pretty well.”

Instead, tension was limited to snarled traffic from a construction project that some attributed to the roads being briefly closed for the procession. The march was met mostly with curiosity and cheers. Many marveled at the rebels’ stamina, in making it as far as they did.

“The power of freedom will give you strength,” said Jimmie Young, a disabled Vietnam veteran.

The rebellion began on a rainy night in January 1811, at a plantation in St. John the Baptist Parish, west of New Orleans. A group of about two dozen slaves attacked the plantation’s owner and his son and then set off River Road toward New Orleans, carrying cane knives, clubs and guns and recruiting others as they marched. It ended in death for many, but the effort was not entirely futile, as historians said it undermined the notion of the “happy slave.”

Refineries and working-class neighborhoods replaced the sugar fields. Still, like the original rebels, the performers on Friday carried cane knives and the women had their hair wrapped in scarves. To their relief, in one deviation from history, they were allowed to wear sneakers. Some of them acknowledged that even they did not know the history. 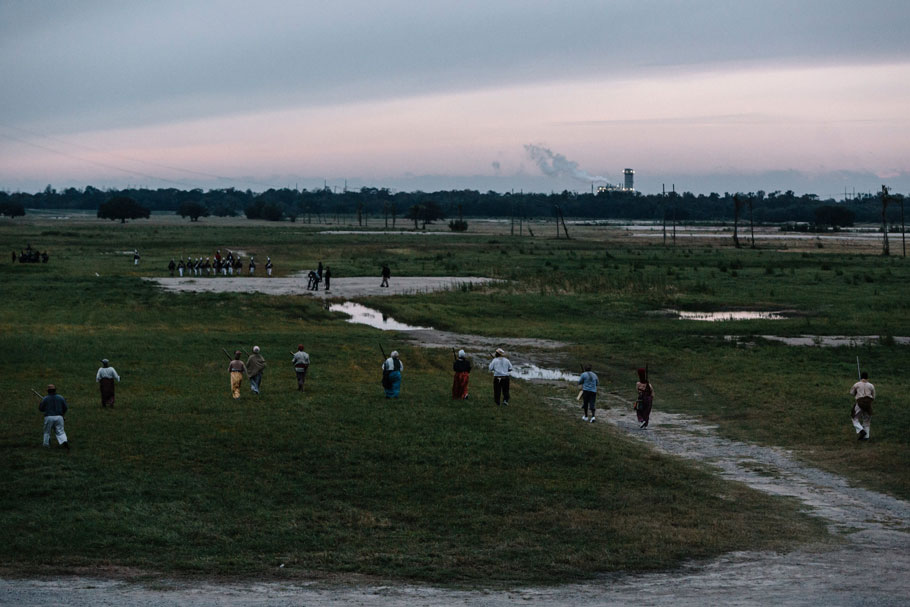 A battle scene in the Bonnet Carre Spillway. Photo by William Widmer for The New York Times

“Were they killed?” one marcher asked.

“They all got killed,” another replied.

Angela LaFonta, 45, found the march through a website advertising acting roles. It was educational, she said, yet also extraordinarily difficult to confront an ugly history in which her ancestors had been robbed of their humanity and their lives.

“You have to be in character to do this,” she said during a break in the procession — a break she imagined the original rebels did not have.

“When you’re out there and actually marching, it brings you back to that trauma,” said another performer, Scierra LeGarde, 28. “It shows the resilience of who these people were — and are because they live on through us.”

The atmosphere was bleak, the afternoon gray and chilly. They had many miles to go and scenes of violence and defeat awaited them. Yet, like the rebels they portrayed, the group was defiant. They pressed ahead. 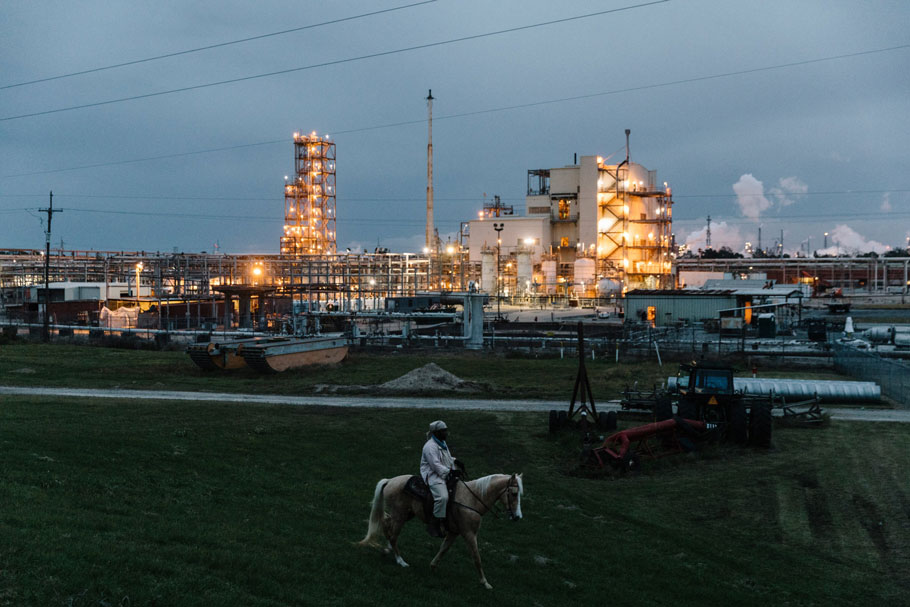 The performance was conceived, in part, to demonstrate how the ghosts of slavery have endured into the present. Photo by William Widmer for The New York Times

Featured image: Performers in a reenactment of an 1811 slave rebellion marched through LaPlace, La., on Friday. Photo by Widmer for The New York Times